In Memory of Jim Barbero 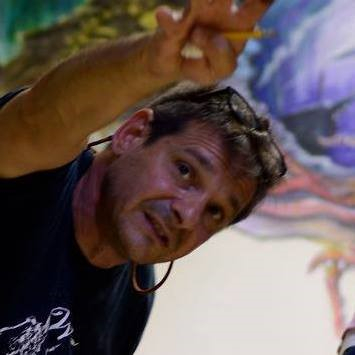 In summer 2020, the Digital Scholarship Lab lost a dear member of its team, Jim Barbero. Jim held a Bachelors in Arts degree from Buffalo State and had been a visual artist and teacher for 25 years. He worked for many clients nationally and internationally over his career on projects that span the digital and traditional arts.

Jim joined UofR in 2014 as a Visual Technologist working for Art & Art History, but his main home was as part of the Digital Scholarship Lab. Jim worked tirelessly to build a community at the Rettner Video Studio, offering workshops in various aspects of film production and working with faculty to host classes and talks in the space. Jim was a talented and creative visual artist. He contributed to numerous digital scholarship projects for the library and UofR faculty, often bridging the gap between the arts and sciences.

One example of Jim’s artistry and contributions to faculty research was a 3D model of an mbira for Sekuru’s Stories. We tried 3D scanning the mbira, but it was difficult to capture all of the details of the instrument. Jim ended up recreating the mbira from scratch, which resulted in a beautiful and incredibly faithful representation of an mbria made by Sekuru Chigamba in 1979.

Jim’s creativity spilled out in other aspects of his life and work at UofR. When a student who had worked on the Seward Project graduated, Jim would create a poster for them with their face photoshopped into an old photograph. The results were often hilarious. Beyond his visual talents, he was also an accomplished musician and played the mandolin and washboard (with a pair of meat packer’s glove with metal tips in them) in local bluegrass bands.

We will miss Jim’s curiosity, kindness, and welcoming spirit. He knew everyone at UofR. You couldn’t go anywhere with him on campus without him stopping to talk to several people. When I had a question about who to contact at UofR for some random thing, I would ask Jim because he always knew or knew who to ask to find out. Whether connecting people across campus, running with colleagues over lunch, or introducing another person to pawpaws, Jim was a people person.

Jim truly cared about the students at UofR, always going above and beyond to help them realize their projects. He recognized and appreciated students’ creativity and drive, often connecting students to faculty research projects and supporting their co-curricular interests. This is likely because he had two college students of his own at home, and was extremely proud of their accomplishments. It wasn’t uncommon to see Giacomo and Gianni hanging out with Jim on campus.

There are so many more stories we could share. It’s hard to articulate how much his loss will be felt on campus and in the community. He will be missed tremendously.