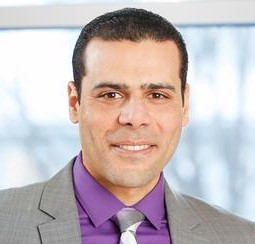 Dr. Ghazi MD, FEBU, MSc, received his medical education from Cairo University, Egypt in 2000, where he also completed his surgery training and Urology residency 2001-2005. Following his training he completed a series of worldwide fellowships in state-of-the-art minimal invasive Urological surgery, in Paris and Austria (2009-2011), where he received his accreditation from the European Board of Urology. He completed an Endourology and robotic surgery fellowship at the University of Rochester Medical Center, New York (2011-2013). He was appointed Assistant professor of Urology at the University of Rochester (2013).

Dr. Ghazi specializes in the diagnosis and minimal invasive treatment of urological cancers as well as complex stone disease. In addition to his clinical duties, he perused research grants in education, simulation research and surgical training. To further enhance his educational background, he was awarded the George Corner Deans Teaching fellowship (2014-2016), completed the Harvard Macy Institute program for Educators in Health Professions in 2016 and a Master’s in Health Professions Education program at the Warner School of Education, University of Rochester (2016-2020).

In 2015, Dr. Ghazi was appointed as the Director of Simulation Training for the Department of Urology. In this role, he collaborates with educators nationally, and internationally, in a variety of disciplines to enhance the role of simulation in surgical education. He founded and led a research laboratory staffed with a team of biomedical engineers that combine 3D printing, mechanical testing, and hydrogel polymer technologies to fabricate realistic procedural models that replicate the texture, appearance and tissue reaction of human organs. Furthermore, his educational approach to the development of these realistic innovative models has enhanced the efficiency, safety, and comprehensiveness of surgical training.

Dr. Ghazi was awarded several awards at international scientific and academic conferences as well as grants including a Clinical and Translational Science Award (2017), academic PI of a NIH, STTR grant, and PI of a NIH, NIBIB grant to evaluate the impact of his innovative simulations in improving surgical performance and their translational impact on patient outcomes. Dr. Ghazi believes in a reciprocal relationship between research, teaching & surgery, where each informs & strengthens the others. He has developed educational curricula seeking to improve and better prepare trainees for the operating room experience. He strives to produce academically rigorous research that is theoretically sound but translates directly into a safer surgical environment with reduced surgical errors and improved patient outcomes.

This series is generously supported by the National Science Foundation (NSF) Research Traineeship (NRT) program as part of the Interdisciplinary Graduate Training in the Science, Technology, and Applications of Augmented and Virtual Reality at the University of Rochester (#1922591).