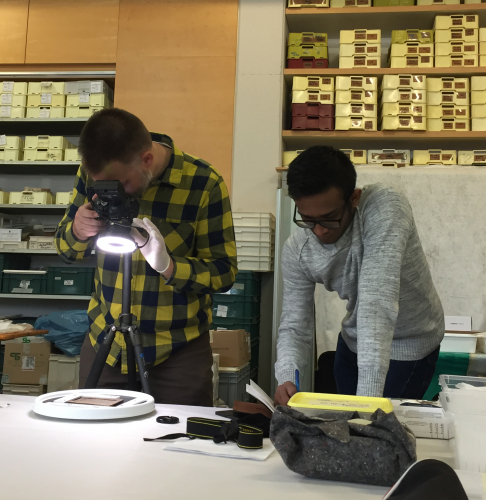 In the fall of 2018, I was part of a small research team, comprised of Classics Professor Nicholas Gresens, undergrads Elise Lia, ’20, and Shaim Mahir, ’21, that traveled to the province of L'Aquila in Southern Italy. The focus of the trip was to image ancient Roman writing tablets that had been found in 2013 in the bottom of a well at the Alba Fucens archaeological site.

Originally the tablets would have been covered in dark wax and the wax would have been etched with a stylus to reveal the light wood below, thereby creating a convenient medium for recording a message. The wax could be smoothed out and reinscribed repeatedly, whenever the writer needed a new surface. In the course of inscribing the wax, however, the writer would often etch into the wooden surface below, leaving a permanent mark in the wood. Although the wax no longer remains, the incisions from the stylus can still be seen. The tablets are undergoing conservation at the Museo Paludi di Celano, and we were invited into their conservation lab to image the tablets.

I was asked to join the team due to my knowledge of cultural heritage imaging techniques, specifically photogrammetry and reflectance transformation imaging (RTI).

The resulting files generated by both techniques have been loaded into a viewer designed by Digital Scholarship Lab programmer, Josh Romphf, that will allow scholars to view the information hidden in the wood.

Because the tablets were found in well water, which preserved them for the last 2,000 years, the tablets required conservation to stabilize the material before they could be left out in the open air. A half dozen or so tablets had gone through the process and were ready to be imaged. Professor Gresens and Shaim workedon photogrammetry, while Elise and I worked the RTI side of things.

Part of my role in the field is teaching students how to use digital cameras for imaging work. Elise had never used a digital single lens reflex camera (DSLR), or the RTI builder software created by Cultural Heritage

Imaging. We worked together throughout the week to build her confidence in using the tools so that she could do some of the imaging herself. RTI is a particularly nice imaging tool as it requires very little in the way of expensive or complex gear, it is feasible for students to learn how to do it, and buy their own setup.

I also taught the students the importance of proper data capture, backup and redundancy. These skills are integral to good research and are some of the things that can be overlooked or forgotten while in the field. My goal on these trips is to instill good research habits that they can carry forward into their own fieldwork.

Our approach to imaging the tablets was to start those that had evidence of writing visible to the naked eye, and then worked our way towards tablets with less visible markings. We had great success with the first few tablets, and were able to show them to the archaeologist serving as the Alba Fucens site supervisor. She was so impressed with the results that we were granted access to work with the tablets that were still soaking in conservation fluid awaiting preservation. Those tablets were nerve wracking to work with as they were fragile and needed to remain moist. Handling them felt a bit like trying not to break waterlogged wheat crackers.

Problem Solving in the Field

We hit a snag working with the wet tablets. We had not anticipated working with a wet, reflective surface, which was a problem for RTI in particular as the flash reflected as glare on the wetter places. Part of the challenge (and fun) of field work is preparing for unknown, and building a kit that provides tools to work though problems and issues as they arise in the field where you’ll have limited resources. Before we’d left, I had run a few tests with a fake tablet using a different camera with a polarizing filter (a filter that goes on the lens that suppresses glare and manages reflection). After looking at the results and consulting with colleagues, I decided that it didn’t improve the image quality and there was no reason to invest in a filter for the camera we would be taking to Italy.

What I hadn't counted on was that we’d be working with wet objects that would have benefited from the glare reduction that such a filter could offer. The other element that we had not anticipated was that the tablets would change in appearance as some of the water evaporated off of them during imaging. While on site, I reached out to friends and colleagues in the imaging community for help, but beyond moving quickly while imaging and making some minor adjustments in the camera, there wasn’t a lot we could do to minimize glare. Despite the fact that we didn't come up with a great solution, I appreciated the time and expertise the imaging community offered us while we were on site and under a time constraint. It speaks to the generosity of imaging scholars and digital scholarship programmers.

Outcomes and Next Steps

By the end of the trip, we had imaged 11 tablets that the students and Professor Gresens will now study and translate. Our hope is that we will be able to travel back to the museum in the future to image more of the tablets that had not yet been preserved, and those that were problematic due to their reflectivity.