Looking back on legislative advocacy for the women of Afghanistan 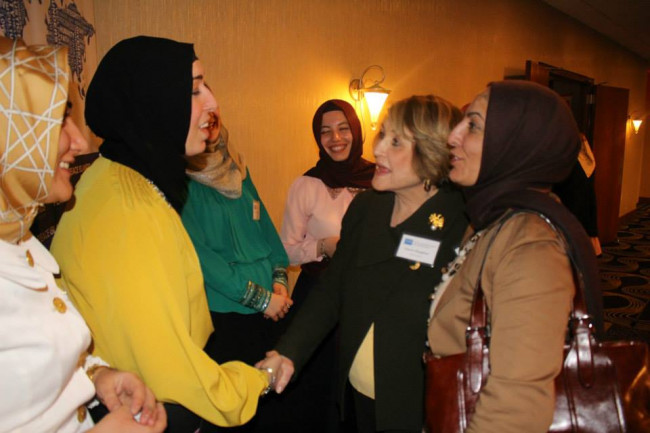 When the Taliban gained power in Afghanistan around 1996, they reinstated ancient laws that infringed on the rights of Afghani women. As soon as a year later, Congresswoman Louise Slaughter began working to “highlight the horrible plight of women” under the Taliban regime.

In February 2002, in her monthly newsletter, Slaughter reflected on House Resolution 281 that she recently (November 2001) introduced in Congress. She wrote, “Never again should Afghani women—or any women—be banned from receiving an education, holding a job or engaging in everyday conversation outside the home.” In a 2001 article, Maureen Dowd observed that Afghan women were essentially “swaddled breeders under house arrest” and compared their status and treatment to that of Margaret Atwood’s Handmaid’s Tale. Among a host of talking points in a letter to President George Bush, Slaughter asked that he consider the women and pointed to the fact that “To be a woman in Afghanistan under the Taliban’s rule is to be considered little more than chattel[.]”

All that Slaughter worked for and the strides that have been made on the behalf of women in Afghanistan over the years were put in jeopardy when the United States Military withdrew from the country. Activists, pundits, and politicians wonder if, indeed, a repeating history of struggle for women’s rights in Afghanistan is on the horizon. What will a Taliban regime in Afghanistan look like for women now? What will it be like for the generation of women who never experienced the Taliban’s first reign? Will women be forced out of the public sphere and back into their homes, unable to work and speak freely or move about without constant fear of punishment, or possible death?

No one can be certain what will happen to Afghani women. If history repeats itself, then we can only hope that decision-makers remember the women as Slaughter and others asked 20 years ago. They would also be wise to revisit the advocacy woven in a resolution that Slaughter and Congresswoman Ileana Ros-Lehtinen submitted to Congress on November 7, 2001.

During a press conference, Louise Slaughter offered the following speech.

Good afternoon. Thank you for joining us here today to call for the restoration women’s rights in Afghanistan.

Since the Taliban takeover in 1996, the women of Afghanistan have lived in absolute fear. To be a woman in Afghanistan under the Taliban’s rule is to be considered little more than chattel. Women are banned from receiving an education, holding a job or engaging in conversations outside the home. They can be arrested for venturing outside their house without a male relative, or stoned to death if they are married and accompanied by an unrelated male. Under these inhumane conditions, women die for lack of basic health care or find themselves unable to feed themselves or their children.

Life has not always been this way in Afghanistan. Prior to the Taliban’s rule, women held careers as doctors, nurses, and teachers. They were free to exercise their rights as citizens, move about, and speak freely. Many of them were considered leaders in their communities, educated, and well-respected. Since 1996, these women have gone into hiding. They are forced to be mere shadows of their former selves.

Small groups of heroic women are currently working against almost impossible odds to improve women’s lot in Afghanistan. At risk of their own lives, these clandestine organizations run schools for refugee girls, provide basic health care, and operate handicrafts, carpet and tailoring workshops. A few incredibly courageous women have even smuggled video cameras under their burqas to record for the outside world the dreadful scenes of abuses against women.

My friends, it was once said of our own country that, ‘A house divided against itself cannot stand.’ Afghanistan is a nation divided against its own women. And it cannot survive, now or in the future, if this situation is allowed to continue.

The resolution we are introducing today calls on the President to ensure that any future government established in Afghanistan protects the human and civil rights of women. The women of Afghanistan represent a tremendous resource for their nation’s recovery. We must ensure that they are full, active participants in any Afghani government.

I am delighted to be joined today by my colleague, Rep. Ileana Ros-Lehtinen of Florida, in introducing this resolution. Rep. Ros-Lehtinen is known as a passionate advocate for human rights in Congress.

We are also honored to be joined by Ms. Jaberkhil, who will describe first-hand the situation of women in Afghanistan. I ask for your understanding of the fact that Ms. Jaberkhil is using an alias, because speaking out under her own name would place her life in danger.

I am also very pleased to have with us Eleanor Smeal, President of the Feminist Majority Foundation, which had done ground-breaking work in publicizing the plight of women in Afghanistan and assisting Afghan women’s groups.(Yield to Rep. Ros-Lehtinen)

Congresswoman Slaughter had a deep concern for a multiplicity of causes and issues that affect women’s lives—domestically and abroad. There is no better example in the Slaughter papers than where it concerns the women of Afghanistan.

Below is a list of organizations and individuals who all appear in the collection, having engaged in communications, background organizing, and research for H. Res. 281.