Prior to joining Studio X for Voices of XR, Domingo talks zombies, hackathons, and increased access to video games 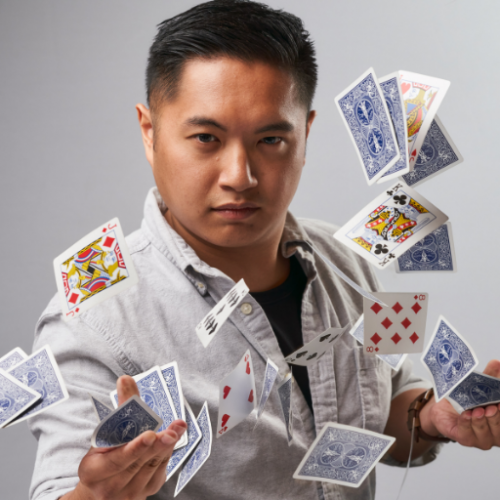 What if Eastman Quad had a hedge maze and Wilson Quad had an in-ground pool? Rocky deserves his own statue somewhere, right? Couldn’t the tunnel system be a bit more expansive? These are the types of questions students were asking themselves during a recent hands-on workshop held by Studio X, the University of Rochester’s hub for immersive technologies.

The workshop had students creating their “dream campus” with the help of Unity, a game engine developed by Unity Technologies (UT) that can be used to build virtual worlds. On November 18, Carl Domingo, the global student programs manager for UT, will join Studio X for the second edition of Voices of XR, a new speaker series that brings immersive technology scholars and professionals to the University community.

On Twitter, you shared that you found Carl (Chandler Riggs) from The Walking Dead, using Unity on Twitch. So, the obvious question is what would be your strategy for surviving a zombie apocalypse?

I have always been a huge advocate of "hoping for the best, preparing for the worst." I think something that I learned living in both Rochester and San Francisco is that you should always be prepared to stick it out (like in the case of a blizzard) or get ready to move (in the case of an earthquake). Aside from those basic survival philosophies, I think it would really depend on what kind of zombies. Using lessons from Shaun of the Dead or The Walking Dead, you should get a group of friends and work together to survive. If we're talking about fast zombies, then you should follow “Rule #1” from Zombieland: Cardio—if you can make space from the zombies, you're golden. If you can't outrun them, probably take a page out of I Am Legend, and use your brain to outsmart them. The biggest takeaway here is that I spend far too much time watching shows and movies about zombies.

There’s a Medium article about hackathons that starts with the question “Why are students willing to forego a weekend of college partying to build things?” What’s your answer to this question?

People will say college is all about partying, you can "party" in many ways. It boils down to what people enjoy doing with their free time. I attended my share of traditional parties in college, but I also enjoyed spending time with my friends to build something silly and weird. Even looking at my free time as a working professional, there are some days where I hang out with friends at a bar or a restaurant, or play a board game, but there are other days where I go work on a beer brewing or home automation project with other friends. Hackathons and game jams give people an outlet to feed their personal curiosity and creativity—in a way that they may not get to in a classroom setting—and be in a shared space with other likeminded people, just like they would at a party.

We’re going to assume that anyone who finds their way to Unity Technologies has played a few video games. What would you like to see more and less of in future games?

That's a pretty safe assumption. We actually have a room with a bunch of different consoles and VR headsets, along with our own crew of Super Smash Bros. players. I think that we're already in an amazing ecosystem of diverse games—at least, there are more than there were ever before. Back when I was studying at RIT, the games everyone played at the time were along the lines of Battlefield, Gears of War, and Call of Duty. Now, you have these amazing independent games or really creative AAA titles that are not like the status quo. I think of projects like The Last of Us or Untitled Goose Game. What I would really like to see is more accessible games that don't require a player to have a gaming PC or a console. Mobile devices are getting more and more powerful every year. I spend time thinking, “How can we create really deep, meaningful games that are able to reach more people around the world?” ∎

For more information on Carl Domingo’s talk or the Voices of XR series, contact Meaghan Moody at mmoody@library.rochester.edu. Enjoy reading about the University of Rochester Libraries? Subscribe to Tower Talk.