The Nashville-born author talks about being alone in the pandemic, Zoom intrigue, and Fisk University. 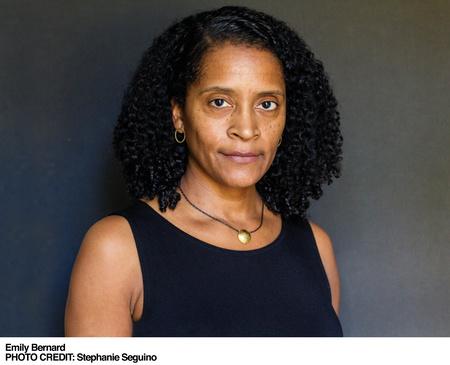 Since early March, Black lives have been at the forefront of many Rochester minds, grappling with the deaths of Breonna Taylor, George Floyd, and most recently, one of their own community members, Daniel Prude. These events, and subsequent demonstrations and protests held across the country, have been catalysts for new conversation on and examination of the Black experience. River Campus Libraries’ next Neilly Series author, Emily Bernard, explores the subjects of race and being Black in America in her memoir Black Is the Body: Stories from My Grandmother’s Time, My Mother’s Time, and Mine.

Inspired by a random stabbing in a New Haven café, Black Is the Body covers Bernard’s experience growing up Black in Nashville, her marriage to a white man, and other topics rooted in race through 12 essays. On October 14, Bernard will share what she’s learned about American race relations, the difference between a situation and a story, and the relationship between resilience, writing, and healing in a virtual Neilly Author Series lecture.

In advance of her talk, Bernard was kind enough to tackle three “serious” questions from Tower Talk Editor Matt Cook.

To cope with the pandemic, people have picked up new hobbies, baked a year’s worth of bread, invested in home gyms, and streamed hundreds of hours of television. What have you been doing to help you weather the current norm?

This may sound strange, but I am learning how to be alone. Now, I share my house with my husband, two daughters, as well as our dog and cats. So, I am rarely alone in a literal way, but all of this togetherness has actually forced me to confront how much my sense of self is bound up in my connections with others. I am working to cultivate stillness; even though I am trapped in the house as much as anyone else, I still find myself inclined to fill up my days with lots of activity. Being in a situation in which I am stripped of options and the large variety of company that I, in ordinary times, seek out, has taught me that what I actually need is less of everything that anyone else can give me, and more of what I can provide for myself.

Although the University of Vermont has reopened its campus, you, as the Julian Lindsay Green & Gold Professor of English, have undoubtedly had your share of Zoom meetings and classes. What is your biggest Zoom pet peeve?

I have done approximately one billion Zoom/Instagram/FaceTime interviews, book groups, readings, and discussions since the beginning of the COVID-19 crisis. Even after all of these months, I still find the paradox of remote intimacy mostly intriguing. When it comes to the classroom, Zoom meetings mean that we are inches away from each other, much closer than we would ever be in real life (this is particularly true for one-on-one meetings). At the same time, because most of these students I have never seen in real time, I have no idea how tall they are, or even really what they look like. I mean, I can see their faces, but knowing what someone looks like requires being able to see something other than their features. But as much as I miss getting to know my students in real time, I remain interested in this new way of relating. A few weeks ago, I might have responded to this question by saying, “I hate it when my students keep their cameras off and I can’t see their faces.” But a few weeks in, I’ve learned to accept this and find myself concentrating much more on the beauty of the writing I am teaching as opposed to the reactions of my students.

Nashville, Tennessee is perhaps most known for being a sort of Mecca for country music fans. As someone who grew up there, is there something else it should be known for instead?

Nashville is the site of some of the earliest important lunch-counter sit-ins and protests during the civil rights movement, spearheaded by Diane Nash and John Lewis, who were both students at Fisk. To me, Fisk University is the shimmering treasure of Nashville, one of the nation’s oldest HBCUs and the locus of layers of black political thought and creative innovation. I’m biased, maybe, because my parents both attended Fisk, and I grew up on their stories about all of the artists, writers, and leaders that it produced. They are my creative ancestors; all of my writing is just about trying to live up to the example they set. ∎

For more information on Emily Bernard’s lecture or the Neilly Author Series, contact Amy Reichman at amy.reichman@rochester.edu. Enjoy reading about the University of Rochester Libraries? Subscribe to Tower Talk.