Rare Books, Special Collections, and Preservations has collections that will help you celebrate and explore Black history in Rochester. 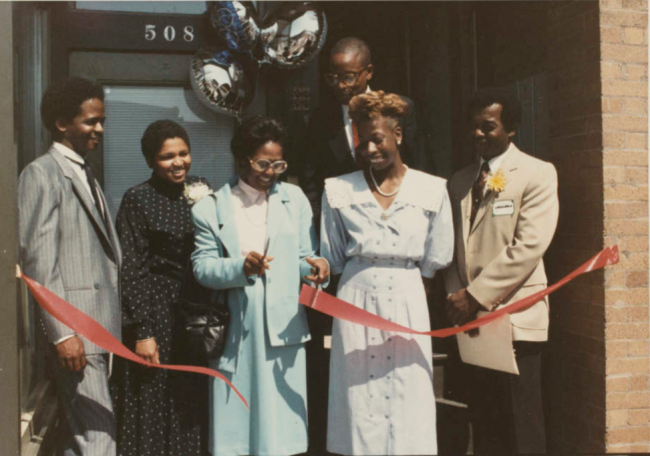 Next week, Americans begin their annual observance of the people, events, and achievements of African Americans that were a pivotal part of shaping U.S. history—Black History Month.

The U.S. first celebrated Black History Month in 1970, but its spirit is almost 100 years old, and for the entirety of that time, each year has had a theme, determined by the Association for the Study of African American Life and History (ASALH). This year’s theme is “The Black Family: Representation, Identity, and Diversity.”

Rochester’s Rare Books, Special Collections, and Preservation (RBSCP) offers several entryways into Black history in Rochester. Of course, there’s the wealth of Frederick Douglass material, much of which is viewable through the Frederick Douglass Project. There are also several lesser-known gems within RBSCP, such as the exhibit Celebrating Rochester’s Rocky Simmons. The exhibit, which tells the story of a dynamic Rochesterian and iconic figure in the Black community through photographs, is especially appropriate for the Black Family theme, as Simmons had strong family values.

“Anyone could call a family conference,” remembers Simmons’ daughter, Roxie Simmons Sinkler. “We learned to listen to each other and how to conduct a meeting. [Rocky] would say, ‘Family is everything, and without it you have nothing.’”

If you want a closer look at Rochester during Simmons’ time, take a look at the 19th Ward Community Association of Rochester Papers. This collection includes letters, photographs, newspaper articles, grant proposals, and more from 1965 to 1998. You could also dig into the extensive material covering the life and career of the first woman of color elected to the Rochester City Council, and later, its first African American president through the Ruth Scott Papers.

Another RBSCP rich source to consider is the Rochester Black Freedom Struggle Project. This online repository holds interviews with Rochesterians who were actively involved in the fight against racial discrimination in the 1960s and 1970s. One of the community activists is Dr. Walter Cooper, a research scientist at the Eastman Kodak Company. He was also chairman of the NAACP’s education committee from 1959 to 1965 and a founding member of the Rochester Urban League. Cooper donated his papers to RBSCP to be used for research and teaching.

In 2018, Seyvion Scott ʼ19 worked on a project with Margarita Guillory, former assistant professor of religion, called “Digitizing Rochester Religions.” Part of Scott’s work required her to read and summarize material from the Cooper Papers. If you’re looking for a place to start your celebration of Black History Month in the spirit of this year’s theme, this is it.

Here’s a brief excerpt from Scott’s RBSCP blog post, “A Look into the City of Rochester’s Past,” on her work:

Dr. Walter Cooper and Constance Mitchell had a relationship with Malcolm X. Constance Mitchell was a local Civil Rights activist in Rochester, NY, and served on the Board of Monroe County Supervisors. According to the interview with Dr. Cooper, Mitchell’s former address, 36 Greg Street, was the meeting place for dignitaries to talk about pressing social issues. In a Democrat & Chronicle article from November 22, 1992, Dr. Cooper stated Malcolm X used to call him “Big Coop” and he called Malcolm X “Big Red.” [8] Although Dr. Cooper was not a Muslim himself, he believed Malcolm X respected him because of his involvement with the NAACP. According to Mitchell, Malcolm X frequently came to her house for question and answer sessions that revealed predictions about the future of the black community. On February 4, 2017, Mitchell was awarded the Frederick Douglass medal for her accomplishments in the city of Rochester at the Susan B. Anthony Center’s Legacy Award Ceremony, where I had the honor of meeting her.

For more information on collections that are relevant to Black History Month, contact Miranda Mims, the Joseph N. Lambert and Harold B. Schleifer Director of Rare Books, Special Collections, and Preservation, at mmims@library.rochester.edu. Enjoy reading about the University of Rochester Libraries? Subscribe to Tower Talk.