Checking In with Lindsay Cronk

We catch up with the ‘radical’ assistant dean working to better the library profession in a new interview series. 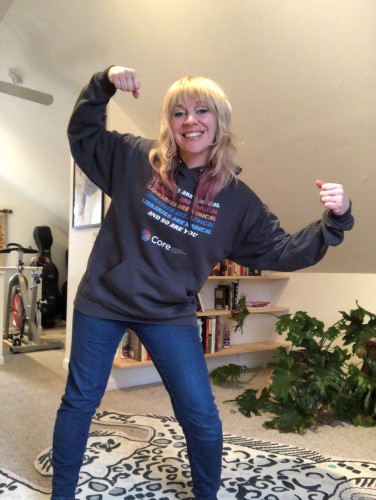 To find Lindsay Cronk, assistant dean of Scholarly Resources and Curation for the River Campus Libraries, enter Rush Rhees Library from the Eastman Quad and continue through the Roger B. Friedlander Lobby. Take the stairs to your right (or left), and go into the Great Hall. Head for the doorway on your left, go right and turn left before you reach the Department of Rare Books, Special Collections, and Preservation. She’ll be at the end of that hallway, on the left.

The directions to Cronk’s office are not just so you know how to find her. (But know that if you do seek her out and she is not in the middle of something, she will happily offer you a seat.) It’s to emphasize the behind-the-scenes nature of her work. And much like her physical location, the work she does isn’t easily perceived, nor are the results.

Cronk leads a diversely skilled team that connects the University of Rochester’s collections with its communities. She and her team work together to ensure students and researchers have the resources they need to learn and create new knowledge. Cronk, personally, is responsible for developing strategies and tactics for the materials budget and investments, building coalitions across the research library peer group, and overseeing high-value vendor negotiations and renewals. But this isn’t why we’re checking in with her.

There’s another aspect of Cronk’s librarianship that is also “hidden.” This past July, she became president of Core: Leadership, Infrastructure, Futures, a division of the American Libraries Association (ALA), after serving about six months as president-elect.

As president, Cronk has been serving under the slogan “Libraries are radical. And so are you.” (If you like that, you might like it even more on a t-shirt.) It’s shorthand for her belief that libraries and the professionals who keep them running should be proud and vocal about their work and libraries’ intrinsic value. Another fundamental principle of her presidency is leadership in advancing diversity, equity, and inclusion, areas in which she sees Core being able to leverage its collective heft to remove barriers to participation and pursue social justice.

Cronk’s term will end on June 30, 2022, when she will then begin a year of serving as “past president.” We’re checking in to see how she will spend the second half of her presidency.

Tower Talk: In government politics, there are often references to “campaign promises.” Did you make any of those that you’re currently working to make good on?

Lindsay Cronk: I had three campaign promises. The first two do things that are genuinely useful to marginalized members. I established the Core Action Fund, which we've been continually fundraising around. And that's basically to provide free memberships mostly for people of color.

The second is an award for excellence in ongoing work. The library profession puts a huge amount of emphasis on people doing new things and doesn't necessarily always do a great job of celebrating the work of what keeps things running—basically a counterpart to the ALA’s “Movers and Shakers.” So, we're going to have our first list of “Maintainers” coming out at ALA Annual, which is in June. I was hoping we could use American Libraries and create a big, splashy issue, but the idea isn’t as far along as I hoped it would be.

The third promise was to talk forthrightly about the state of ALA. Every week, I send out a report to everyone in Core. I call it my “Happy Friday.” I just write a note about everything that I've done all week, everything that's going on, and what the state of the division is to model that transparency. I also established a monthly orientation program because it can be very challenging for new members to figure out what they want to do.

TT: OK, so what are your priorities heading into 2022? What are you trying to get done?

Cronk: My motto or slogan for my year in office has been “Libraries are radical. And so are you.” It’s all about realizing the radical potential of a profession that is thoroughly focused on just making things accessible for free and doing knowledge justice. So, I’m working to secure someone to speak to that concept at the President’s Program for ALA Annual. Last year, the speaker was author Kaetrena Davis Kendrick who cohosts the podcast #FixMyLibrary. We are also on the verge of launching a major partnership with OCLC that will provide every Core member with access to their integrated library system.

TT: What’s been most satisfying about the work you’ve been doing?

Cronk: Moving the need on libraries’ potential to be “radical.” It’s been really, really fun to sort of push the envelope in that direction. And it's been wild. I’m often thinking to myself, “I can't believe they gave me this platform.” Members and folks in the profession want change; they don't want things to look the way that they always have. They don't want the professional association that existed 10 years ago. They want something better and more mission-driven. And so that's been the single thing that has driven me through all of this.

It’s also been this really wonderful learning experience. Core members constitute such a broad swath of the profession; I've learned a lot from them. And I've learned a lot about what I think needs to change for us to stay relevant for libraries to push to their radical potential. There's always a tendency for us to rest on our laurels. Lately, we have had a lot of public trust. We have a lot of really positive public opinion, but some of that is based on a misunderstanding of what we do. So a lot of what I try to do is just speak as plainly as possible about what's necessary, what's valuable, and how library workers actually make the library work. It is not just a beautiful box full of books.

TT: What happens after June? What’s next for you?

Cronk: I will be past president, and I will still have responsibilities for the organizations. And I'm thrilled about that. After that, I'm thinking about how I can take what I've learned at that level and continue onwards. I would like to maybe run for ALA president in a couple of years, depending on the agenda that I see come forward—and my appetite for it.

I’m also trying to get more involved in SPARC [the Scholarly Publishing and Academic Resources Coalition]. They have a very strong knowledge-justice agenda. And I see that as the center of Core’s importance. Fundamentally, if you broke what it really means to do library work to its most basic block, it's about making knowledge as accessible to as many people as possible to continue to spur human creativity. To make new knowledge. That’s the whole thing. SPARC is engaged in some of those meaty conversations around how we actually do this.

And I want Core to continue. My base-level metric is making it through this start-up phase, continuing as a division, and being successful and sustainable. Its success or failure will speak to the health of the profession. And that’s something I think about a lot. It gives me stress and joy, but it’s the truth. If we can’t make it, what does that say? ∎

For more on ALA Core or Lindsay Cronk’s work, ask her yourself. Contact her at lcronk@library.rochester.edu.