Some heroes fight crime; this one fights AIDS—and arthritis. 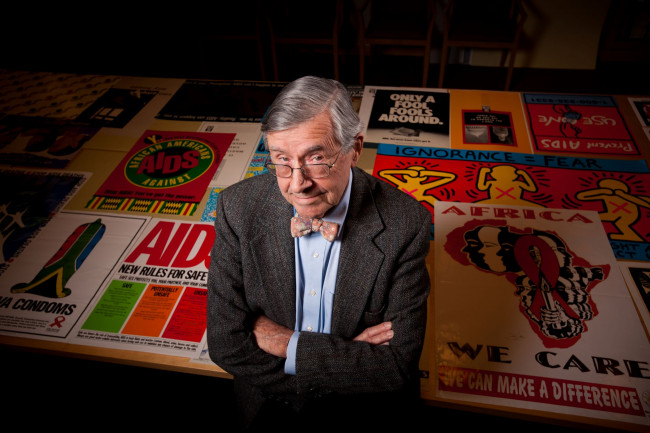 Even if you’re not into comic books and your attention has escaped the gravitational pull of the Marvel Cinematic Universe, you’re probably familiar with at least one superhero origin story.

Peter Parker became Spider-Man when a radioactive spider bit him.

Bruce Wayne dedicated his life and monster inheritance to fighting and avenging crime as Batman after being orphaned by an armed mugger.

Steve Rogers received a super-soldier serum as part of an experimental US Army program that turned him into Captain America.

But not all heroes wear capes—nor are they all created through science or forged by childhood trauma. Some are regular people who are transformed by regular things, like a poster.

Near the peak of the AIDS crisis, Edward C. Atwater ʼ50 (1926–2019), a professor emeritus of medicine at the University of Rochester Medical Center, was riding in a subway car on Boston’s red line when he was taken captive by two words on an orange poster: “Use one.” The phrase was accompanied by two disembodied hands working together to remove a condom from its wrapper. Thirty-five years earlier, this would have been the height of taboo. But in the early ʼ90s, it was a desperate dose of medicine. Atwater was fascinated.

Atwater’s subway experience began his transformation into the world’s foremost collector of HIV/AIDS education posters. Almost three decades of gathering produced the AIDS Education Posters Collection, which is more than 8,000 posters strong. He gifted his collection to the University of Rochester, where it resides under the stewardship of the Department of Rare Books, Special Collections, and Preservation (RBSCP).

Welcome to the LCU—the Libraries Collection Universe. We don’t have LCU feature-length films (or even short films, for that matter) or comic books. But for Edward Atwater, or as he’s known in the LCU, “The Collector,” we now have Up Against the Wall: Art, Activism, and the AIDS Poster.

While the book (available for pre-order now or at the store at MAG next month) focuses on the posters, it also gives extensive background on the collection and The Collector. For example, we get further insight into Atwater’s origin story in a quote where he explains why the poster was so affecting.

“I was in medical school 35 years earlier,” recalls Atwater, “it was illegal to teach anything about contraception. The one lecture we had, I recall vividly; they made a lot of hoop-dee-doo. We closed the doors and acted as if the police were about to raid the place. In those days, that was illegal and forbidden, and so I thought that poster was really striking.”

After seeing the “Use one” poster, Atwater called the Massachusetts Department of Public Health (the poster’s creator) and asked to have some copies. And so began a voracious collecting quest.

In Up Against the Wall’s chapter “The Collection,” Jessica Lacher-Feldman, exhibitions and special projects manager for RBSCP and curator of record of the AIDS Education Posters Collection, takes the audience beyond Atwater’s origin story. We’re staunchly anti-spoiler, so we don’t want to share too much from this section. But we will share some snippets to help offer some background that paints a clearer picture of the man who assembled this staggering collection of posters—and ultimately inspired the collaborative Memorial Art Gallery exhibition that will open on March 6, 2022.

“A rheumatologist by training…”

But a historian by nature. He indulged this spirit by studying history at the University of Rochester, Class of 1950 (after coming home from Europe, where he served in the US Army’s 101st Infantry Regiment of the 26th Division during World War II). Although he then ventured into the world of medicine, earning his MD at Harvard Medical School in 1955 and, that same year, returning to Rochester for an internship and residency at Strong Memorial Hospital, he found his way back to history.

A fellowship took him to Johns Hopkins University, where he earned a master’s degree in the history of medicine (1974). This new degree led to Atwater becoming the first-ever associate professor of history of medicine at the University of Rochester School of Medicine and Dentistry. Throughout the ʼ70s, Atwater assembled a large personal collection that included books, journals, and ephemera to support his historical research.

“His enthusiasm for building the collection was evident…”

In the collection’s sheer size and scope. As a collector, Atwater was an archivist’s dream. In addition to amassing a collection that holds more than 8,000 posters that represent 130 countries and 76 languages, he collected HIV/AIDS-related ephemera, including branded condoms, fliers, booklets, postcards, and clothing, such as novelty socks with condom pockets. One does not achieve this through casual material gathering. This collection is a feat of passion.

“Dr. Atwater was a born collector,” writes Lacher-Feldman, adding that he “included meticulous documentation and correspondence that shed light on how he tirelessly sought HIV/AIDS materials from across the globe.”

If there’s any question about how passionate he was about this endeavor, it should be known that he was still adding to his collection weeks before his death, at age 93.

And he did. While his efforts were rooted in his interest in the history of medicine, his perspective on the posters’ collective value took a broader view. In a 2011 PBS News Hour article, Atwater said he “realized that [the posters] were far more interesting as social history.” He clarified by highlighting how the posters illustrate the ways different cultures approached a “touchy subject” shows an evolution of our understanding of the disease—from thinking people could catch it in a public pool to encouraging contraception.

Atwater noted that he hoped to show people how various societies around the world were responding to HIV/AIDS. “Looked at chronologically,” he said, “the AIDS posters show how social, religious, civic, and public health agencies tailored their message to different groups.”

Although he is no longer with us, the collection, guided by his vision, is still growing. And it’s continually used by researchers and classrooms, including those studying art history, graphic design, medical humanities, foreign languages, anthropology, public health, and other disciplines.

When Atwater gave his collection to Rochester in 2007, he requested that the collection not take his name. So, we have a man who nobly and relentlessly sought to draw further attention to a pervasive and deadly adversary for the benefit of all humankind, from the shadows of his humility. That is the stuff of a hero. ∎

For Edward Atwater’s complete biography, visit the Edward G. Miner Library archive. If you would like to learn more about the book, Up Against the Wall, or the AIDS Education Posters Collection, contact Jessica Lacher-Feldman, exhibitions and special projects manager for RBSCP, at jlf@rochester.edu. For more information on the upcoming exhibition at the Memorial Art Gallery, please visit mag.rochester.edu/exhibitions/up-against-the-wall/.