A 700-year-old manuscript is the first in a new University libraries collection that honors historian Richard Kaueper. 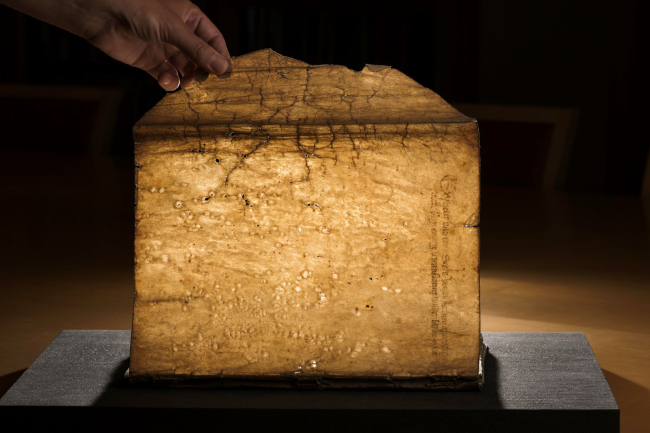 What do you get the preeminent medievalist who has everything? A nice tome? A small medieval charter? The question was plaguing the University of Rochester’s Laura Smoller, a professor of history, and Anna Siebach-Larsen, the director of the Rossell Hope Robbins Library and Koller-Collins Center for English Studies.

Last June, Smoller and Siebach-Larsen were looking for a way to celebrate Richard Kaueper, a beloved and accomplished history professor heading into retirement after 52 years.

Kaueper, now the Franklin W. and Gladys I. Clark Professor Emeritus of History, is a fellow of the Royal Historical Society and Medieval Academy of America. He was also awarded the Verbruggen Prize by the De Re Militari Society and earned research grants from the Harry Frank Guggenheim Foundation, American Philosophical Society, National Endowment for the Humanities, and Woodrow Wilson Foundation. In the classroom, his graduate students are so committed to him, they proudly refer to themselves as “Kaueperites.” The dedication that earned this loyal following also earned several teaching awards from the University, including the Goergen Award (2013), the Student Association Award for Teaching Excellence in the Social Sciences (1999), and the Edward Peck Curtis Teaching Award (1990).

So, properly honoring Kaueper was no small task. Fortunately, a groundswell of support from former students allowed the gift-seekers to go big.

After scouring auction catalogues and many conversation with dealers, Siebach-Larsen found a 14th-century Parisian manuscript that fit the bill: Ordonnances de plaidoyer de bouche et par escript (Ordonnances governing legal pleas made orally and in writing). “Essentially, it’s a lawyer’s handbook,” she says. “We purchased it in honor of Dick because he’s a monumental historian of legal history, particularly for France and for England in the high and late Middle Ages. It really speaks perfectly to both his teaching and to his own research.”

GET THE FULL STORY: “Wormholes and stains add to backstory of medieval manuscript’s acquisition”

For more information about the manuscript contact Anna Siebach-Larsen, at annasiebachlarsen@rochester.edu. If you’re interested in honoring another Rochester faculty member in this way, contact, Pamela Jackson, senior director of Advancement for the River Campus Libraries, at pamela.jackson@rochester.edu.