'Domestic violence is a national crime'

October is Domestic Violence Awareness Month. Slaughter was one of its champions 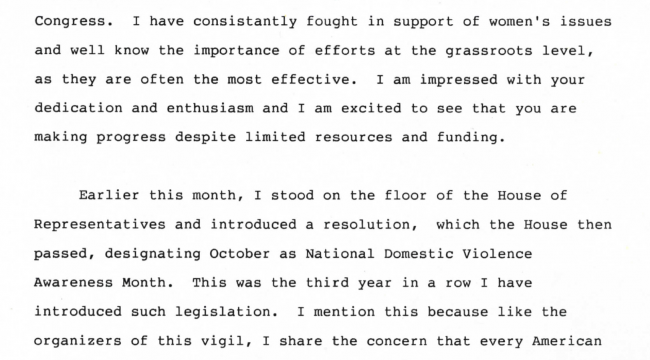 Congresswoman Slaughter used her position and platform to bring awareness to domestic violence and demand Congress take measures that would affect critical social change. For four consecutive years, she went before the House of Representatives to declare October Domestic Violence Awareness Month.

In 1988, she and Congressman George Miller wrote a “Dear Colleague-letter” regarding their resolution (H. J. Res 619) that said, “[d]omestic violence is a national crime and tragedy. Victims suffer physically, emotionally and financially.”

In, 1989, on the House floor she said, “Mr. Speaker, . . . we can raise awareness of a problem that is the single largest cause of injury to women in the United States. . . . Many of these women feel trapped in their own homes and are afraid to seek help out of fear they will suffer even more abuse.”

In 1990, she insisted, “Mr. Speaker, we must recognize the victims who have persevered and overcome this daily violence. We also need to commend the hard work and invaluable achievements that have been made through programs to combat domestic violence”

Finally, in 1991, she addressed then-Speaker of the House Tom Foley saying, “ I am proud to have introduced this resolution, but I am also saddened that such action is still necessary. The heartbreaking reality is that nearly four million Americans—mostly women and children—will be injured and well over 2,000 of them will die as a result of domestic violence.”

The first observance of a domestic violence awareness month started in 1987 as the Day of Unity (which eventually turned into a whole week), as a result of six years of advocacy and work from the National Coalition Against Domestic Violence (NCADV) started in 1981. At that time, it served as way “to connect advocates across the nation who were working to end violence against women and their children.” Here, strategies for spotlighting the manifold issues of domestic violence took on many forms in communities large and small. This grassroots approach brought these issues to the attention of politicians where they could properly argue for increased funding necessary to support the organizations and shelters responding to families, to extend prison sentences to protect victims from their abusers, and, most notably, to increase awareness of the issue for continued vigilance and support of those suffering in silence.

As domestic violence was one of the first legislative issues that Congresswoman Slaughter and her staff pursued, the collection features a number of documents and research materials used to explore, research, and write about domestic violence for the development various speeches and remarks, and the development of House bills, amendments, and resolutions. Beyond the reading of the documents a researcher might come to see how the times in which this work was conducted dismissed domestic violence largely as a household issue and not one that the country should be dealing with at the federal government level. This explains why in 1986, 30 percent of female homicide victims were killed by their husbands or boyfriends. In that same year, the NCADV reported that more than 300,000 women and their children were forced to seek help in emergency shelters.

Slaughter’s staff frantically researched why battering seemed to escalate in severity over time. By 1989, upwards of three to four million women were victims of domestic violence. Slaughter felt legislative action was vital.

The archives highlights Slaughter’s tenacity, showing the many ways she reached out to colleagues in both the Republican and Democratic parties and community organizations to share the depths of the problem. She and her office researched the issues from several angles and had shown how domestic violence was linked to other forms of violence and debilitating crises like the economy, education, and health.

Slaughter either sponsored or co-sponsored many pieces of legislation to redress the many possible causes of domestic violence. Here are 20 that were brought to a vote:

In a speech Slaughter gave in1989, she said, “[a] woman is battered every 15 seconds in America.” A lot of research and advocacy went toward multiple attempts at eliminating that statistic and improving the lives of Americans forced to endure such violence. Although there were many successes, legislatively, recorded by politicians like Slaughter, the statistics on victims of domestic violence remained steady, even to present day.

According to the NCADV, “more than 10 million adults experience violence annually” as a result of violence from an intimate partner. The coalition also notes that:

“Physical violence is often accompanied by emotionally abusive and controlling behavior as part of a much larger, systematic pattern of dominance and control. Domestic violence can result in physical injury, psychological trauma, and even death. The devastating consequences of domestic violence can cross generations and last a lifetime.”

Consequently, we must continue shedding light on this issue and give recognition to those who contribute to decreasing the incidence of domestic violence and support the rights of victims to live a life free of those abuses.