A virtual quest to better understand the use of medieval motifs in video games. 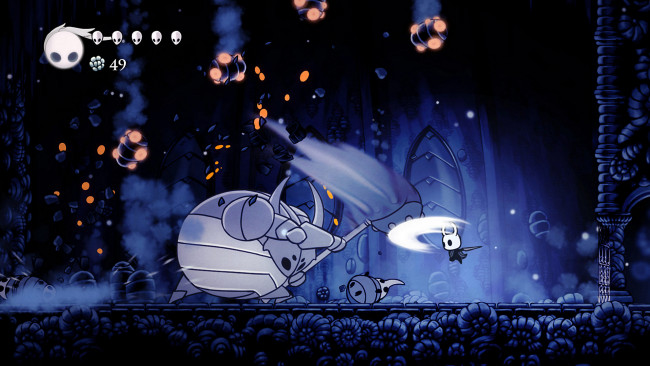 Not all knights wear armor—some wear overalls. And some carry a plunger instead of a sword. And some are also named Mario.

That’s right. The mustachioed Italian plumber known as Super Mario is a knight. To Anna Siebach-Larsen, director of the Rossell Hope Robbins Library and Koller-Collins Center for English Studies, it’s as clear as the waters in World 2-2 of Super Mario Bros.

“He’s on a quest,” says Siebach-Larsen. “There’s a princess. There are monsters. There are castles. You have characters with unknown parentage. It has all the fundamental elements of basically any medieval romance.”

Siebach-Larsen is honoring Mario’s knightliness by including Super Smash Brothers in the November 8 event Joust to Assassin’s Creed: Medieval Themes in Video Games.

The gaming and discussion session is a collaboration with the Art/Music Library, which holds more the 400 games. Librarian Stephanie Frontz began building the collection in 2014, when Mike Jarvis, associate professor of history, decided to use a selection of pirate-themed games as part of a class assignment. The collection continues to grow as new games are needed for teaching or research.

While there will be plenty of game-playing, there will also be a lot of idea-sharing. Siebach-Larsen notes the conversation around the games will highlight how they reflect our culture and shape our understanding of the Middle Ages. Part of this conversation will occur through “lightning talks,” given by undergraduates, graduate students, and faculty members.

For example, Orisa Santiago Morrice, a PhD candidate in English, will be talking about the relationship between Western European medieval imagery and the Shinto/Buddhist themes found in the Dark Souls series. Separately, Emily Lowman, another PhD candidate in English, plans to discuss popular franchises like Final Fantasy, Super Mario, and Zelda. She will explore the use of medieval narratives in all iterations of the games, but as the franchises progress, their aesthetics shift from medieval to science fiction.

Speaking of the games…

Here’s a brief review of one of the event’s titular games, based on 30 minutes of agonizing gameplay:

How do you handle frustration? This is an important thing to know about yourself before playing this game. There’s a reason this game holds one of the three keys needed to complete the quest in Ready Player One—it’s incredibly difficult to be successful. The seemingly simple objective can quickly become a maddening experience in which you feel there’s a conspiracy against you. This is one of the defining characteristics of classic arcade games. While you’re sobbing, cursing Williams Electronics, insisting this isn’t fair, you’re also starting your next game.

Play this game if:

You can play it for free and have a high pain tolerance.

Game tip: Do not play this game. For the sake of your sanity and enjoyment, try Hollow Knight or Shovel Knight, instead. Both are challenging, but in a smile-instead-of-cry kind of way; have engaging narratives; and, this almost goes without saying, have far superior visuals.

Or if you’re just really into jousting, maybe watch the movie A Knight’s Tale, which you can check out from the Art/Music Library.

For questions about access to the Art/Music Library’s video game collection, contact Stephanie Frontz. For more on the medieval motif and how the Robbins Library can help you explore it, contact Anna Siebach-Larsen.