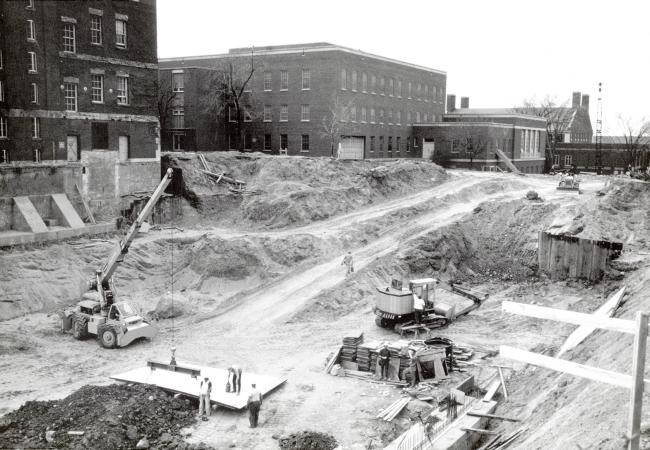 It’s hard to imagine what it must have been like to see Rush Rhees Library come to life during the late 1920s. At what point did the building start to induce goosebumps? Was it early on, when the steelwork started to give the building its shape, or was it later, when one could take in the entirety of the iconic façade?

But the new library had more than looks. When it was formally dedicated in 1930, one of the aspects of the building that was being celebrated was that it had space for a million volumes. However, by the early 1960s, space for the collection and staff were at a premium. In 1964, the University initiated plans for a $6.5 million addition and renovation, and in February 1967—when the library’s total volumes eclipsed one million—they broke ground. In a special dedication issue of the University of Rochester Library Bulletin, Catherine Hayes writes that the two-and-a-half-year build included “such routine hazards as dirt, noise, relocations, fires, floods, excessive heat, and chilling cold.”

Having survived the great perils of construction, the University community welcomed a literal addition to its River Campus with ceremonies on April 23 and 24, 1970.

“Having the opportunity to ‘wander’ within Rush Rhees Library through the ages has been a tonic for my spirits,” said Mary Ann Mavrinac, provost and the Andrew H. and Janet Dayton Neilly Dean of the University Libraries. “The exhibition demonstrates how a library is a living entity that changes to meet the needs of its users.”

The exhibition gives viewers insight into the planning and construction of not only the library addition but also all River Campus. It also offers a glimpse into the dedication ceremonies and plenty of photos that show how Rush Rhees’s space has changed over time. And it’s still evolving.

Although the coronavirus has complicated progress, the Gleason Library Refresh Project will rejuvenate the 13-year-old space. Additionally and concurrently, Carlson Science and Engineering is gaining Studio X, a hub for experiencing, exploring, and experimenting with extended reality.

Even during a pandemic, the River Campus Libraries’ wheels of progress keep turning. As John G. Lorenz, deputy librarian for the Library of Congress, noted in his remarks on April 23, 1970, “In library service, there is never time to sit back and say the job is done.”

This exhibit is one of several of the Department of Rare Books, Special Collections, and Preservation’s online exhibitions. For questions or more information about Evolutions in Space, contact Melissa Mead.