Have you met Alma?

The University of Rochester Libraries welcomes a new library system. 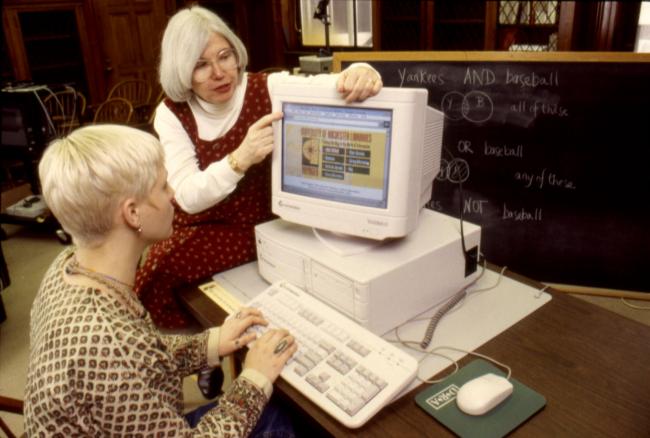 When the University of Rochester Libraries celebrated the arrival of its newest team member on July 30, there were no balloons or cake. There wasn’t even a card.

(There may have been joyful tears, shed behind closed office doors.)

In practice, Alma is the behind-the-scenes software that allows staff—across the University—to manage physical collections, as well as digital subscriptions and licenses. The system patrons interact with is known as Summon, the window enabling the discovery of materials.

Rochester began using Voyager in 1994. At that time, it was the library system to have, and Rochester was among the early adopters. But it was also using a 30-year-old cataloging language developed for physical materials, held on-site. As the Digital Age progressed, Voyager became a hindrance.

Libraries staff members were forced to improvise and come up with workarounds when working with digital materials.

“It’s a totally different workflow,” says Jennifer Bowen, associate dean for scholarly resource management for Rochester’s River Campus Libraries. “You’re not physically receiving an item, stamping it, or labeling. Instead, you’re making sure links lead to the right materials, and then you’re making sure patrons have access.”

Alma was designed for the digital workflow while also allowing librarians to manage and provide access to a range of local and shared (think interlibrary loan) materials.

In essence, Alma is the new Voyager.

Adam Traub, senior director of digital strategies, explains that systems like Alma are especially good at working with digital materials. The reason: they know what people are trying to find.

Alma is, by far, the most popular system used by large academic libraries in the U.S. This includes 62 members of the Association of Research Libraries. Here’s a handful of universities in that list:

Institutions are choosing Alma because none of the other system vendors have a platform as mature.

Alma represents the fourth significant step forward in the evolution of Rochester’s library system. The first was the establishment of a handwritten card catalog in 1870. The next jump wouldn’t happen for another 115 years.

The University began using GEAC (pronounced gee-ack), both the name of the system and its Canadian vendor, in 1985. (Although some might remember GEAC by its nickname, Chester.) GEAC used closed-system terminals that exclusively communicated with Ohio College Library Consortium, a giant database of bibliographic records.

“Those early monitors had the curved screen with monochromatic green displays,” says Walter Nickeson, a cataloger for Rare Books and Special Collections. “And they were text-based. Ergonomically it was not very helpful.”

It was also slow. GEAC required a lot of overnight processing, which meant librarians couldn’t see the results of their work until the next day.

“Looking back, I don’t know how we got any work done,” says Nickeson.

Around the late 1980s–early 1990s the River Campus Libraries started using PCs, paving the way for the integration of Voyager in 1997. In terms of functionality, this was a gigantic leap forward. However, no one was calling for champagne.

Sharon Briggs, head of the acquisitions department for River Campus Libraries, notes that no one in the department had been working with computers. “We had to learn Windows,” says Briggs. “That was the biggest challenge, and it seemed like it was happening very fast.”

Briggs’s colleague Lydia Auteritano, who works in monograph acquisitions, agreed. “Going from paper to a computer was such a change,” says Auteritano. “It wasn’t just the card catalog. It was also all our order files.”

One of the biggest challenges Voyager faced was the staff members’ reluctance to let go of their paper records. Although Alma doesn’t present as dramatic of a shift, it too will require some acclimating—and more.

“We were on Voyager for 23 years,” Traub says. “There are some people who were here before then and who have an incredible grasp on how to get things done in that system. It will take some time for us to regain that mastery.”