In her voice: Violence Against Women Act

A brief, personal recollection of a hard fought battle for legislation to protect women 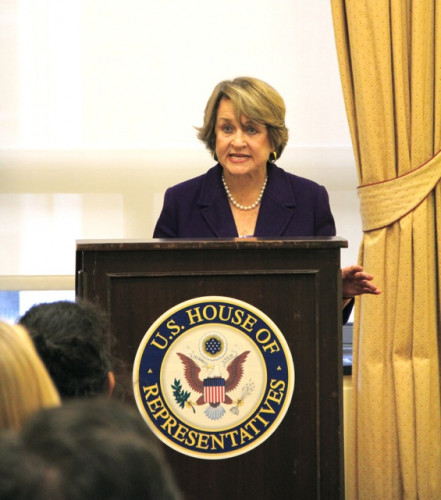 In the 1990s, the Violence Against Women Act (VAWA) brought on much discussion and debate in Congress regarding. It was an expansive discourse, and it sought to compose many provisions aimed at a more multifaceted approach toward protecting women, during what seemed to be an increasingly hostile time for women in American society. Provision being discussed included concerns for safe streets, campuses, and homes (including for immigrant women); equal justice in the courts; training for police and other law officials; rape and domestic violence education, and many other divergent issues and concerns. The conversations and organizing during this period are well documented in Congresswoman Slaughter’s papers as the bill’s coauthor.

More than 30 years later, Congress is once again gathering to continue the work Slaughter and others started. In honor of this work, we'd like to share a transcript of Slaughter's recollection of the history of the VAWA's passage.

Slaughter on the Violence Against Women Act

The battered women’s movement first started in 1970s, almost 20 years ago. It was women in local communities who first realized that abused spouses needed somewhere to go and someone to help them, and determined to fill that need. Many of us in this room will remember what it was like in our towns and neighborhoods before our nation really became aware of violence against women as an issue. Too many of us knew women whose husbands or boyfriends hit them. But no one ever dared talk about it – it was a family issue, none of our business. Those women had little alternative but to stay with a batterer. Especially in the days before opportunities for women were expanded, wives were totally dependent on their husbands for food, clothing, and a roof over their heads. If they had children, a mother could hardly be expected to abandon her children with an abusive father.

I think that, back then, everyone in the movement felt like they were the only ones in the world working on this issue. Shelters could not get money from the government or the United Way or big foundations because they were just too controversial. Everyone existed hand-to-mouth, surviving from one fundraiser to the next. But we pulled together and had our bake sales and rummage sales. Sometimes the unions would donate labor, or a local business would send some supplies.

A few of us tried to tell America that we still had a problem. After I was elected to Congress, I offered annual resolutions to declare October as Domestic Violence Awareness Month. I introduced those resolution every year from 1988 until 1994. Once or twice, they even passed. But in the meantime, it was the local chapters and shelters and crisis centers that kept the faith. You all kept providing sanctuary to women and children with nowhere else to turn. And in fact, your efforts grew – the battered women’s movement spread to almost every community in America.

In late 1994, Congress took the first meaningful steps to address violence against women by passing the Violence Against Women Act, VAWA. But getting this bill passed was not easy. I am grateful to my colleague, Senator Joe Biden, for having the courage to take this issue on with the rest of us. In 1990, Sen. Biden and I began drafting the Violence Against Women Act along with a group of my colleagues in the House like then-Reps. Barbara Boxer and Pat Schroeder. We introduced our legislation in June 1990. . . . After years of being small, isolated efforts, all the battered women’s organizations and shelters came together to push for the passage of VAWA. Local, regional, and national coalitions formed. Conferences were held; activists met with their Members of Congress at home and in Washington. By the end of 1992, VAWA had 56 cosponsors in the Senate and 211 in the House – half of each chamber.

Although VAWA was introduced in 1990 and Sen. Biden held hearings on it, the bill was not taken up by Congress for two more years. I was fortunate enough to count House Judiciary Committee Chairman Jack Brooks as a friend and fellow [Southerner]. I employed all my powers of persuasion to convince him that it was vital that his committee take up VAWA. Finally, VAWA came to a vote in the House and the Senate. Both passed it in 1993, and it went on to a conference committee for final revisions. Then we got bogged down again. VAWA got rolled into the Crime Bill, an enormous and controversial piece of legislation. The Crime Bill held us up for another year while Congress debated provisions like cops on the beat and midnight basketball. But at last, we passed the Crime Bill and VAWA in September 1994, and President Clinton signed it into law. ∎