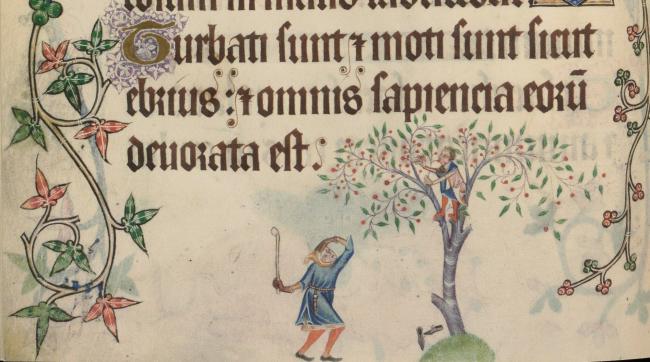 It was the best of times.

It was the worst of times.

For every person who remembers a first job, car, school dance, or love with fondness, there’s someone for whom these are sources of pain and embarrassment.

A new Rossell Hope Robbins Library exhibit curated by Ada Wightman ʼ21 illustrates that the highs and lows that come with being a teenager are a rite of passage that is at least 500 years old. Smells Like Teen Spirit: The Adolescent Experience in the Late Middle Ages looks at how medieval boys and girls navigated this period of crazy hormones and crazier social expectations.

Wightman joined the Robbins Library in August 2019. She is the first to hold a recently created office assistant position, and she is currently the only underclassman on the staff. When she set out to create the exhibit, she was surprised to discover a dearth of research.

“Robbins has more than 30,000 books in its collection,” says Wightman. “I figured my research would be drawing from a wealth of information, but I ended up relying on just a few books.”

A portion of the exhibit’s title refers to alt-rock band Nirvana’s unofficial teen anthem “Smells Like Teen Spirit.” It’s an apt choice, as much of Wightman’s exhibit aligns with the song’s lyrics.

“Load up on guns, bring your friends”

There’s a saying from the Book of Proverbs: “idle hands are the devil’s workshop.” Teens were likely the church’s favorite example of this. In their spare time, young apprentices and servants who were sick of “Nine Man Morris” (tic-tac-toe) roamed the streets in “loosely structured gangs.” Vandalism became a popular pastime, as did shooting arrows at birds, which got so bad in London it was banned in 1327.

“I feel stupid and contagious”

To this, English rock band Pink Floyd might off the retort, “We don’t need no education.” In most cases, this was true; it also wasn’t really a choice for the lower and middle classes. Teens were mostly apprenticing or working at home with their parents. Most of the educating that did take place occurred in convents and monasteries. If it was an actual school, it was located in a city. Those in rural, agricultural areas and, to a greater extent, girls were out of luck.

Teens were likelier to get dysentery, malaria, diphtheria, flu, typhoid, smallpox, or leprosy than an education.

“A mosquito, my libido”

Surprise, surprise: sex was a teen issue in the Middle Ages too. Moralists referred to the “problem” as “lust-longing.” For the teens who spent their adolescence apprenticing, the moral finger-wagging came not from parents, but their masters, as well as contracts that said no to every basic teen instinct: fornication, drinking, gaming, going to theaters, and gossip. No gossip! Imagine trying to enforce that.

[Teen apprentice whispering to a friend]

Master: You best be speaking truth into that ear!

Marriage was also a no-no, but it was also the least likely to be an issue. Masters spent more time policing their male apprentices' prostitute habits than their betrothal attempts. ∎

Ada Wightman is majoring in international relations and history with a concentration in East Asian history. If you have questions about the Smells Like Teen Spirit exhibit, contact Ada at awightm2@u.rochester.edu. For general questions about the Rossell Hope Robbins Library and its collection, contact Anna Siebach-Larsen. Enjoy reading about the University of Rochester Libraries? Subscribe to Tower Talk.