Robbins Library has a new digital exhibit that highlights female adaptations of the Lady of Shalott. 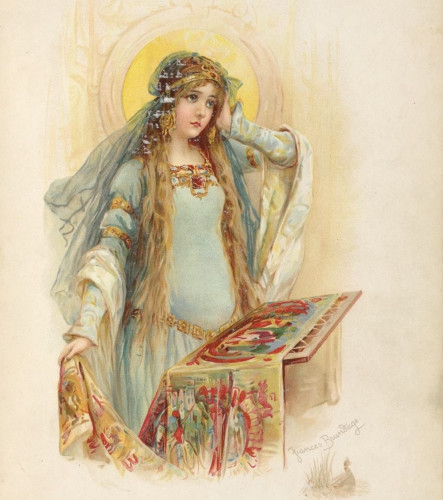 Edgar Allen Poe’s essay “The Philosophy of Composition” gives a Song Exploder-like explanation of how he created “The Raven.” It’s so detailed that he even recounts conversations he had with himself.

Edgar Allen Question: What is the most melancholy of melancholy topics?

EAQ: OK, smart guy: When is death most poetic?

EAA: [Rolls eyes] The death of a beautiful woman is obviously the most poetic topic ever conceived by man.

(We have taken some liberties with the exchange. You can read Poe’s thoughts verbatim here.)

Poe’s perspective on death, beauty, and poetry serves as the foundation of Reclaiming the Death of a Beautiful Woman: Female Voices Adapting the Lady of Shalott, a new digital exhibit at the University of Rochester’s Rossell Hope Robbins Library. The exhibit’s curator and Helen Ann Mins Robbins Dissertation Fellow Margaret Sheble challenges the idea—which predated and has long-survived Poe—that a woman’s death is beautiful, passive, and even romantic through the work of women artists and authors.

Sheble examines illustrations and adaptations of Alfred Lord Tennyson’s poem “The Lady of Shalott” and the medieval character Elaine of Astolat. Elaine is a medieval maiden who falls in love with Sir Lancelot, is rejected by him, and then dies of a broken heart. Tennyson’s “Lady” has a no-less tragic story. She is confined to a tower by a mortal curse that only allows her to experience the outside world through a mirror. When the sight of Sir Lancelot drives her from the mirror to a window, the curse goes into effect. Knowing her fate, she gets into a boat that will float her lifeless body to Camelot.

The exhibit showcases pieces from the Robbins Library, as well as Rare Books, Special Collections, and Preservation and the personal collection of Barbara and Alan Lupack, that highlight Elaine and Lancelot. (Alan is an internationally known Arthuriana scholar and emeritus director of Robbins Library.) Beyond the wide array of pieces, the exhibit also offers videos that provide more context and further analysis on select themes.

There are also supplementary events scheduled over the next three months. In May, Jacob Lewis, a visiting assistant professor in art history at the University of Rochester, will discuss British photographer Julia Margaret Cameron, one of the most notable portraitists of the 19th century. The following month, Ann Howey, associate professor of English language and literature at Brock University, will discuss her book Afterlives of the Lady of Shalott and Elaine of Astolat. And in July, Monroe County Library will host a hands-on program based on the graphic novel Avalon High.

To help you explore the exhibit, we’ve created a brief primer on each thematic section.

Victorian medievalism was the jelly to British mourning practice’s peanut butter. Due to poor working conditions, disease, and war, death was like an old pair of shoes to British people in the Victorian era. And when Queen Victoria’s mourning of Prince Albert’s death went from weeks to months to years, and then decades (totaling four), death took on a style. Death aside, Victoria’s reign was not a particularly happy time for the British people, who found their escape in medieval literature.

In “Victorian Medievalism & A New Culture of Mourning,” you will gain a better understanding of the ingredients for this medieval-death sandwich.

Arthurian material made a comeback in the 19th century. Many artists working with the medieval subject matter took inspiration from prominent poet laureate Alfred Lord Tennyson. Part of this may be because Tennyson’s Idylls of the King was the first time in almost four centuries that an English writer wrote a book-length piece on Arthurian legend. One of Tennyson’s most famous character’s in his Arthurian work was the Lady of Shalott, who inspired hundreds of depictions across mediums.

In “Alfred, Lord Tennyson’s Legacy & The Lady of Shalott,” you will be introduced to the Pre-Raphaelite Brotherhood and see how it shaped the ways Tennyson’s work was visualized and remembered.

Until the 19th century, British women were expected to live within the domestic sphere, like their queen, who modeled her femininity around motherhood and decency. Mary Wollstonecraft’s A Vindication of the Rights of Women (1792) helped make history of a glut of his-stories on non-domestic topics. Women began publishing and engaging in popular themes, such as medieval literature and characters like the Lady of Shalott.

In “Nineteenth-Century Women Artists, Medievalism, & Their Legacy,” you will dive into a gender-norm rebellion and the rise of the New Woman movement.

“The Lady of Shalott” is the story of a woman held hostage, unable to live the life she desperately wants. But is it? Could it instead be a story about a woman so bold and confident in her desires (for Lancelot) that she breaks free of her cursed chains, despite the fatal consequences? The latter would be a revolutionary threat to Victorian morality and the patriarchy, which is perhaps why she had to be punished with death.

Contemporary adaptations of the Lady of Shalott have taken her out of the tower and out of poetry. She can be found in movies, video games, music, and other media. While some of these maidens keep their traditional personas, others are shaped to represent current issues around gender, sexuality, race, and more.

In “The Modern Lady of Shalott,” you will see how artists and storytellers have stretched and reshaped Tennyson’s Lady. ∎

If you have questions about the exhibit, contact curator Margaret Sheble at msheble@purdue.edu. Enjoy reading about the University of Rochester Libraries? Subscribe to Tower Talk.