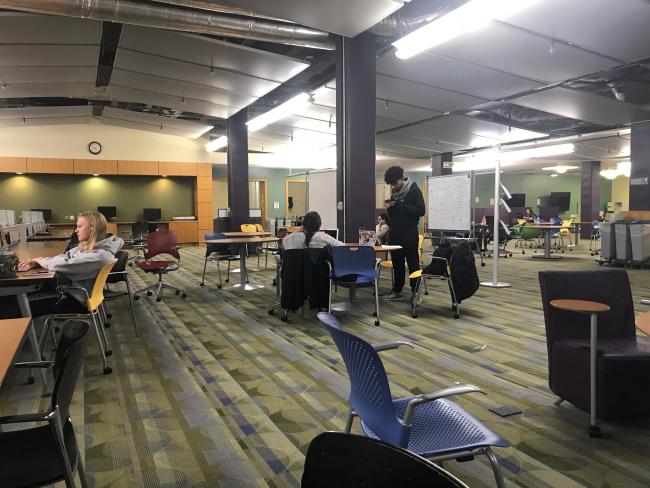 This “no-sleepover” started at 8:45 p.m. If you’re just joining, catch-up on the first three hours by reading Part I.

For everyone else, welcome back to the red-eyed observations of Tower Talk Editor Matt Cook and his conversations with Gleason Library's third-shift crew.

Ninety isn’t an insignificant amount of people, but this place feels empty. People are leaving more frequently. It’s a tough thing to see.

Idea: after midnight, anyone who leaves gives the three-finger salute from The Hunger Games as a gesture of respect to those who are still working.

I encountered my first sleeping person when I walked through the Quieter Study Room.

Midnight seems to be the quitting time that many students set for themselves. Several people—who were not together—got up, threw on their coats and bags, and then left, at the same time, as if it was a choreographed exit.

Is a flash exodus the opposite of a flash mob?

This scene has reminded me of the episode of The Office, where one of the characters tries to make ending the day with Semisonic’s “Closing Time,” an office tradition.

And now that song stuck in my head.

What have I done…?

I may need to take a break from reading Game of Thrones.

There is nothing remarkable about what’s happening at this time. It’s exactly what you might expect, other than the fact that there are still almost 80 people in here.

I do feel like students may have entered that time where they are eager to indulge any distraction that grants them a brief respite from their work. At least, that’s my hope as I’ve chosen the student I’ll be interrupting next.

I crashed a film major’s work session. He’s here mainly because his roommate is kind of loud and he doesn’t want to “be the guy saying ‘turn that down!’” He’s only planning to be here for another hour, but he’s seen 6:00 a.m. We talk about what it’s usually like in here, and he tells me it gets crazy sometimes. He said he’s seen people crying in here before.

If he stays here late enough, he might see me cry.

The conversation with the film major may have given the impression that everyone here is miserable. That’s not the case.
For the last hour, a group of five freshmen seemed to be having the time of their lives. I went over to see if they were losing their minds. They might have been.

The group was wrapping up a six-hour session for a mechanical engineering class project. They were quick to explain it wasn’t a case of procrastination. They had discovered some mistakes they had made and were trying to fix them before the deadline.

We discussed some of Gleason’s merits as a study space, and we all agree it’s like being at home without being at home.

It’s getting palpably drowsy in here, and the din of activity has dropped to the point that any sound is borderline startling. The quiet feels like an enormous weighted blanket draped over the room. If someone were to dim the lights somehow and increase the temperature by 10 degrees, I’m certain it would instantly knock all of us out.

I need to move around.

The officer asked me how my night was going, and quickly moved on to his real question, “Can I see your ID?” Once we were in agreement that I was not a threat to anyone, we talked about what officers like him do at this time of day. They are mainly there to shut down parts of the library and make sure there is no one in the spaces that shouldn’t be. But they are also looking out for students’ well-being.

In general, I got the sense that security’s presence is less of a “Big Brother” vibe and more like the mom who pokes her head into the sleepover for the fifth time to make sure everything is OK.

Long-abandoned whiteboards are filled with equations that mean next-to-nothing to me. I found one I could at least make sense of; here’s a bit from that:

“Free will compatible w/ predictability — even if someone/something’s predictable, you can’t control them.”
I wonder if whoever wrote this cited the conversation between Neo and The Architect from The Matrix: Reloaded.

Gleason is now the only space still open on the River Campus. I’d clap to recognize the significance of this special hour, but I don’t want to make my presence any weirder than it already is.

Everyone who was studying in iZone—and in other pockets of Rush Rhees Library—who didn’t go home is here now. It’s breathed chaotic life into the room, like when a roommate comes home from a night out and seemingly doesn’t care that you might be asleep.

I met some unicorns.

It was a group of four students—a freshman, two sophomores, and a junior. They were among the students who migrated from iZone. They set up in front of me, but I didn’t pay them much attention until they started rehearsing a presentation. I started looking around to see if others were also seeing what I was seeing. I couldn’t fathom four people agreeing to be doing that at this time of day. It was beautiful. I had to know more.

The group has been at it since 8:00 p.m. They started in iZone because it has a projector that allowed them to rehearse with their slides. All of this was to do some last-minute fine-tuning for their marketing class final project—a business plan for a product of their creation. They went with a wireless Wi-Fi charging station. My curiosity got me asking questions about it; next thing I knew, I had become a focus group of one. I shook myself out of whatever unicorn spell they cast on me and reminded them that I would be the one asking the questions.

Once we were back to talking about what they were doing here, they said this was out of the norm for them. They are all here simply because they all want to do well on this project. At one point, one of them assured me they are “not that hardworking.” It left me wrestling with a hypothetical/existential question, “Do unicorns know they’re special?”

Socializing is now taboo. Everyone is either focused on or commiserating about their work. The unicorns appear to be launching into a second run through their presentation.

I’m afraid to talk to anyone else.

Overheard: “We have a [Mechanical Engineering] project due in 5 hours.”

Just hearing that made me hot with anxiety.

The mechanical engineer’s woes made me wonder if most people here at this time are in that “due in X-hours” boat. I decided to test that theory on a student sitting at the table right next to me.

I started with an apology. Frankly, every conversation that takes place in the 4:00 a.m. should probably begin with, “I’m sorry.” I got right to the point: Why are you here so late (early)?

As she started speaking, I immediately heard the I-want-to-go-to-sleepness in her voice. (Does shame make your hands clammy?) She said she was working on a history paper due Tuesday (it’s Thursday), but if she turns it in today (at 4:50 p.m.), she’ll get an extra three points of credit.

That seems crazy. Unless those points have a significance that I don’t understand, I may have met another unicorn.

She’s thinking about double majoring in history and international relations, might try to work in the State Department; she’s still figuring it out.
She also told me she's been here since 1:00 p.m.; I took that as my cue to leave her to her work.

I’ve reached my self-imposed stop-time. The thought of leaving has done something to my body chemistry. I don’t know if it is adrenaline, a third-wind, or unadulterated joy, but it has made me more confident about my drive home.

If Gleason had a motto, it would probably be “Alone together,” and that idea has resonated with me more in these last few hours than the previous five.

Sure, my reasons for being here differ greatly from those of the students, mainly because mine are completely manufactured. Still, all of us, regardless of our reasons, have been here not sleeping, when that’s all we want to be doing. I’d like to think we’ve all been here silently empathizing with each other. That thought has my imminent departure feeling a little like desertion.

Thankfully, the unicorns have freed me from my feelings of betrayal. They’re packing up to fly back to whatever sky palace they came from. And if they’re not staying, I’m not staying.

What happened after I left? I couldn’t stop wondering how things changed after 5:00 a.m. At what point does Gleason start to come back to life?

Several days later, after successfully resetting my sleep-cycle, I returned to Gleason. I wanted to see what was happening at 6:00 a.m. What I found was not revelatory—6:00 a.m. looks a lot like 5:00 a.m.

Tradition dictated that I bother at least one student while I was there. I spoke to a sophomore, Vaibhav, and right away, I knew I chose wisely.
When I asked how long he’d been in Gleason, he said he needed to think so he could “give me the right data.”

He told me he’d been there since 1:00 a.m., doing computer science work that he started ten hours earlier.

At 3:00 p.m., he went to the computer science (CS) labs because he needed a computer.

Around 1 a.m., a group in the lab started talking too loud for him. He considered iZone, but Gleason had fewer people, less noise.

He admitted what he’s doing is extreme. He doesn’t usually do this. But it’s finals week. He compared it to the end of a marathon, when the racers are sprinting, even though they’re exhausted; they’re sprinting because they want to win. This insane work session is his sprint. He wants to win in math. These past 15 hours have been an effort to give himself plenty of time to focus on his math final. If he does well, he’ll get an A; even if he doesn’t, he’s looking at a B-.

Vaibhav may be yet another unicorn, but I’m starting to think this is just what a Rochester student is and does. ∎

For more information on the Gleason Refresh Project or to make a gift in support of the project, contact River Campus Libraries Director of Advancement Pamela Jackson. Enjoy reading about the University of Rochester Libraries? Subscribe to Tower Talk.