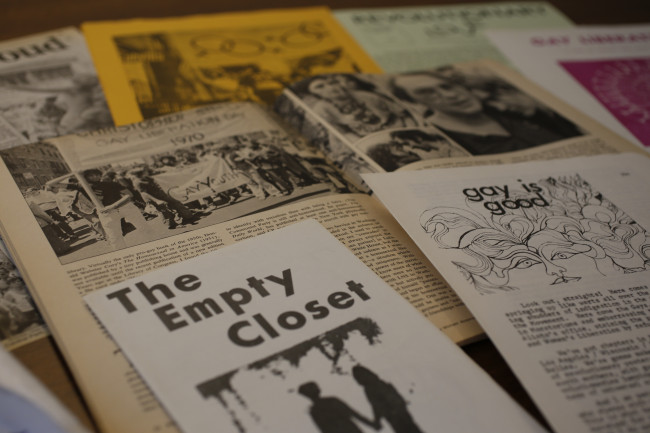 It’s almost June. Does that feel right? The way time passes these days…

*Creak* It’s been three hours since you last looked at the clock.

The whoosh and creak of recent history is in large part due to COVID-19—obviously—but it’s also all the social, political, and economic turmoil happening around us. It’s why one day you’re watching it snow, bemoaning quarantine life, and next thing you know, May is ending, you’re vaccinated, and Pride Month is around the corner.

Although there’s no universal Pride Month 2021 theme, NYC Pride’s theme captures the chaotic moment we share: “The Fight Continues.” It fits the pandemic, but speaks to a far more complicated time. The theme’s announcement points to many different fights, including “issues of police brutality, the alarming murder rate of trans POC, economic hardship, climate disasters, violent efforts to disenfranchise voters, our rights as a community being questioned at the level of the Supreme Court, and more.”

The “fight” also speaks to the continuation of efforts that began more than 50 years ago with the events at the Stonewall Inn.

Earle explains that early Pride demonstrations were about rebelling against discrimination and refusing to hide one’s true self. The expression of self-love was and is a protest against hate and ignorance.

“Pride can feel glossy and corporate these days, but at its core, it’s still about visibility and solidarity,” says Earle. “That fuels and supports the fight for the issues queer folks still face.”

Rochester has a rich history of Pride and protest. Earle’s connection to the LGBTQIA+ community is fueled by that history. In honor of Pride Month, we’ve asked Earle to share some of that history—and their personal perspective—with you through RBSCP collections they have organized.

This is a rather small collection, but a very important one in the history of Rochester's queer community. The GBR was a student-led community group which first formed at the University of Rochester as a subgroup of the Gay Liberation Front in 1970. They were later a founding affiliate group of the Gay Alliance of Genesee Valley (later, the Out Alliance), which has long been a strong center for LGBTQIA+ community and organization in Rochester.

This collection holds early handwritten meeting notes, lists of priorities for action, and resolutions on how the group wanted to function. Many of the names that appear in the collection belong to members—just college students at the time—who would go on to become pillars in the Rochester community and in the fight for gay rights.

RJ Alcalá ʼ71E is one of founding members of the Gay Liberation Front at the University and is credited with naming the group’s newspaper, The Empty Closet. Containing material from 1962 to 2003, the collection presents an excellent view of the evolving local and international landscapes of the gay rights movement and gay community.

You will find pamphlets with angry poetry. The verse was written by young, gay Americans who went to march in Cuba and were told that the revolution they'd come to support didn't support the revolution that they needed to happen. You will see protests held by the community whose suffering and deaths were ignored by a government trying to pretend an epidemic wasn't killing hundreds of thousands of people. I'm glad to say, you will also see a great many celebrations. It's really something to see the many wins that had to happen to enable the early clandestine meetings in basements to evolve into the Gay Games, a big, glossy commemorative program that took over New York City in 1994.

We haven't quite finished processing this collection yet. I wanted to include it because it presents such a personal perspective.

Backstreets Bar opened in 1983 on Charlotte St., behind The Little Theatre. Besides being a bar, it also served as the center of the queer community. Community fundraisers, protests, picnics, and parades were all organized and held at Backstreets. The bar’s owner, Jim Van Allen, was a big part of organizing the early Rochester Pride events.

The collection holds dozens of candid photographs from drag shows, Halloween costume contests, and the highly popular Mr. Upstate Competition. There's a folder of materials from a very early transwomen's group who met there some evenings. There are also birthday shots of balloons and 80s-tastic hors d'oeuvres lovingly arranged and shot with blown-out flash. But what this collection really highlights is the queer community in a haven that allows them to relax and be themselves. The people in the photos are always smiling and laughing. This is the place they fought for. For me, a queer person living in Rochester almost 40 years later, this is what Pride looks and feels like. ∎

If you have questions about the contents of these collections or any other of the RBSCP’s LGBTQ+ collections, contact the Department of Rare Books, Special Collections, and Preservation at rarebks@library.rochester.edu. Enjoy reading about the University of Rochester Libraries? Subscribe to Tower Talk.