A tribute to an impassioned advocate of education and the libraries, thoughtful philanthropist, and a devoted wife
Image 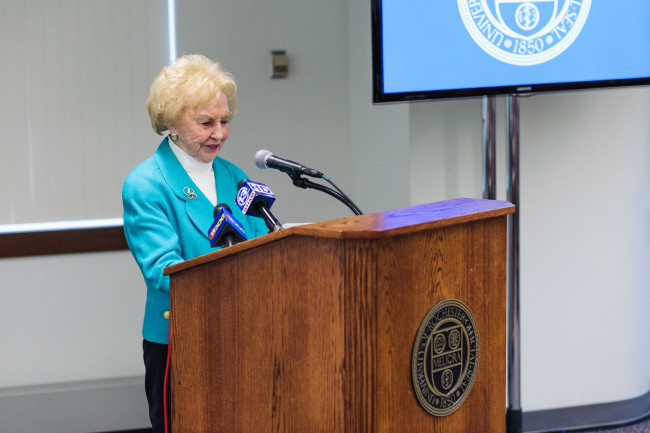 The City of Rochester and the University of Rochester lost a luminary when Catherine Breslin Carlson died on September 27. Catherine devoted most of her adult life in service to the legacy of Chester F. Carlson, the inventor of the transformative technology, xerography. Xerography’s first transformation was to change the Haloid Company into Xerox, which with Joseph C. Wilson, was a major socio-economic force in the Rochester community.

Catherine Carlson’s interests included education and libraries, with a particular interest in people who were less fortunate. She supported many projects at the University of Rochester, including the River Campus Libraries. We are profoundly grateful for her interest and encouragement, including giving original manuscripts, photographs and memorabilia to create two Carlson collections in Rare Books and Special Collections; supporting the Hawkins- Carlson Room named in honor of Chester Carlson and his mother,

Most prominent on the River Campus is the Chester F. Carlson Science and Engineering Library. The Carlson Library was originally located in Hutchison Hall. When the library was officially dedicated in its current home, the Computer Science Building on October 23, 1987, Ms. Carlson spoke on behalf of Dorris Carlson, Chester Carlson’s widow; her remarks are preserved in the Carlson Family Papers. In 2004, another dedication took place when a permanent exhibit was installed in the library’s atrium. Included is a 1944 prototype of Mr. Carlson’s copier; another example now housed in the Smithsonian.

In 2013, the Carlson Library hosted an event to celebrate the 75th anniversary of xerography, where Ms. Carlson spoke about Mr. Carlson and the societal impact that he made. The Carlson Library staff annually mark October 22, the date xerography was invented in Astoria, New York, providing students with cupcakes and sharing the story of his great invention.

Ms. Carlson was very interested in libraries, in particular their continuing relevance. This led her to support iZone, a collaborative hub for problem solving and the exploration of ideas for social, cultural, community and economic benefit.

“Catherine Carlson touched so many lives in the Rochester area,” says Mavrinac. “Her deep concern for the less fortunate and her keen interest in the power of  education and the role libraries play in the health and well-being of society, has left a legacy, the likes of which will continue to inspire us all for years to come. It was an absolute privilege to get to know Catherine and to witness her dedication to Chester Carlson’s life. We are ever grateful to her for her encouragement and support.”