Somewhere next to the rainbow

The University Libraries created a new inclusive symbol, inspired in part by one staff member’s association with the pride flag. 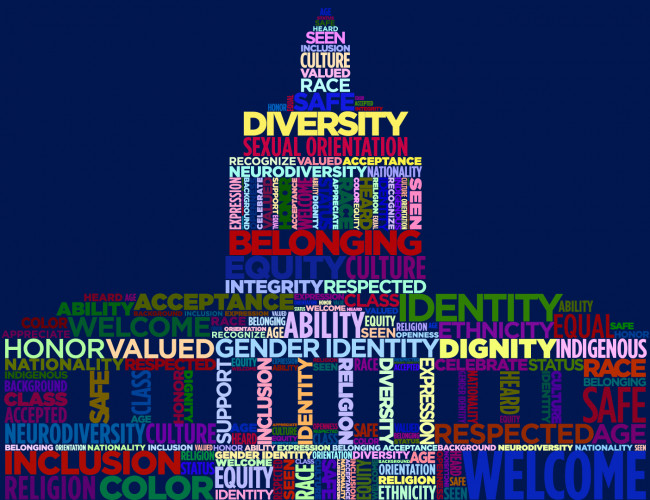 Looking only at the past five years, Americans have caused each other, specifically those who belong to the Black, Asian American and Pacific Islander, and LGBTQ+ communities, a lot of pain. Here are a few moments you likely remember:

May 26, 2020—During an arrest, a police officer in Minneapolis kneels on the neck of 46-year-old Black man George Floyd until he dies.

January 28, 2021—Victor Ratanapakdee, an 84-year-old Thai immigrant in San Francisco dies from a head injury sustained from being shoved to the ground.

Again, this is only a sample of violence that made headlines, let alone what went unreported. With each new tragic event comes a renewed demand for change. While these events are often the result of systemic issues with no simple solutions, a University of Rochester Libraries-led initiative signifies that racism and hate are unwelcome in library spaces.

With the partnership of the Office of Equity and Inclusion (OEI) and University Communications, the libraries developed a new University symbol to help communicate that Rochester is dedicated to cultivating an environment in which all feel welcome and respected. Michael Osadciw, creative and design manager in University Communications, used multi-colored words that convey values, feelings, personal descriptors, and actions to construct an inclusive image of Rush Rhees Library. The “welcome cloud” can currently be seen on signs in Rush Rhees Library and the Carlson Science and Engineering Library. Soon, the symbol will also make its way into the Sibley Music Library at the Eastman School of Music and the Edward G. Miner Library at the Medical Center.

For Mercedes Ramírez Fernández, the Richard Feldman Vice President for Equity and Inclusion and chief diversity officer at Rochester, the use of Rush Rhees Library, an iconic University building, will help it resonate with the University community regardless of their affiliation.

“It’s beautiful,” Ramírez Fernández says, “and it helps affirm and celebrate our efforts to build a diverse culture. It’s also been great to collaborate with the libraries. I was super excited that Randy took on this project. There’s already a lot of enthusiasm. People are asking me if it can be a print because they want to put it in their office.”

The welcome cloud idea was born out of a conversation Randall Cook ʼ93, ʼ96S (MBA), assistant dean for the River Campus Libraries, and his husband, John, had during the period when Black Lives Matters demonstrations were being held in response to the murder of George Floyd. While discussing the rash of hate- and racism-related deaths, their conversation eventually turned to their personal experiences as openly gay men.

“It led to us remembering how we used to feel when we saw the pride flag,” Cook says. “And that was sort of a lightbulb-type moment. It sparked the idea of having a symbol like that, but on a broad scale.”

Artist Gilbert Baker created the pride flag in response to San Francisco City Supervisor Harvey Milk’s challenge to create a symbol of pride for the LGBTQ+ community. (The challenge was prompted by the impending Gay and Lesbian Day Parade, held June 25, 1978.) Inspired by how the American flag was used during the United States’ recent bicentennial celebrations, Baker went with a flag. For the design, he chose an eight-banded rainbow, which, according to the Museum of Modern Art, he considered a “natural flag in the sky.” He also appreciated a rainbow’s “universality.”

There’s a more romantic notion that Baker was influenced by Judy Garland’s “Over the Rainbow.” When you consider the lyrics (not to mention the longing way Garland sings them), it’s easy to see how Baker, or anyone else in the LGBTQ+ community at that time, might have identified with the song. But, regardless of the song’s role, Baker’s flag became a way for those in the late-1970s LGBTQ+ community to identify the spaces where they were accepted and free to be themselves. The flag had that “over the rainbow” effect on Cook in the early 1990s.

Cook and his husband were both openly gay men when they began their relationship in 1992. However, they hadn’t yet come out as a couple, which wasn’t easy or common to do at that time. Still, it was also something they were committed to doing—neither wanted to be switching each other’s pronouns or behaving in other coded ways to more easily fit in at work or other social situations. Having been raised Jehovah's Witness on a dairy farm in a rural community, Cook wasn't a stranger to the coming out process's difficulties. And one can never be fully prepared to be mocked or attacked because of who they are. All of this made the pride flag a welcome sight.

“It was really meaningful,” Cook says. “We knew we could be a couple. In restaurants, we could act like we were on a date and not having a business meeting. And it never felt like a marketing ploy. We didn’t think homophobic people were going to put the flag up just to get business. It always felt like a genuine symbol of inclusion.”

Given the length and depth of Cook’s relationship with the pride flag, it has to be noted that the welcome cloud has already stolen a piece of his heart. Upon seeing the symbol for the first time, he said, “I absolutely love, love, love this.”

Neither the libraries nor OEI feels they have checked a box with the creation of the welcome cloud. Both know there’s still work to be done. The symbol is intended to be an affirmation, another step toward creating a truly inclusive and equitable community at Rochester. It builds on the work Ramírez Fernández and her team are already doing, which includes developing sustainable infrastructure and creating a more diverse community through enhanced recruitment and retention of faculty, staff, and students.

“Artifacts are important,” Ramírez Fernández says. “But it’s really important for people to be able to see themselves represented at the University, in addition to feeling welcome, respected, and treated as an equal.” ∎

To learn more about equity and inclusion at the University, contact Jim Ver Steeg, assistant vice president of public relations and engagement in the Office of Equity and Inclusion, at jim.versteeg@rochester.edu. Contact Randall Cook, assistant dean for the River Campus Libraries, at rcook@library.rochester.edu for more information on the welcome cloud.