A tale of two contemporaries

How much could a 19th-century British monarch and an American women's rights activist have in common? More than you might think. 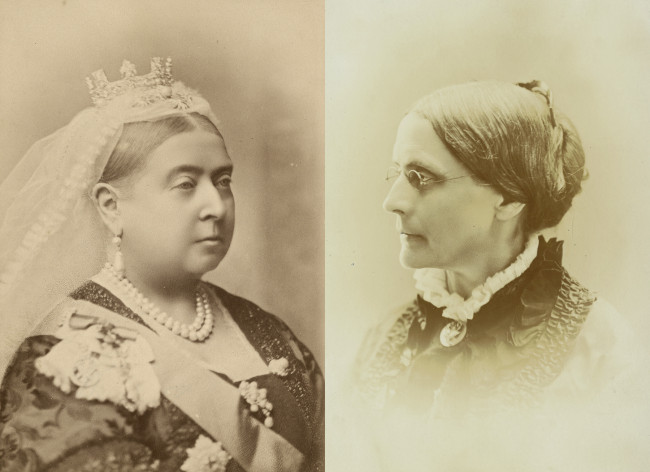 Alexandrina Victoria was born on May 24, 1819, in London, England. She is more commonly known today as Queen Victoria.

Across the Atlantic, on February 15 of the following year, Lucy Read gave birth to a daughter, who took the name of her father’s sister, Susan. History and the women’s suffrage movement remembers her for her full name, Susan B. Anthony.

On September 4, the English queen and the American suffragist will headline a talk from the University of Rochester’s Jean Pedersen, associate professor of history. Queen Victoria, Susan B. Anthony, and the Complex Worlds of Victorian Women will explore 19th-century European and American debates over women’s rights and roles.

Some might say you couldn’t find two women with less in common than Queen Victoria (QV) and Susan B. Anthony (SBA).

The two women had diametrically opposite positions on women’s rights...

QV:  “I am most anxious to enlist everyone who can speak or write to join in checking this mad, wicked folly of ‘Woman's Rights’ with all its attendant horrors on which her poor, feeble sex is bent, forgetting every sense of womanly feeling and propriety.”

SBA: “There never will be complete equality until women themselves help to make laws and elect lawmakers.”

And when it came to contentment, they seemed to have very different priorities...

QV: “Everybody grows but me.” (She was barely five feet tall.)

However, they felt had similar feelings on losing...

QV: “We are not interested in the possibilities of defeat. They do not exist."

As well as marriage...

QV: “A marriage is no amusement but a solemn act, and generally a sad one.”

SBA: "Marriage, to women as to men, must be a luxury, not a necessity; an incident of life, not all of it.”

Were they so different? We think it deserves further examination.

Had a partner in leadership: SIMILAR

QV: Her husband, Prince Albert. While primarily known for being her spouse, Albert quietly played king to Victoria’s queen, providing counsel on all matters involved with running the country.

To say Victoria adored Albert would be a tremendous understatement. When he died unexpectedly from typhoid at only 42 years old, she was utterly inconsolable—“Without him everything loses interest.” That included the monarchy. In mourning Albert (which she did for 40 years), she neglected her royal duties to such an extent that she earned the moniker “Widow of Windsor.”

Matching Anthony’s views and passion in breadth and intensity, made the two fast friends. Her children helped them become a weapon against oppression. With zero children to Stanton’s seven, Anthony became the voice of Stanton’s pen. In Stanton’s words: “I forged the thunderbolts, and she fired them.”

Connection to the American Revolution: DIFFERENT

QV: Her grandfather, King George III, was the target of a list of 27 grievances made by American colonists, who considered him a tyrant.

SBA: Her grandfather, Daniel Read, was among the aggrieved colonists. He fought for American independence under Benedict Arnold and Ethan Allen.

QV: Victoria began writing in a journal at the age of 13, which she dutifully wrote in for the next 69 years. With the addition of letters, she was writing almost 2,500 words a day.

With unexpurgated material, her collected writings would have filled about 700 volumes. The surviving content fills 141 volumes, totaling 43,765 pages.

SBA:  Anthony is the co-creator of The Revolution, a weekly newspaper (1868–1872) that focused on women’s rights and was a contributor to the six-volume History of Woman Suffrage. She was also an exceptional pen pal. Anthony often wrote to Stanton, as well as others involved in the movement, including Isabella Beecher Hooker and her “most cherished young lieutenant,” Rachel Foster Avery.

QV: Victoria’s reign of 63 years is the second-longest in the history of the British monarchy. Its length and impact on the British Empire are why she is namesake to an era of world history.

SBA: Anthony’s unyielding pursuit for women’s right to vote was posthumously rewarded with the ratification of the 19th Amendment, known as the Susan B. Anthony Amendment.

So where does this leave us? Would the two have been friends if they shared a country? No—Victoria’s views on women’s rights would have been a non-starter for Anthony. But their similarities highlight common threads of character that are fundamental to why both were powerful women in a time when men mostly held power.

Looking to bone-up for Professor Pederson’s talk? Just want more Queen Victoria and Susan B. Anthony? Our outreach librarians have some suggestions on where to start.

Those looking for something more visual in nature on the Women’s Suffrage Movement might try Not for Ourselves Alone: The Story of Elizabeth Cady Stanton & Susan B. Anthony, a documentary by Ken Burns on the history of women's suffrage in the United States.

If you’re interested in Susan B. Anthony, you can see digitized and transcribed materials from Rare Books, Special Collections, and Preservation through a digital exhibit, curated by Mary Huth, emeritus University of Rochester manuscript librarian.

For a thorough account of Queen Victoria’s contradictory views and lasting influence, check out Queen Victoria: A Life of Contradictions, by Matthew Dennison. ∎