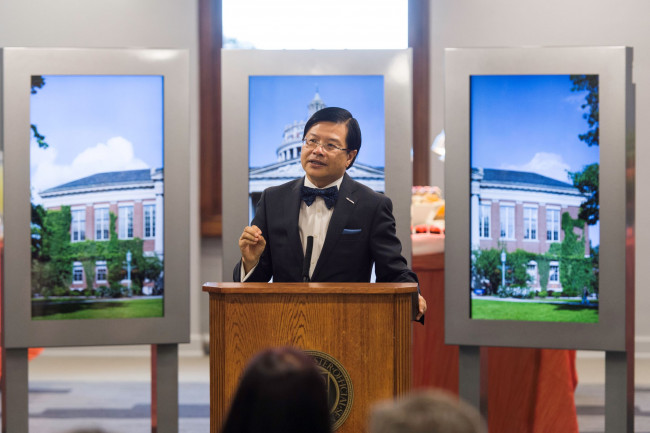 When Mr. Lam attended Rochester as an undergraduate, he found inspiration and refuge in the libraries, commenting, “The center of my college life was the iconic Rush Rhees Library. It was my home where I could learn, discover, network, and even sleep and enjoy a good rest.”

It was fitting that in 2015, Evans and is wife, Susanna, donated $1 million to support the development of Evans Lam Square, a state-of-the-art intellectual crossroads for students to explore knowledge, obtain information, work between classes, experience new technology, and participate in programming.

Mr. Lam is an extremely active and connected University advisor, leader, and philanthropist, serving in a variety of leadership roles, including being an honorary member of the River Campus Libraries National Council, providing advice, support, advocacy, and passion about the libraries, including iZone, a collaborative hub for students to explore ideas and solve problems for social, cultural, community, and economic benefit.

Judith Kharbas, chair of the Friends’ Nominations Committee remarked, “This year the Friends arevery pleased to recognize and thank Evans Lam for his many significant contributions which have helped modernize and transform the patron services areas of Rush Rhees and to honor him with the 2019 Robert F. Metzdorf award.”

Mary Ann Mavrinac, vice provost and Andrew H. and Janet Dayton Neilly Dean, University of Rochester Libraries, believes Mr. Lam, “is an extremely worthy recipient of the Metzdorf Award, who joins several eminent awardees. He has made a transformational difference to the libraries, and more importantly, in the lives of students and faculty.”