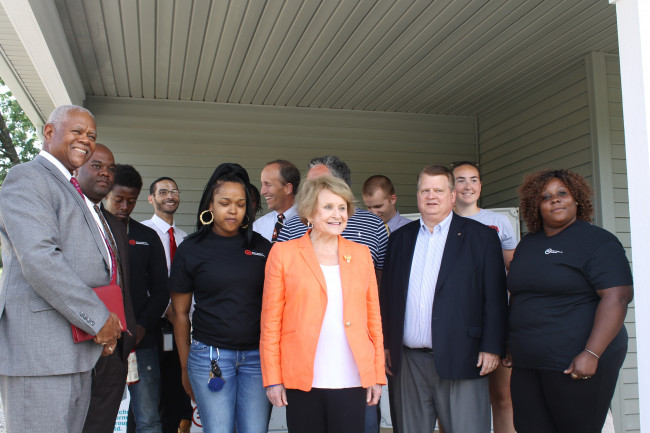 Business, development, education, homelessness, housing, and job creation were important features of Congresswoman Louise Slaughter’s program for improving the district that she was elected to represent in the House of Representatives. Her constituency trusted her when she promised that she would do all within her power to bring federal funding to western New York to improve living conditions and standards and to support the many efforts of organizations and institutions that served the vulnerable. Over the course of her career, she managed to secure millions, if not billions of dollars to fund projects that aided in community transformation and uplift—like the Rochester Urban League (RUL).

The RUL was founded in 1965, following the riot that occurred in Rochester in July of the previous year. The riots revealed the pressing needs of the people and the many ways that community members felt betrayed by their government. What was happening in Rochester was also happening in other cities across the country like New York City, Los Angeles, Chicago, San Francisco, Oakland, Atlanta, Washington D.C., and many others. Though the governmental response was required, there were many people living in the communities that were burning, and with such linked fates they too recognized the pressing needs for a ground-up approach to improving the conditions of their neighborhoods. Thus, seeking recovery and uplift, the RUL, as they note, “was intended to address the material needs of poor and minority citizens in areas such as housing, employment, education, health and economic parity.”

By establishing the RUL, those community leaders were following in the footsteps of George Edmund Haynes (first African American to receive a PhD from Columbia University) and Ruth Standish Baldwin (prominent New York white philanthropist) who initiated the founding of what we now know of as the National Urban League (NUL).  The founding aims of the NUL were eliminating racial segregation and discrimination and helping African Americans and other minoritized groups in America gain equal access and footing at all levels of society. It was the result of the merger in 1911 of three service and racial uplift organizations including the Committee for the Improvement of Industrial Conditions Among Negroes in New York (1906), the National League for the Protection of Colored Women (1906), and the Committee on Urban Conditions Among Negroes (1910). These groups were originally formed to assist the many African Americans migrating into New York City in the search of jobs and housing during the Great Migration. Eventually, they expanded to include provisions beyond the general needs for security and well-being. They were also instrumental in helping those migrants (the majority of whom coming from rural provinces in the south) adjust to the conditions and lifeways of urban living, employment rights, civil rights, environmental conservation and protection, and anti-poverty. As the organization grew in interests and membership, chapters were formed in other cities and states.

“The mission of the Urban League of Rochester, NY is to enable African-Americans, Latinos, the poor and other disadvantaged to secure economic self-reliance, parity and power and civil rights.”

It’s not hard to imagine then how Louise Slaughter would find commonality between the agenda that she fought for in Washington, D.C. and the one upon which the RUL pursued. There, they engaged a partnership that brought notable improvements and community initiatives to the northeast corridor of the City of Rochester. Their coalition work and respect were mutual.

As Slaughter challenged and debated her colleagues in Washington for increasing appropriations business, industry, and trade, she also got them to see how those increases should also directly impact other solutions for decreasing funding gaps in other areas such as housing and education. While she argued for improving the airlines, she also argued for the benefit of small businesses, senior citizen services, and the construction of affordable housing. Observing her advocacy and work in congress, many of her colleagues, in the end, described her as one of the most “tenacious legislators” to have ever served in Washington. And, others like her constituents, noted that that was simply how much she loved Rochester.

In the RUL’s pursuits of helping community members acquire economic self-sufficiency or homeownership or some other entrepreneurial endeavor, they were in lockstep with Slaughter for which she included the organization in many of her projects. She wrote grant support letters to ensure their funding, she helped spread the word about the organization’s services throughout the district, and even brought them along for the ride. Slaughter found partnership and included them in the Renewable Communities seminar; aided in securing a $56,000 grant through the Affordable Housing Program to support their housing initiative for low-income persons with developmental disability and their families; obtained $98,257 to support their Entrepreneurial Assistance Center (including the Entrepreneurial Assistance Program and Business Planning Workshops); and support the organization’s quest for $1,100,000 from the Department of Labor’s Employment and Training Administration for their YouthBuild program to provide education experiences, training services, and construction skills to low-income youth in the city.

It is not clear how or when they started working together and all of the many ways, they helped each other; however, the record makes clear that they were a formidable coalition against the ills that plagued communities of color. Slaughter and the RUL’s work materialized in many ways throughout the City of Rochester and helped to improve the lived experiences of many young people and disadvantaged families. Theirs was an effective and transformative partnership.

The work continues. As their website advertises, building on their and the original mission of the NUL, “Today, the Urban League of Rochester offers over 30 programs in the areas of youth services, services for the developmentally disabled, economic development, employment services, family and children services, education, homeownership and entrepreneurial assistance.” And we acknowledge their perseverance in Rochester and celebrate along with them as they observe the 110th year of the Urban League’s founding.