The enduring and growing significance of the John A. Williams Papers
Image 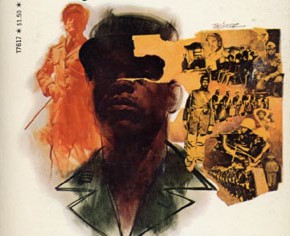 There are few things more satisfying for those working in archives and special collections, than to see a completed project come out of the stacks and into the world. It is a testament to the value of historical material, as well as a way to connect the past to the present and the future.

One of the most exciting recent fruits of the archives is Conversations with John A. Williams, a volume of interviews with the renowned author, journalist and academic, edited by University of Rochester professor of English Jeffery Allen Tucker, and published by the University Press of Mississippi in 2018. Dr. Tucker recently spoke of his work with Williams in a recent Neilly lecture. Dr. Tucker has used the John A. Williams collection extensively, both in his teaching and in his research. He has also contributed to the collection himself, adding value and scope to this important archive.

“About a third of the interviews in Conversations with John A. Williams were found originally in the collection in Rare Books Special Collections (RBSCP) and Preservation, and materials in that collection put me on the trail of many of the other interviews,” Tucker says. “Conversations also includes one of several interviews that I conducted with John and Lori Williams myself; digital video recordings of those interviews are now also part of the Williams archive.”

RBSCP is especially pleased to be the home of the collection of record for John A. Williams (1925–2015). While Williams had no specific connection to the University of Rochester, it was a series of important contacts and growing friendships that made the acquisition of these important papers possible.

When the papers were acquired in 1986, it was with a mind and an eye to building holdings in modern collections, especially that of post-World War II American literature. A prolific author and journalist and a long-time professor at Rutgers University, Williams was said to have “come as close to any to putting into fictional terms the experience of being black in America.”

And while he is not as well-known as authors such as Richard Wright and James Baldwin, Williams has a solid place in American literary history.

It was through the vision of previous directors of RBSCP, Peter Dwonkowski and Richard Peek, along with widespread support across the University of Rochester campus that made this acquisition possible. The collection itself consists of 179 boxes of material, documenting a broad body of work which

Includes thirteen novels, two books of poetry, eight books of non-fiction, more than fifty published essays, two libretti, and several plays and television/film screenplays. At the time of processing in 2002, the collection measured approximately 88 feet and it has grown since that time.

With the exception of a subset of materials held by Syracuse University, Williams’ alma mater, the University of Rochester holds the complete, extant John A. Williams archive which includes manuscripts, typescripts, drafts, notes, proofs, photographs, audio-visual materials, ephemera, diaries/journals and correspondence. The correspondence includes letters from literary luminaries such as Henry Roth, Chinua Achebe, Philip Levine, Ishmael Reed, Gwendolyn Brooks and more than 100 letters from Chester Himes. An exhibition, curated by Richard Peek and John A. Williams, along with the support of the staff in RBSCP and others, including Tucker called, Writing of Consequence: The Art of John A. Williams occurred in 2004, and a version of that exhibit is still available online.

Richard Peek said in his introduction to the 2004 exhibition, “the University of Rochester’s Rare Books and Special Collections is honored to assume curatorial custodianship of the Williams legacy and to provide a safe harbor where the archive can continue to grow, be preserved and made accessible for

generations to come, and with the work of scholars like Jeffery Tucker, we look forward to seeing Williams’ work receive more attention and appreciation in the future.”

This collection is open to all for research, scholarship, and exploration.