Studio X, Rochester’s hub for extended reality, is taking a name that honors a ‘transformational legacy’ 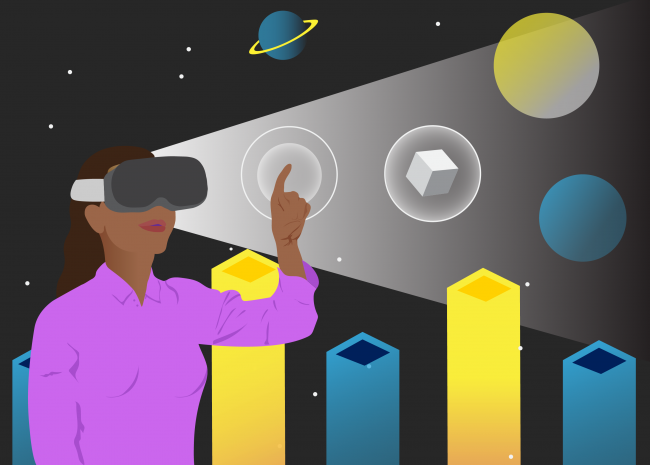 In 2012, Evans Lam ʼ83, ʼ84S (MBA), a newly elected University of Rochester trustee, was in Manhattan for a board retreat. His fellow trustees and other colleagues, including retreat guest Mary Ann Mavrinac, former chief librarian at the University of Toronto Mississauga and the new Andrew H. and Janet Dayton Neilly Dean of the University Libraries, were sitting down to breakfast. Lam grabbed an open seat next to Mavrinac, creating a shockwave that rang the chimes of Rochester’s Hopeman Memorial Carillon on the River Campus.

We embellished that last part a bit, but knowing how the next 10 years unfolded, it’s hard to envision the meeting between Lam and Mavrinac as anything but supernatural.

The first conversation between Lam and Mavrinac began as one might expect. Mavrinac shared how she saw the libraries and identified some areas she wanted to improve. But the energy shifted when Mavrinac began describing the “new library.” She talked about the agoras of ancient Greece and how a library should be a place for gathering and exchanging ideas, how it should be more of an active facilitator than a stagnant space.

Lam was blown away. He says, “I still remember that definition of a library was really profound.”

That was the beginning of what Lam calls a “transformational legacy,” one that not only transformed the libraries’ physical spaces, but also its mission. “I will go as far as saying that, after Mary Ann, the purpose of the library is not the same anymore,” says Lam.

Lam, and his wife, Susanna, first contributed to the realization of this vision in 2015 with a $1 million commitment that helped establish Evans Lam Square.

Six years later, he effectively bookended his partnership with Mavrinac through the $250,000 Evans Lam Library Challenge. Kick-started on the 2021 Day of Giving, the challenge seeks to raise capital and endowment funds to equip and sustain Studio X. And, no big deal, the challenge would also result in renaming Rochester’s hub for extended reality, the Mary Ann Mavrinac Studio X.

"It’s overwhelming to be honored in this way by Evans and those who have followed his lead in supporting Studio X,” says Mavrinac, who is now also vice provost in addition to role as dean. “Really, it’s too large an honor, but I’m immensely thankful, especially to the Lams. Evans and Susanna have provided incredible support to the libraries and to me, personally, since I arrived at Rochester in 2012. They will forever be in my heart.”

Mavrinac says that at heart, the support is setting up the River Campus Libraries (RCL), particularly Studio X, for future success. RCL National Council member Jim Mayer ʼ82 is among the nearly 100 donors who have given to the Evans Lam Library Challenge, which is still active. Mayer has been involved with Studio X since it was just an idea.

“There was a presentation on Studio X at a council meeting, and I thought to myself, ‘I need to be part of this,’” Mayer says. “So, when I learned we were raising money for it, it was a no-brainer because it is an investment in the future of the University and the libraries. And it was an opportunity to recognize Mary Ann, who has enhanced the standard for the dean of the libraries.”

Bob Dardano ʼ77, another Lam Challenge contributor, was also as motivated to honor Mavrinac as he was to support a space that looks to the future.

“It’s sort of the next step forward for learning and for research and library work,” says Dardano of Studio X. “This is a ‘Wow’ thing, and I think it’s something that will attract students and faculty members.”

Construction on Studio X is currently on pace to be completed by the start of the Fall 2021 semester. There are currently plans for a “soft opening” during Meliora 2021 and a formal opening and dedication, when the space will assume its formal name, in Spring 2022. ∎