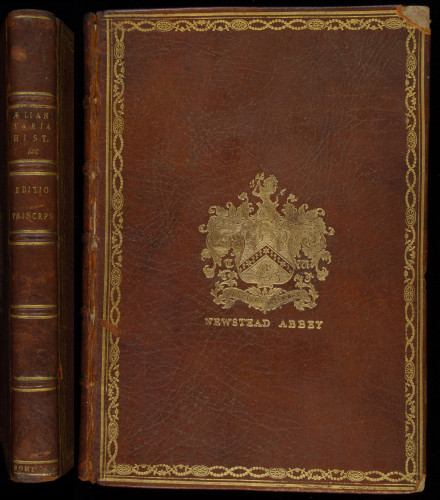 This book belonged to Colonel Thomas Wildman (1787-1859), an officer during the Napoleonic Wars and a close friend of the poet Lord Byron (1788-1824). Wildman's coat of arms is stamped in gold on both covers, and the name of the residence where this book was held, "Newstead Abbey", has also been included below. Located in Nottinghamshire, this countryside house was originally built as a monastery in the late twelfth century. In 1540, Newstead became the seat of the Byron family, and in 1818 Lord Byron sold it to his friend Colonel Wildman. The book was eventually acquired for our library by the well-known bibliographer and appraiser of rare books, Robert F. Metzdorf (1912-1975).

We also know that the binder of this book was John Bohn (1757-1843). In A List of London Bookbinders, 1648-1815, Ellic Howe includes a brief biographical sketch of this binder. Bohn was born in Germany and came to England in 1790. Five years later he opened his own binding shop at 31 Frith Street, London. His reputation as a bookbinder relied on mastering some special skills and features such as the hollow bindings employed for account-books, and the invention of a system of diamond graining on the covers of calf-bound books. In 1815, just after the Napoleonic Wars, when trade with the rest of Europe was again possible, Bohn became a bookseller (Howe, 1950: 14).

In the image above, we can see the printer device of Antonio Blado (1490-1567). Born in Asola, he began working at Rome in 1516, and it is known that he established his printing shop in Campo de' Fiori in 1534. From 1535 onward he held the privilege of being impressor cameralis, or printer for the Vatican. Blado was one of a very small group of publishers that produced Greek books at Rome in the second half of the sixteenth century.

There are two sources that offer us some sketches of the life of Claudius Aelianus—commonly known in English as Aelian. In his Lives of the Sophists, Flavius Philostratus (c. 170-c. 247) includes an account of Aelian's biography, and there is also a brief notice in the tenth-century historical encyclopaedia Suidas. Aelian was born a freedman (libertus) at Praeneste (Italy). At Rome, where he spent most of his life, he studied under Pausanias of Caesarea, acquiring such a mastery of the Greek language that he gained the nickname "the honey-tongued." Although he became a teacher of rhetoric, he eventually devoted himself to the writing of historical works. Aside from some scattered fragments from two treatises, three works by Aelian are extant. The De natura animalium contains 'facts' about the animal kingdom, many of the descriptions being borrowed from Greek writers. The Rustic Letters consists of twenty vignettes describing the life of the Attic countryside as recorded and inspired by the pastoral literature of the fifth and fourth centuries BC. Finally, our Collection Highlight opens with Aelian's third extant work Historia varia. In 14 books, it essentially includes a collection of historical and biographical anecdotes with the occasional digression on mythology and other similar subjects. To be precise, our Collection Highlight is the editio princeps of the Historia Varia, edited by Camillo Peruschi, Bishop of Alatri (d. 1573). For this first edition of Aelian's Historia Varia and Heraclides' collection of excerpts of Aristotle's Politeiai—in fact both works appear together in the manuscript tradition—Peruschi prepared a printer's copy, conventionally known in the history of the manuscript transmission of these two works (stemma codicum) as codex p (Codex Vaticanus graecus 1375). To compose codex p, Peruschi used the so-called codex a (Codex Parisinus graecus 1693) one of five independent transcriptions of codex x, which is now lost and, along with V, is one of the two major manuscript sources in this stemma. Around 1545, Peruschi borrowed codex V (Codex Parisinus graecus supplementi 352) to collate it with p, making numerous additions and emendations (Mervin, 1965: 71). However, many mistakes still remained undetected, and they were in fact perpetuated for the next three centuries until the 1858 edition of R. Hercher, who collated both V and a with greater accuracy (Mervin, 1974: xii-xiii).

The other works included in this edition deal with the topics of physiognomy and divination. Like many of their contemporaries, both Polemon and Adamantius argued that it was possible to read character by examining the face and other parts of the body. Also included in this volume are the two extant treatises on divination written by Melampus: Ex palpitationibus divinatio (On Divination by Palpitation) and De neuis (On Birthmarks).