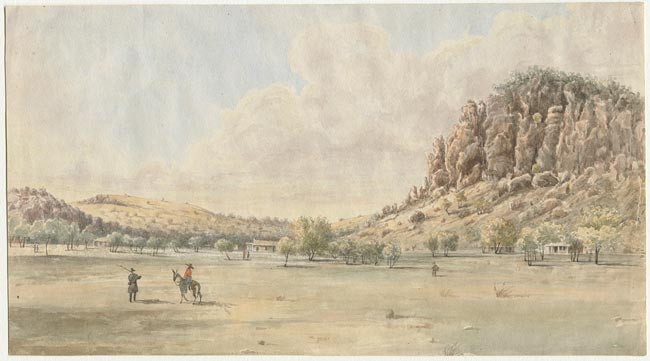 Colonel Arthur Tracy Lee (1814-1879) served as a regimental officer in the US Eighth Infantry for twenty-three years, twelve in Texas. He joined the army in the late 1830s serving in various posts before arriving in Texas in 1849. Lee, at that time a captain, was part of a force sent to west Texas to protect white settlers who were encroaching on Indian territory. His regiment was encamped at various posts including Camp Worth, Fort Croghan and Fort Martin Scott. In October, 1854 Lee and his regiment were ordered further west, into Apache territory, to establish a fort in the Davis Mountains. Here, inspired by the dramatic scenery surrounding Fort Davis, Lee painted and sketched many views. Today Lee’s paintings are prized as being among the earliest known pictures of West Texas and for the glimpse they provide of frontier life in the mid-1800s.

Lee remained in the army and was seriously wounded at Gettysburg during the Civil War. In 1869 he became governor of the National Soldier's Home and Park on the outskirts of Washington DC. In 1872 he and his family moved to Rochester, NY where their daughter Kate lived with her husband William J. Ashley. Arthur Tracy Lee died December 28, 1879 in Rochester. He is buried in the Ashley family plot in Mount Hope Cemetery.

The Arthur Tracy Lee Papers include seventy images of Texas and other locations painted and drawn by Arthur Tracy Lee. The collection was given to the library by Lee’s granddaughter Mary Janet Ashley in 1961.

Further information about Lee and his paintings can be found in Fort Davis and the Texas Frontier (Fort Worth, TX: Texas A & M University Press, 1976). Call number: ND1839 .L47Af.