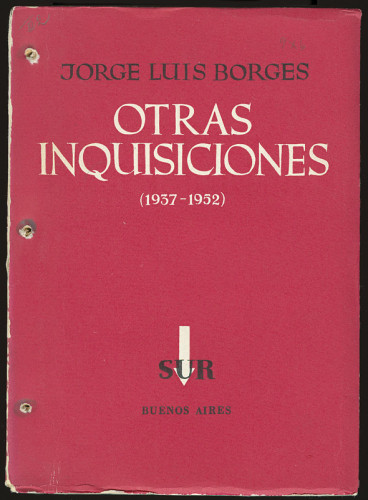 The thirty-nine essays of Otras inquisiciones deal with numerous themes such as literary criticism and theory, history, language, religion, philosophy, and metaphysics. Nevertheless, they cannot be described as "essays" in a strictly scholarly sense. They rather belong to that tradition initiated by Michel de Montaigne with his well-known essais , literary attempts of self-examination through an analysis of his own reactions to readings, travels, and experiences in health and illness, peace and war. Yet, Borges's scope is narrower than Montaigne's, as the former displays an intellectual world almost entirely derived from his wide-ranging reading, excluding explicit references to his own life and persona. There are only some occasional departures from the world of books, especially by means of critical comments on the political climate in the Argentina of the 1930s and 40s, when a significant part of the population sympathized with the Fascist regime in Germany. See, for instance, the essays "Anotación al 23 de Agosto de 1944" and "Nuestro pobre individualismo."

A literary plot, an imaginative excursion on a particular etymology, a curious turn of phrase from a neglected masterpiece of a remote culture, an idiosyncratic reminiscence of a historical event, a curious metaphor, an anecdote, all are elements that, acting as catalysts, unexpectedly inspire the author to compose short erudite digressions on essential subjects in the tradition of Western thought: time, death, God, the nature of art, the meaning of history. For example, in the opening essay of Otras inquisiciones, "La Muralla y los libros" ("The Wall and the Books"), Borges first describes how the Emperor Shih Huang Ti ordered both the erection of the "almost infinite wall of China" and the burning of all books prior to him. The essay then becomes an attempt to explore the exact reasons why the writer himself has been moved by this terrible paradox: the fact that the same person could have decreed both the construction of an everlasting monument and the obliteration of the past. Using his standard tools of intuition and conjecture–as he does in other essays of this collection–Borges grows unsatisfied with explanations that are based on a rational conjectural analysis of causes and effects. Unpredictably, he then suggests a theory of the nature of aesthetic emotion based on the assumption, or intuition, that we can be touched by ideas that are still in a state of pure form, by brief images that have not yet revealed their full content. Thus the essay ends in this fashion:

(Music, states of happiness, mythology, faces belabored by time, certain twilights and certain places try to tell us something, or have said something we should not have missed, or are about to say something; this imminence of a revelation which does not occur is, perhaps, the aesthetic phenomenon) (Yates & Irby, 1964: 186).

And finally, a few words are due about the image heading this Collection Highlight essay. The three holes on the gutter of our copy are the vestiges of a former library binding. Fortunately, this provisional binding has preserved the intense red color of the original cover for the last five decades. Conversely, the paper of the text itself is in poor condition, almost brittle and with the yellowish tone characteristic of twentieth-century acidic paper. Whereas early hand-made paper from cotton and linen rags is strong and durable, machine-produced acidic paper contains the seeds of its own destruction. Acid is a by-product of the use of alum-rosin compounds as sizing agents during the manufacturing process. In contact with moisture, the alum-rosin compounds produce sulfuric acid that will eventually destroy the paper. Indeed, an ironic medium for a writer who devoted so many pages to the idea of eternity!

King, John. Sur: A Study of the Argentine Literary Journal and its Role in the Development of a Culture, 1931-1970. Cambridge and New York: Cambridge University Press, 1986.