Our collection highlight is a record of Chambers's designs of more than 20 building structures built at Kew Gardens between 1757 and 1762. 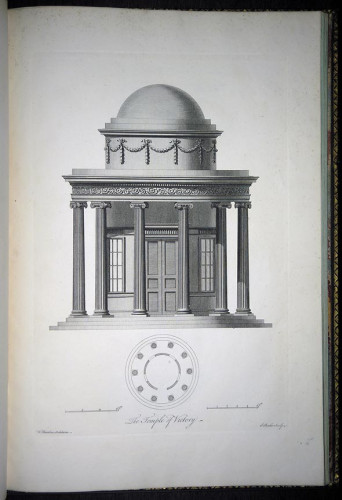 Sir William Chambers (1722-1796)
Plans, Elevations, Sections, and Perspective Views of the Gardens and Buildings at Kew in Surry the Seat of Her Royal Highness The Princess Dowager of Wales. By William Chambers. London: John Haberkorn for the Author, 1763.

Our selection for this month is a magnificent large folio (53 x 37cm) containing 43 leaves of copperplate illustrations, some of which are double-page folded plates. These engravings are a faithful reproduction of architectural drawings by the famous Swedish architect Sir William Chambers (1722-1796). In 1757, Chambers was appointed architect to the Princess Augusta at Kew, Surrey, and tutor in architecture to George, Prince of Wales: his professional duties consisted of teaching three mornings a week, the remaining time being spent in the design of the buildings at Kew.

Chambers's pedagogical endeavors would be materialized in an architecture handbook: A Treatise on Civil Architecture, in which The Principles of that Art are Laid down and Illustrated by a Great Number of Plates (By William Chambers. London: John Haberkorn for the Author, 1759). Likewise, an important part of his work as architect to the Royal Highnesses was compiled in our title featured this month, Plans, Elevations, Sections, and Perspective Views, which is essentially a record of Chambers's designs of more than 20 building structures built at Kew Gardens between 1757 and 1762. As it happened with A Treatise on Civil Architecture, it was commissioned and financed by George III.

Our volume is bound in contemporary mottled calf-the irregular pattern of the design is the result of staining both covers with flecks of ferrous sulfate-with decorations in the form of gold- tooling on the spine as well as on the corners of the covers. 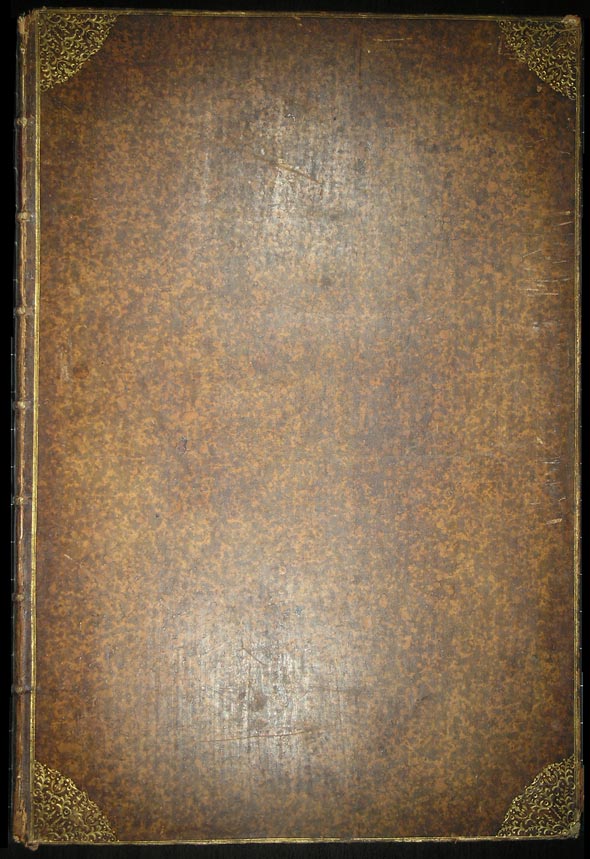 Prior to the appearance of A Treatise on Civil Architecture (1759), Chambers had already recognized the need to advance his career through publication. By enrolling 164 subscribers-many of them were English aristocrats whom Chambers had met in Rome on their Grand Tour in 1750-1752-, he himself published an architecture treatise lavishly illustrated: Designs of Chinese Buildings, Furniture, Dresses, Machines, and Utensils (London: William Chambers, 1757). This book reflects Chambers's great familiarity with Chinese architecture, knowledge that he had acquired during three trips to China with the Swedish East India Company between 1740 and 1749. However, it is ironic that he never applied the authoritative drawings of this treatise to the "Chinese" architectural designs of Kew Gardens. Actually, in the 1740s the fashion for Chinese architecture and design in England was not based on first-hand examination of the original sites but on a mixture made up from a number of eclectic decorative sources. Only in the years following Chambers's death in 1796 did Designs of Chinese Buildings become in England an authoritative guide for Chinese decoration-conversely, the impact of the book's plates was significant in Germany and France through the second half of the eighteenth century.

English readers better assimilated Chambers's essay "On the Art of Laying out Gardens among the Chinese". Reprinted in several prestigious publications such as The Gentleman's Magazine, the ideas of this influential article were applied to the garden designs at Kew. In general, Chambers highly praises Chinese gardens because they represent a perfect synthesis between nature and art. In other words, the designer or artist, explains Chambers, tries to imitate the different aspects of the natural world through artifice:

"The gardens, says he, which I saw in China, were small; nevertheless, from them, and what could be gathered from Lopqua, a celebrated Chinese painter, with whom I had several conversations on the subject of gardening, I think I have acquired sufficient knowledge of their notions on this head." (Chambers, 1757: 216.

"The Chinese gardens, like the European painters, collect from nature the most pleasing objects, which they endeavor to combine in such a manner, as not only to appear to the best advantage separately, but likewise to unite in forming an elegant and striking whole." (Chambers, 1757:216-7) 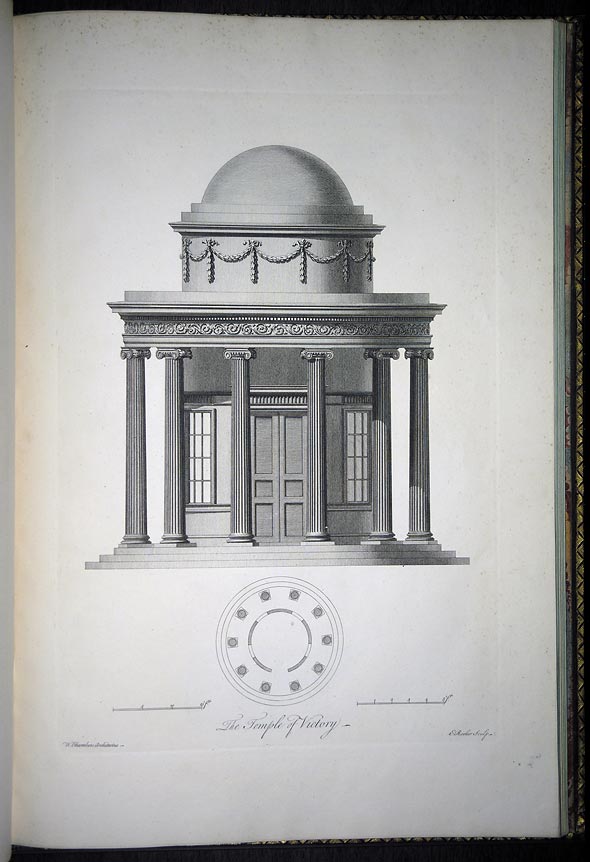 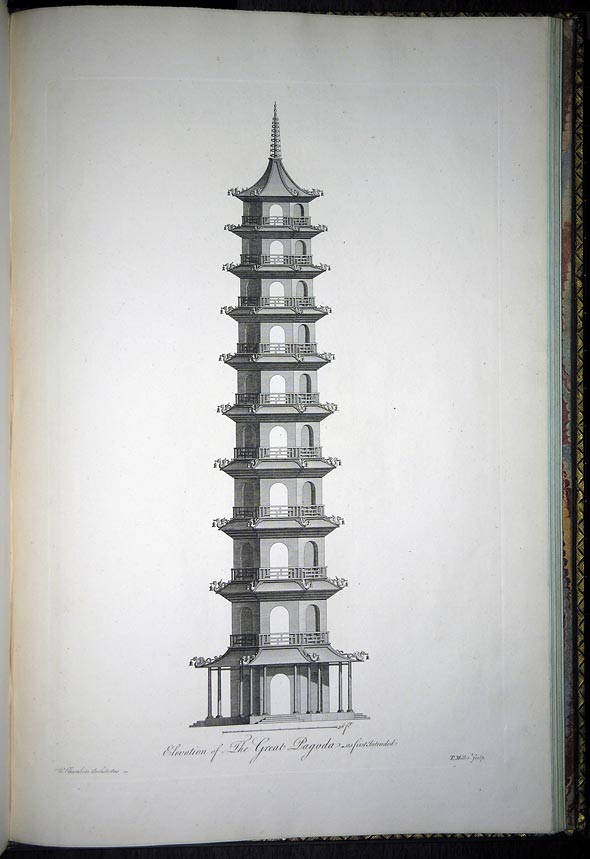 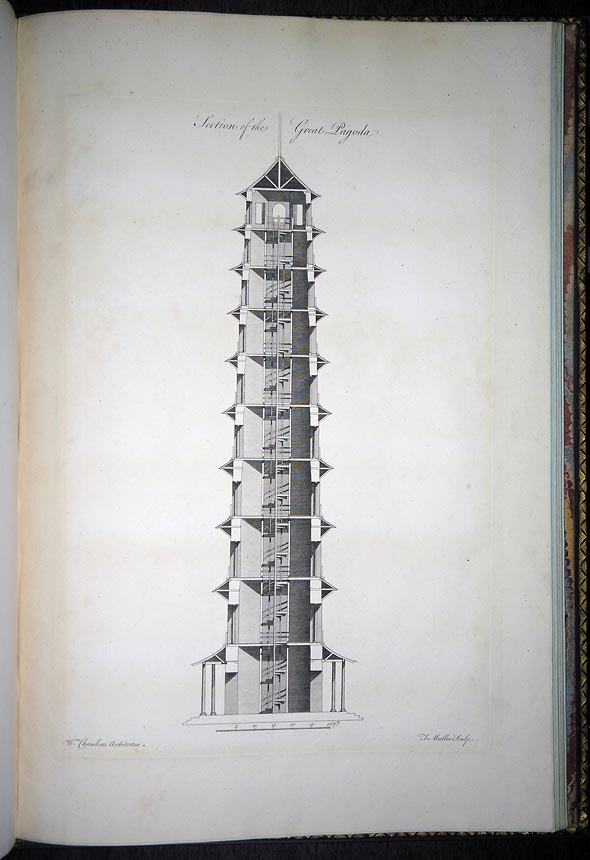 This book is part of the library of Elizabeth G. Holahan (1903-2002). For another interesting title on garden architecture in the Holahan Collection, see Collection Highlight: Langley, Principles of Gardening.