Collection Highlight: Chatterton's Poems, Supposed to Have Been Written at Bristol

For more than 2,500 years literary forgeries have been a common feature in the western intellectual tradition. 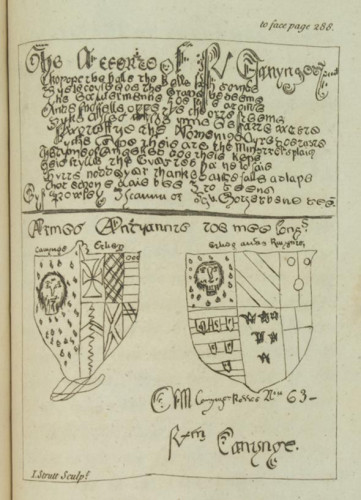 Thomas Chatterton (1752-1770).
Poems, Supposed to Have Been Written at Bristol, by Thomas Rowley, and Others, in the Fifteenth Century. London: T. Payne and Son, 1778.

For more than 2,500 years literary forgeries have been a common feature in the western intellectual tradition. For instance, in the fourth century B.C. the former stoic philosopher Dionysius "the Renegade" forged a tragedy, the Parthenopaeus, and attributed it to Sophocles. When Heraclides of Pontus accepted the play as genuine, Dionysius in turn revealed his own authorship by arguing that the work actually contained an acrostic: the first letters of the verses spelled out a burlesque attack against Heraclides! (Hicks, 1961: 5. 92-3; Grafton, 1990: 3-4). However, other forgers waited centuries before their clever games were unveiled. Behind the alleged six historians of the Historia Augusta hid a fourth-century author who single-handedly fabricated a collection of biographies of Roman emperors, Caesars, and usurpers from 117 A.D. to 284 A.D. These accounts often sound fantastic in their knowledge of intimate details, and the authors claim to have employed literary sources and documents, only a few of which are extant. It was only in the seventeenth century when the French humanist Isaac Casaubon (1559-1614) first challenged the authorship of this work by concluding that, due to the uniformity of the style, a single individual must have written these texts as they were transmitted: Historiae avgvstae scriptores sex. Aelius Spartianus, Iulius Capitolinus, Aelius Lampridius, Vulcatius Gallicanus, Trebellius Pollio, & Flauius Vopiscus. Isaacus Casavbonvs ex vett. libris recensuit: Idemque librum adiecit emedationvm ac notarvm (Paris: Ambrosius & Hieronymus Drovart, 1603) (Grafton, 1990: 80).

The motives of literary forgeries are various. As shown above, they can be clever intellectual hoaxes strictly designed to fool, or even humiliate, their victims. Other forgeries are meant to pursue more ambitious cultural goals in order to add intellectual prestige to the past of a particular nation or ethnic group. A good example of this type of fabrication is the Letter of Aristeas, a long work of prose, possibly written in the second century B.C., and aimed to describe the "historic" details of how the Greek Old Testament or Septuagint was composed. According to this document, Demetrius of Phalerum, the librarian of Ptolemy Philadelphus, who ruled Egypt in the first part of the third century B.C., wrote a letter to his King to arrange the Greek translation of the "Book of the Laws of the Jews" following the high standards of Alexandrian scholarship. Then, Demetrius was allowed to request from the high priest Eleazar to send six scholars from each of the twelve tribes to prepare an official translation. The Letter also describes the enlightening philosophical meaning of the Jewish ritual code, concluding with the declaration that the Jews of Alexandria accepted this translation. Therefore, besides arguing that the Greek Bible of Alexandria was more scholarly than the Hebrew Bible of Palestine, this document attempted to explain the complexities of Jewish ritual law to non-Jewish readers. Unfortunately for the author or authors of this forgery, the Dutch philologist and historian Joseph Justus Scaliger (1540-1609) detected the letter's chronological inconsistencies (Grafton, 1990: 15-17; Bartlett, 1985: 11-34).

Furthermore, there have been writers who forged literary works as a means to advance their own career, as was the case of the eighteenth-century English poet Thomas Chatterton. In the muniment room of St. Mary Redcliff Church, Bristol, Chatterton found two boxes containing medieval manuscripts that once belonged to his father. The discovery of these manuscripts provided Chatterton with the main inspiration, and even with a suitable model, to compose "medieval poetry". In fact, he created an entire fictional fifteenth-century world around an imaginary monk and author, Thomas Rowley, who, according to Chatterton, was at different times a priest, a poet, and an antiquarian. Moreover, he added the real historical figure of William Canynge, five-time mayor of Bristol, whom Rowley supposedly served as a biographer and literary agent. But this intelligent plan would not have initially succeeded without careful research. Chatterton examined medieval manuscripts not only from St. Mary Redcliff Church but also from local libraries and bookstores in order to create a fifteenth-century hand. He consulted medieval glossaries and etymological dictionaries to fabricate what he erroneously thought was a version of fifteenth-century English—his medieval vocabulary included some 1,800 words. More dramatically, he did not hesitate to manufacture manuscripts that looked old by rubbing the parchment with dirt or dying it with tea. If he didn't produce a manuscript, he simply claimed that the poems in question had been copied from an original version that existed elsewhere (Grafton, 1990: 50-3; Rosenblum, 2000: 57-105).

In 1777, the philologist and literary critic Thomas Tyrwhitt (1730-1786) brought out the first edition of Rowley poems, and two more editions were published over the following year. If Tyrwhitt originally thought the poems to be authentic, in the third edition, of which our Collection Highlight is a copy, he added an appendix explaining that these compositions were actually modern, as the title page announced: "To which is added an Appendix, containing some Observations upon the Language of these Poems; tending to prove that they were written, not by any ancient author, but entirely by Thomas Chatterton." 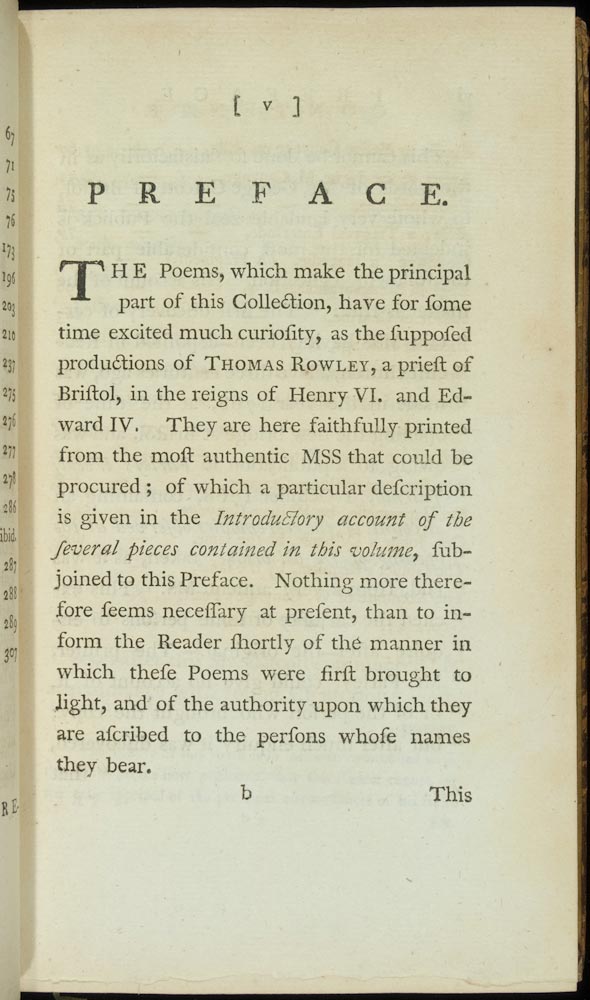 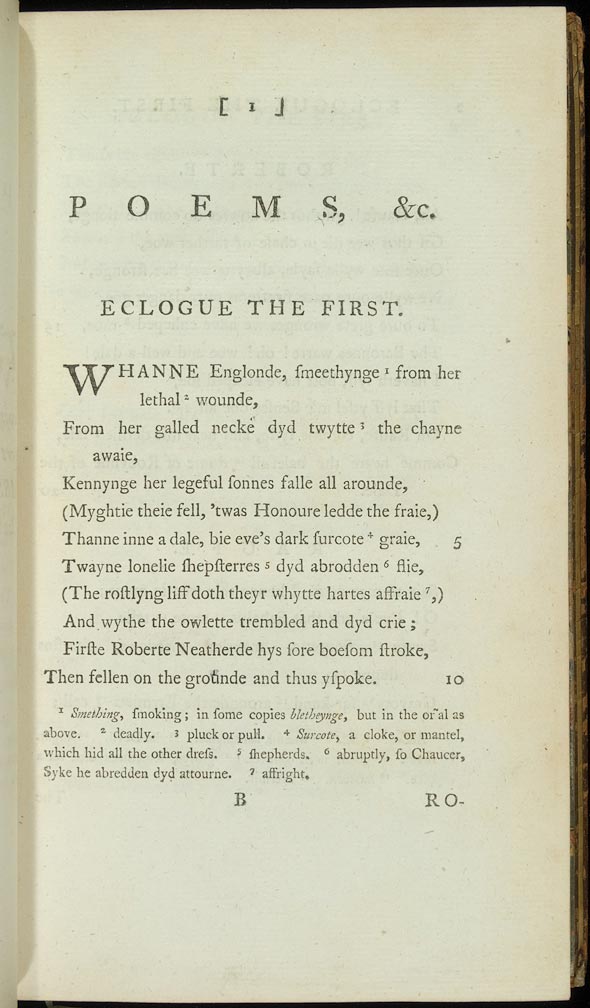 By all means, Tyrwhitt inserted all the customary tools of a scholarly edition. A general preface describing how the "original manuscripts" were brought to light is followed by a more detailed account for each of the pieces. Then, the poems themselves include footnotes that translate difficult terms. These glosses, clarifies the editor, were copied from manuscripts in the handwriting of Thomas Chatterton. 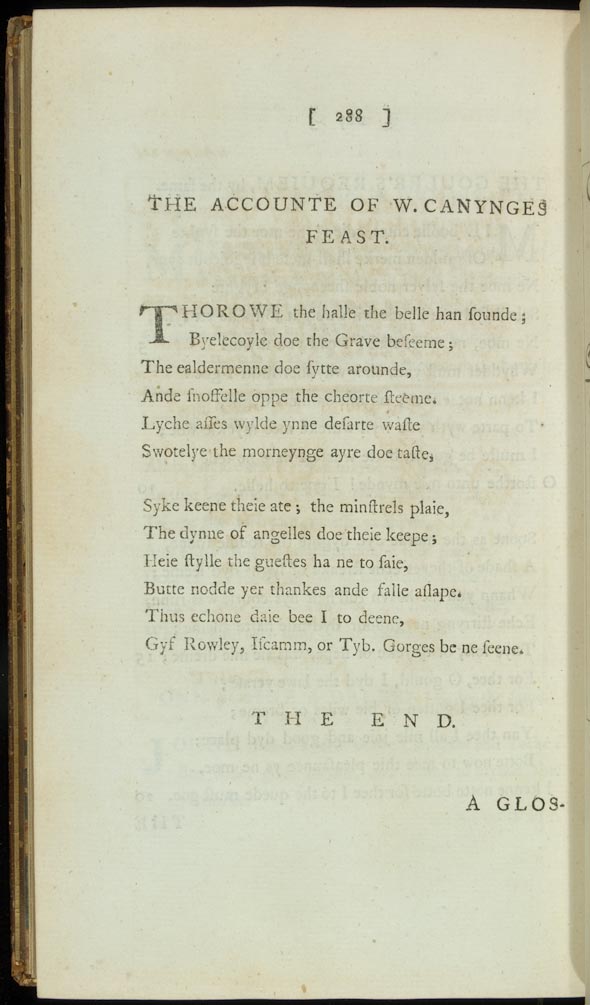 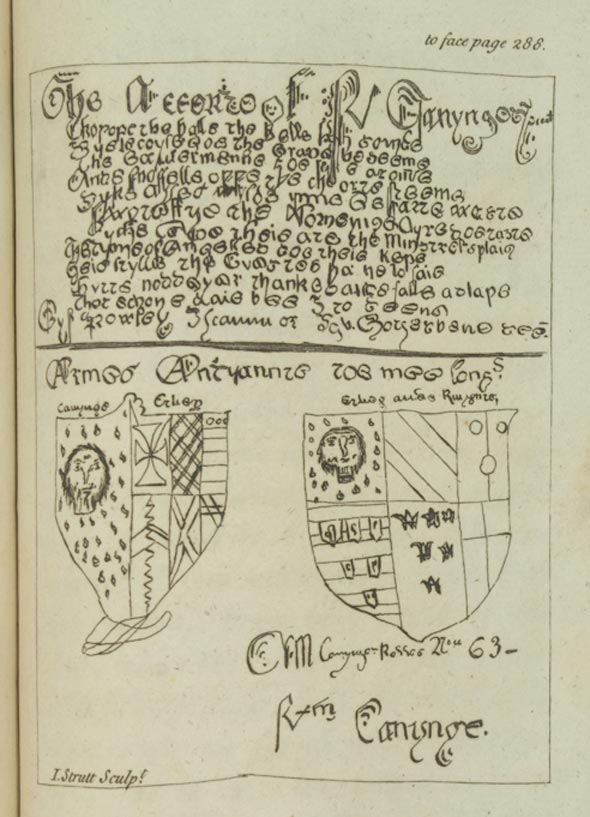 Facing page 288 is an engraving reproducing one of the parchment manuscripts Chatterton forged. Supposedly, it contained a poem written by William Canynge, who was assigned the role of Rowley's patron. Finally, the reader would find a glossary listing not only Chatterton's footnotes but also new ones added by the editor.

Despite the serious doubts cast in Tyrwhitt's appendix, many scholars still accepted the poems as being written by Rowley and others of his contemporaries. For example, in 1781 Jacob Bryant (bap. 1717- d. 1804) supported their antiquity in Observations upon the Poems of Thomas Rowley: in which the authenticity of those poems is ascertained (London: T. Payne and Son, 1781), and in 1782 Jeremiah Milles (1714-1784), Dean of Exeter and president of the Society of Antiquities also defended Rowley's authorship in Poems, supposed to have been written at Bristol, in the fifteenth century, by Thomas Rowley, priest, &c., with a commentary, in which the antiquity of them is considered, and defended (London: T. Payne, and Son, 1782).