This seventh edition of Chaucer’s complete works to a great extent reproduces the one that the scholar Thomas Speght (d.1621) had originally published 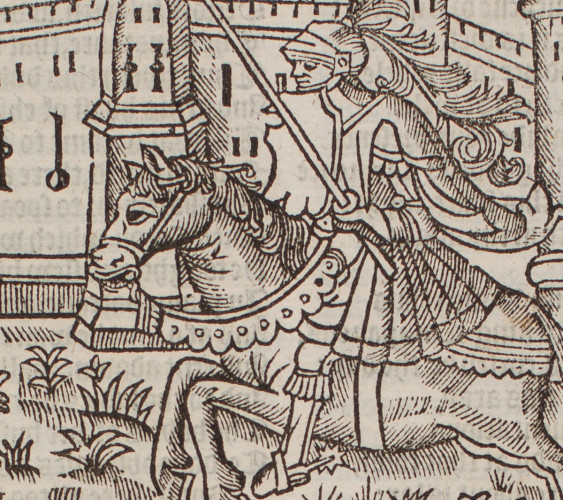 Geoffrey Chaucer (c. 1340-1400).
The workes of our ancient and learned English poet, Geffrey Chaucer, newly printed. To that which was done in the former impression, thus much is now added. 1 In the life of Chaucer many things inserted. 2 The whole worke by old copies reformed. 3 Sentences and Prouerbes noted. 4 The Signification of the old and obscure words prooued: also Caracters shewing from what Tongue or Dialect they be deriued. 5 The Latine and French, not Englished by Chaucer, translated. 6 The treatise called Iacke Vpland, against Friers: and Chaucers A.B.C. called La priere de nostre Dame, at this impression added. London: Adam Islip, 1602.

This seventh edition of Chaucer’s complete works to a great extent reproduces the one that the scholar Thomas Speght (d.1621) had originally published in 1598 (STC (2nd ed.) 5077; Pforzheimer 177). Some of Speght’s major editorial contributions are the inclusion of a detailed biography of Chaucer as well as an extensive glossary, “The Old and Obscure Words in Chaucer explained, whereof either by Nature or Derivation.” The 1602 edition adds the first printed version of A.B.C. called La priere de nostre dame (STC (2nd ed. 5080; Pforzheimer 178). Furthermore, a new edition of Chaucer’s works was published in 1687, the last to be printed in the Gothic typeface (Wing (2nd ed.) C3736; Pforzheimer 179). In fact, the 1687 version is a re-print of the 1602 edition except for the recently discovered conclusions of the Cook’s and Squire’s Tales.

Of great interest is the frontispiece containing the portrait and genealogy of Geoffrey Chaucer (in other copies of this edition, the location of this portrait greatly varies within the prefatory pages). At the head of the engraving is the title on a scroll, “The Progenei of Geffrey Chaucer.” In the central panel the poet stands slightly turned to the left, with a hood falling on his left shoulder; with his right hand he holds at his breast a pen-case or penner, which hangs from his neck, and a rosary with his left hand; the right and left sections of the engraving are covered with numerous coats of arms. In a compartment under the figure of the poet we read: “The true portraiture of GEFFREY CHAUCER, the famous English Poet as by THOMAS OCCLEUE is described who lived in his time and was his Scholar.” At the foot of the portrait is the tomb of Thomas Chaucer (c.1367-1434), son of the poet, and his wife Maud Burghersh. Inscribed with a Latin epitaph, the monument is decorated with twenty coats of arms. 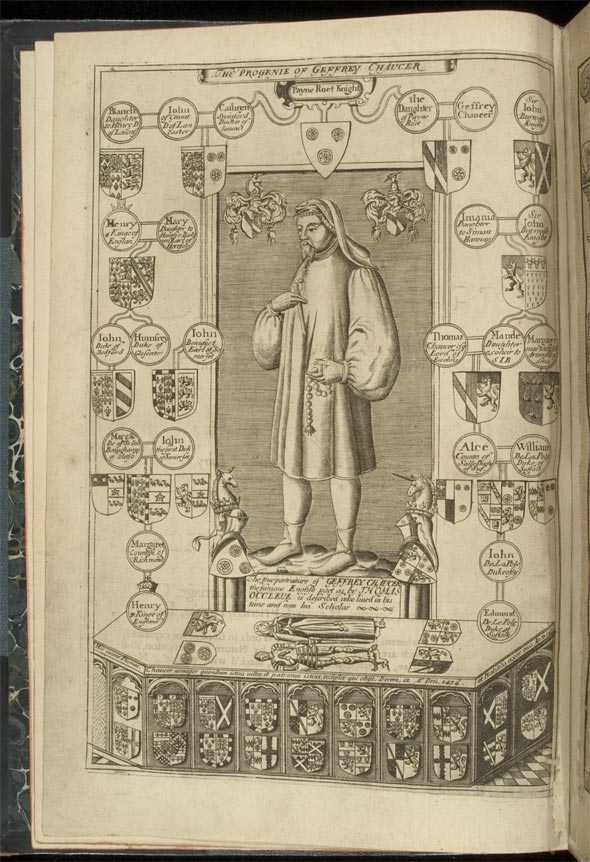 This frontispiece is an exact copy of a copperplate engraving designed by the map-designer, historian, and genealogist, John Speed (c.1552-1629) for the 1598 edition. Trained as a tailor and active as such for many years (he was admitted as Freeman of the Company of Merchant Taylors in 1556), Speed climbed the social ladder by becoming a member of the influential Society of Antiquaries. There he met scholars and collectors such as William Camden (1551-1623), Sir Robert Bruce Cotton (1571-1631), and William Smith (c.1550-1618), eventually obtaining the position of court cartographer (Hind, 1956: 2.67-8). This intellectual network proved to be essential to launch his career as a scholar, resulting in the publication of a series of books on British history and geography. Reflecting the nationalistic spirit of those years, his most important works perhaps are: The History of Great Britaine under the Conquests of ye Romans, Saxons, Danes and Normans. Their Originals, Manners, Warres, Coines & Seales: with ye Successions, Lives, Acts & Issues of the English Monarchs from Iulius Caesar, to our most gracious soueraigne King James. London: [William Hale and John Beale], 1611; and The Theatre of the Empire of Great Britaine. Presenting an Exact Geography of the Kingdomes of England, Scotland, Ireland, and the Iles adioyning: with the Shires, Hundreds, Cities and Shire-towns, within ye Kingdome of England, divided and described by Iohn Speed. London: [William Hall], 1611-1612. In them Speed displays his great ability in drawing maps and, particularly, complex genealogies similar to the one he designed for the portrait of Chaucer.

While this portrait of the poet often includes Speed’s initials (“IS”) on the white tile located on the inner borderline nearest the right side of the tomb, many issues of the 1602 and 1687 editions show a second state of the image that lacks this signature, as it occurs in our copy (Hind, 1952:1.287-8). In any case, Speght refers to both the authorship and the provenance of the portrait in his introductory section, “Chaucer’s Life,” under the heading “His Books,” as follows:

"Thomas Occleue of the office of the priuie Seale, sometime Chaucers scholler. The which Occleue for the loue he bare to his maister, caused his picture to bee truly drawne in his booke De Regimine Principis, dedicated to Henry the fift: the which I have seene, and according to the which this in the beginning of this booke was done by M. Spede, who hath annexed thereto all such cotes of Armes, as any way concerne the Chaucers, as hee found them (travailing for that purpose) at Ewelme and at Wickham."

Though the layout of the engraving demonstrates that Speed visited Ewelme church, outside Oxford, where he copied the tomb of Thomas Chaucer and his wife, it is not clear that Speed based his portrait entirely on the miniature drawn in the margin of a fifteenth-century manuscript containing De Regimine principum by Thomas Hoccleve (c.1367-1426) (British Library, MS Harley 4866, f.88r; the manuscript was written in 1411-12). The fact that in none of the extant medieval portraits does Chaucer hold the penner as he does in the Speed figure suggests that the artist was probably inspired by other models. The best candidate is a full-length full-page portrait on a single leaf of vellum, with a biography of the poet on the reverse, from the mid- to late sixteenth century (British Library, MS Additional 5141) (Hind, 1952: 1.289). In this representation Chaucer holds the rosary in his left hand and, more importantly, the right hand is turned inward to finger the penner on his breast. According to Derek Pearsall, this is a gesture conventionally used to show professional status in Renaissance portraits. Moreover, Pearsall notes that the pointing hand in the old preacher-like tradition, or pointing to the text, like in the Hoccleve manuscript, were irrelevant gestures in the context of sixteenth-century iconography (Pearsall, 1992: 295). 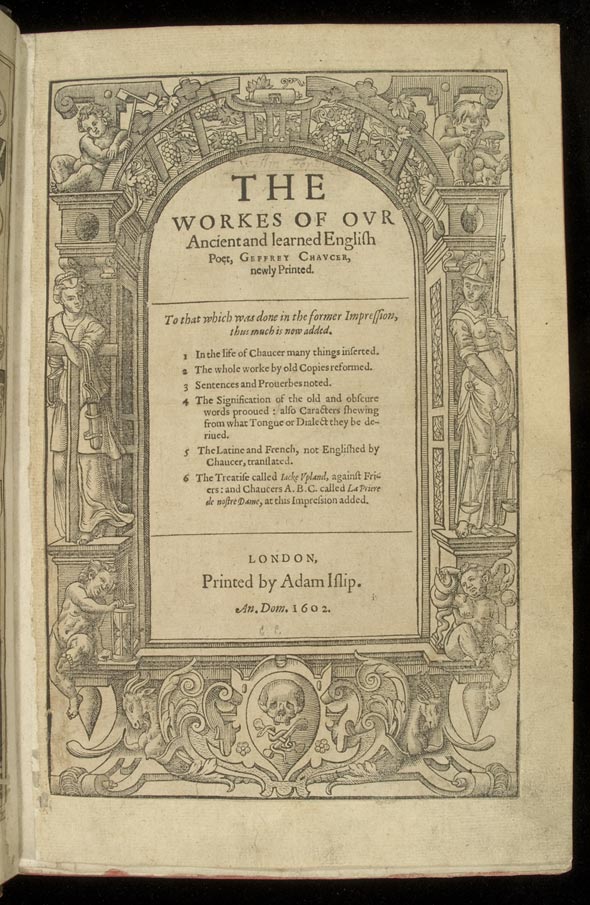 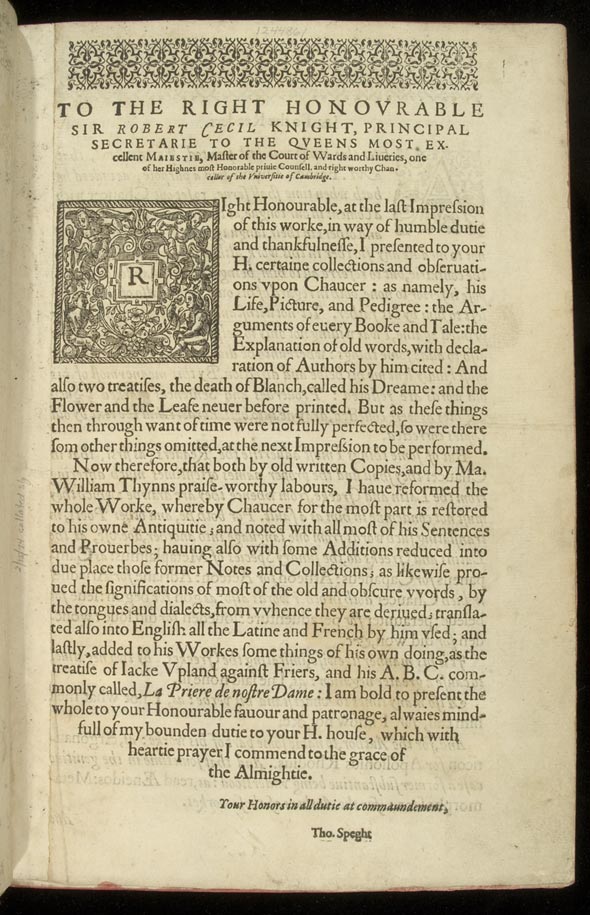 The heraldist and antiquarian Francis Thynne (1545?-1608), son of the earlier Chaucer editor William Thynne (d.1546), strongly criticized the 1598 edition in hisAnimaduersions vppon the Annotacions and Corrections of some imperfections of impressions of Chaucers workes (sett downe before tyme, and nowe) reprinted in the year of oure lorde 1598; Sett downe by Francis Thynne (formerly held in the Bridgewater Library, Thynne’s manuscript is now part of the Ellesmere Collection at the Huntington Library: Guide to British Historical Manuscripts, 30). Thus, in the edition of 1602 Speght incorporates many of Thynne’s suggestions, as he openly anticipates in the preface to the reader:

"Yet notwithstanding, Chaucer now being printed againe, I was willing not only to helpe some imperfections, but also to adde some things: whereunto he did no only persuade me, but most kindly lent me his helpe and direction. By this meanes most of his old words are restored: Prouerbes and Sentences marked: Such Notes as were collected, drawne into better order: And the text by old Copies corrected.”

For instance, Thynne disagrees with some of Speght’s conclusions on the parentage of Chaucer:

"Vnder the title of Chaucers countrye, yow sett downe that some Heraldes are of opynyone that he did not discende “of any great howse; which they gather by his armes.” This ys a slender coniecture; for, as honorable howses, and of as greate Antiquytye, haue borne as meane armes as Chaucer; and yet Chaucers armes are not so meane, eyther for coolour, Chardge or particione as some will make them ." (Kingsley, 1965: 14-15)

In the image shown below, the reader will easily identify Thynne’s critical words: in the 1602 edition, they have been aptly added in italic typeface and enclosed in a frame! 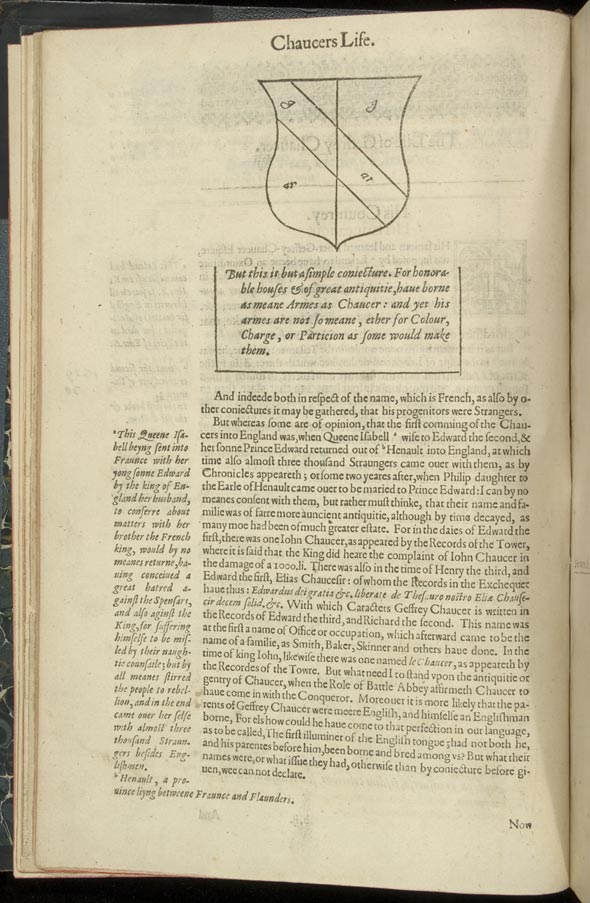 We have some information about Adam Islip, the printer of the sixth and seventh editions of Chaucer’s works. His entry in the Stationers’ Register on the 20th of December of 1594 reads as follows:

Entred to him for his copie to printe for the companye. Chawcers workes, by the consent of the wardens, and also by th[e] appointment of Abell Jeffes to whome this copie was first entred. and yf hereafter there be any Comentary or other thinge written vppon the same booke then the same Adam shall haue the offer of the same, either to take it, or refuse yt…vjd (Arber, 2.667).

An entry from 6 October 1592 clearly indicates that the copyright was originally in the hands of the Company of Stationers. The printer Abel Jeffes had paid sixpence for the rights of Chaucer’s Work, stating that he would print it for the Company:

Consequently, that entry from December 20, 1594, shows that Islip obtained the consent of Jeffes by paying sixpence in the pound to the Company. Islip died in 1639, leaving all his presses and printing material to Richard Hearne. In turn, after Hearne died or retired from business around 1646, Islip’s widow, Susan Islip, succeeded him (Plomer, 1907: 106; McKerrow, 1949: 174). 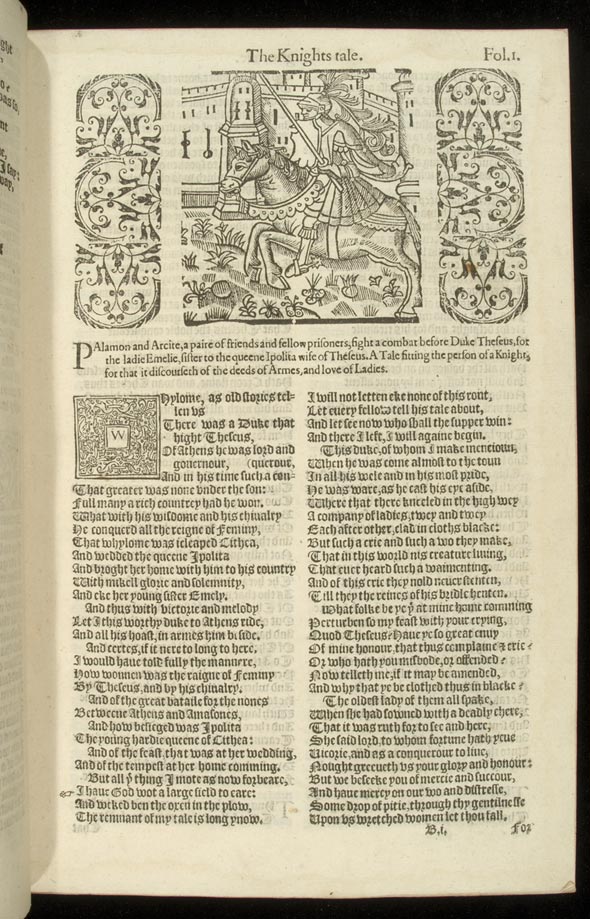 Plomer, Henry R. A Dictionary of the Booksellers and Printers who were at Work in England, Scotland and Ireland from 1641 to 1667. London: The Bibliographical Society, 1907.