Copernicus wrote De revolutionibus at the cathedral in Frauenburg (now Frombork) in the northernmost diocese in Poland. 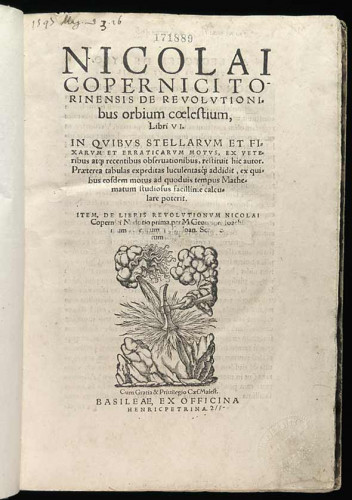 Copernicus wrote De revolutionibus at the cathedral in Frauenburg (now Frombork) in the northernmost diocese in Poland. Being far away from the main European universities and printing shops, it is very unlikely that Copernicus would have seen his astronomical treatise printed except for the active role of Georg Joachim Rheticus, a young professor of astronomy from Lutheran Wittenberg.

In 1538, Rheticus headed south to Nuremberg, where he met Johann Schöner, an expert in astrology and editor of the manuscripts of the most important astronomer of the 1400s, Johannes Regiomontanus. It is plausible that Schöner told Rheticus about the revolutionary ideas of Copernicus, who challenged Ptolemaic astronomy by placing the Sun in the center of the planetary system and throwing the Earth into motion.  Some scholars have suggested that Schöner had previously seen a copy of Copernicus' so-called Commentariolus, a manuscript introduction to his heliocentric system that was available to European scientists at least by 1514.

In 1539 Rheticus traveled to Frauenburg to become Copernicus' only pupil. Copernicus was then 67 years old, and by 1540 gave Rheticus permission to publish theNarratio prima, or the "First Report" on the new heliocentric system. The favorable reception accorded Rheticus' tract convinced Copernicus to allow his young pupil to take to Germany the De revolutionibus for printing. Rheticus decided that this revolutionary work deserved to be published in Nuremberg by Johannes Petreius, the leading scientific printer in northern Europe. 142 woodcuts displaying geometrical diagrams and letter characters were commissioned to illustrate, and clarify, the complexity of Copernicus' thesis. Only six of these woodcuts were used twice. 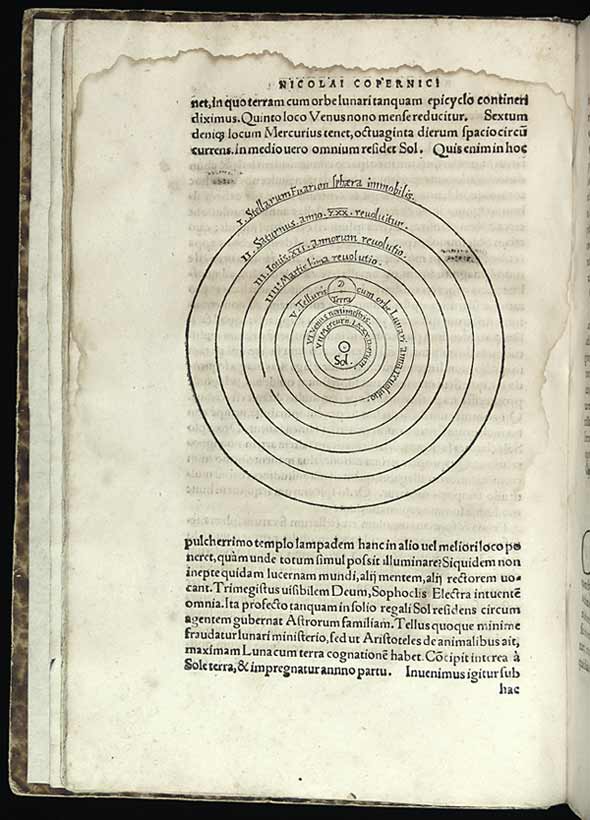 The printing of the work began shortly after the arrival in Nuremberg of Rheticus from Wittenberg in May 1542. Indeed, he was enthusiastically involved in most of the printing process, acting as a proofreader until mid-October, when he left Nuremberg to take up his new position as a professor in Leipzig. Then, proofreading was turned over to Andreas Osiander, pastor of the Sankt Lorenz Kirche in Nuremberg. Printing was finished by 20 April 1543.  Petreius issued an errata leaf for the first 146 folios of the book -- out of a total of 196 folios. The sophisticated character of some of these corrections suggests that Copernicus proofread a great part of the book. Possibly, gatherings of printed leaves were gradually sent to him for inspection. Apparently, Copernicus received the book a month after its publication, the very day on which he died.

Our copy is actually the second edition published by Heinrich Petri in Basle in 1566. The second edition differs from the first in two ways: It includes, between folios 196 and 213, the third edition of Rheticus' Narration prima, and it also contains, at the end of the Index capitulorum, a five-line recommendation from the leading mathematician at Wittenberg, Erasmus Reinhold, extracted from his Tabulae Prutenicae. Otherwise, the second edition is practically a page-by-page reprint of the first edition. Although the second edition corrected some of the more obvious typographical mistakes, it also introduced new ones. Curiously, the second edition failed to address the corrections noted on Petreius' errata sheet.

The copy at the University of Rochester is particularly interesting because it shows different types of censorship as issued by the Church. In the Index librorum prohibitorum of 1557, Pope Paul IV cited the printer Johannes Petreius. Following the council of Trent (1545-1564), the Index included the names of numerous Protestant authors such as Georg Joachim Rheticus and Johann Schöner, the dedicatee of Rheticus' treatise. One can easily see that the title page has the names of Rheticus and Schöner pasted over. Moreover, the entire Narratio prima has been removed from our copy. 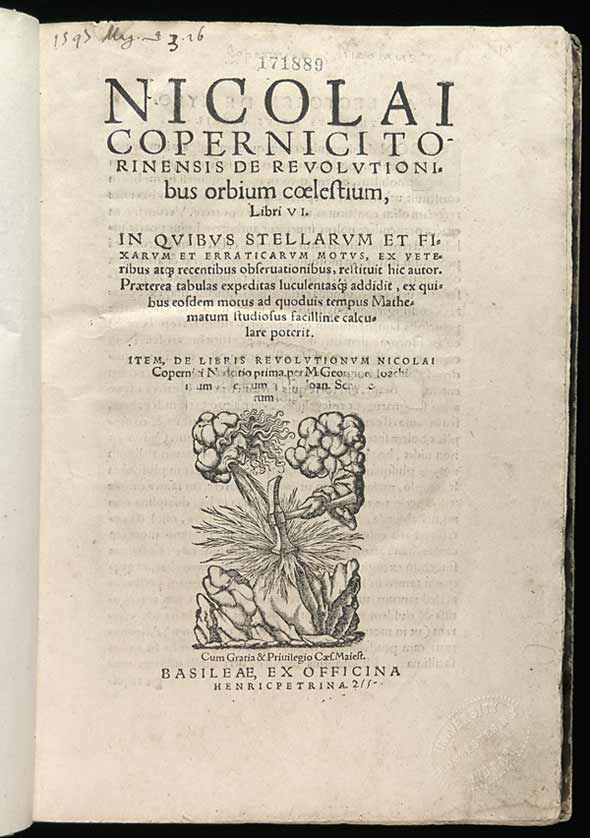 In 1616, the Inquisition placed De revolutionibus on its Index until corrected -- Decree XIV. In 1620, in Decree XXI, the required corrections were officially announced. This is an extraordinary measure since for very few books did the Index specify the type of changes to be made. The ten emendations were designed to make Copernicus' book appear hypothetical and not the description of a real physical work. One may wonder why the Church took 77 years to react against an astronomical treatise whose content seriously challenged the traditionally accepted idea that placed a static earth in the center of the universe. One of the reasons is that numerous scientists only viewed the treatise as a useful manual to calculate planetary positions for any conceivable time, emphasizing, however, the hypothetical character of Copernicus' main thesis. Indeed, the first edition of 1543 included the infamous anonymous foreword, in fact written by Andreas Osiander, containing the following words: "these hypotheses need not to be true nor even probable."

We are going to show some examples of how the recommendations of the Inquisition were faithfully applied in this second edition of the treatise. Passages from the specific recommendations of Decree XXI are provided in translation and in italics. After each recommendation, one can observe how it was reflected in the text itself.

Therefore, with these recommendations, let those who have some diligence approach the judgment of this emendation, which is as follows:

In the preface near the end:

Delete everything from "perhaps" (Si fortasse) to the words, "my work" (hi nostri labores) and adjust it thus, "my work and those of others" (ceterum). 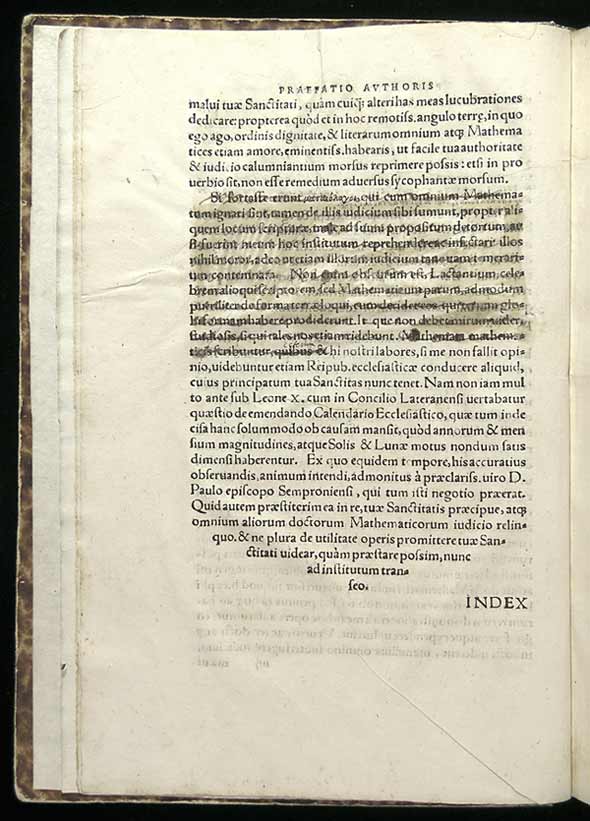 Here we include Professor Edward Rosen's translation of this deleted passage from Copernicus' preface -- a dedication to Pope Paul III:

"Perhaps there will be babblers who claim to be judges of astronomy although completely ignorant of the subject and, badly distorting some passage of Scripture to their purpose, will dare to find fault with my undertaking and censure it. I disregard them even to the extent of despising their criticism as unfounded. For it is not unknown that Lactantius, otherwise an illustrious writer but hardly an astronomer, speaks quite childishly about the Earth's shape, when he mocks those who declared that the Earth has the form of a globe. Hence scholars need not be surprised if any such persons will likewise ridicule me. Astronomy is written for astronomers. To them my work too will seem, unless I am mistaken, to make some contribution also to the Church, at the head of which Your Holiness now stands."

From "Nevertheless, if we examine more carefully," correct it to "Nevertheless, if we were to examine the matter more carefully, it makes no difference whether the earth exists in the middle of the universe, or away from the middle, as long as we judge that the appearances of the heavenly motions are saved. (Si tamen attentius rem cosideremus, nihil refert terram in medio mundi, vel extra medium existere, quoad salvandas caelestium motuum apparentias existimemus).

Here we include the original sentence that has been deleted: (videbitur haec quaestio nondum absoluta, & id circo minime contemnenda): "it will be apparent that this problem has not been solved, and it is by no means to be disregarded." 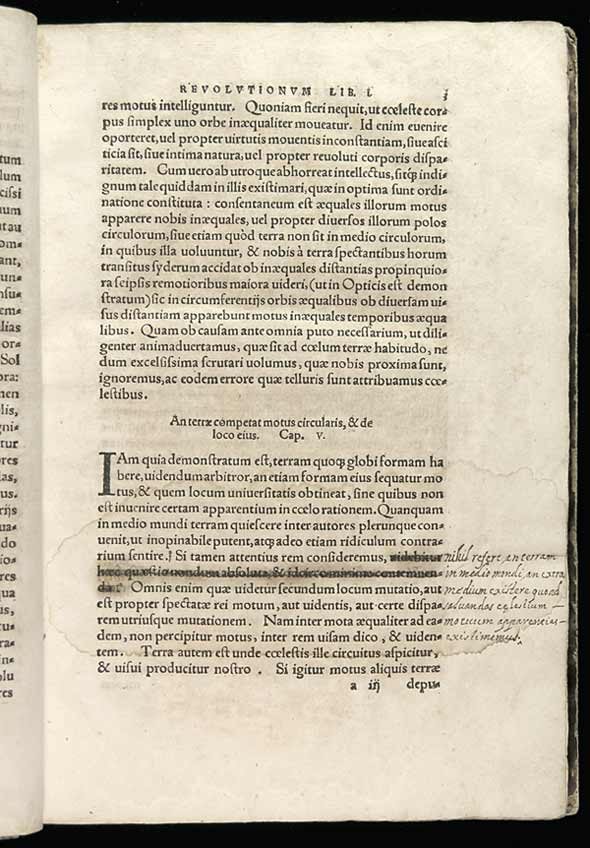 On folio 10, at the end of the chapter, delete these last words: "So vast, without any question, is the divine handiwork of the most excellent Almighty" (Tanta nimirum est divina haec Opt. Max. Fabrica).  Certainly, the Inquisition thought that this passage clearly identified the design of the Creator with the heliocentric system, which is graphically described in the famous woodcut inserted in the previous page of the treatise.

The title of the chapter (De triplici motu telluris demonstratio: On the explication of the three-fold Motion of the Earth) should be adapted in this manner, "On the Hypothesis of the Three-fold Motion of the Earth and its Explication." (De hypothesi triplicis motus telluris eiusque demonstratione). The inscription circa telluris axem is probably a stylistic suggestion to replace the printed version circa axem telluris. Stylistically, a genitive such as telluris is normally placed between the preposition and the noun. Furthermore, we also note that the first edition includes a comma after telluris. One may wonder whether the reader of our copy wished to emphasize, and clarify, thattelluris should only modify axem. 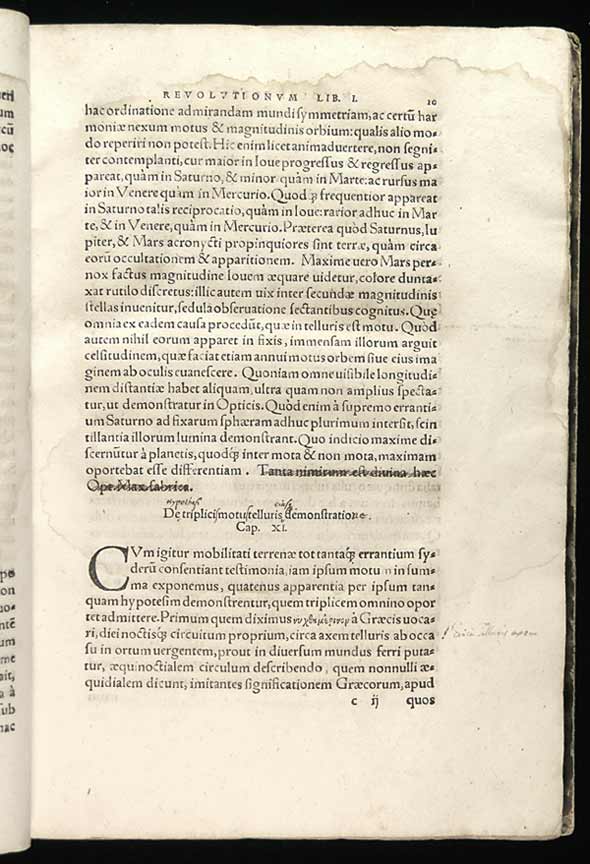 The book is bound in quarter vellum over marble boards. Both the typography of the label and the design of the marbling clearly suggest that this binding was made in a later period, probably in the eighteenth century, or even in the nineteenth century. 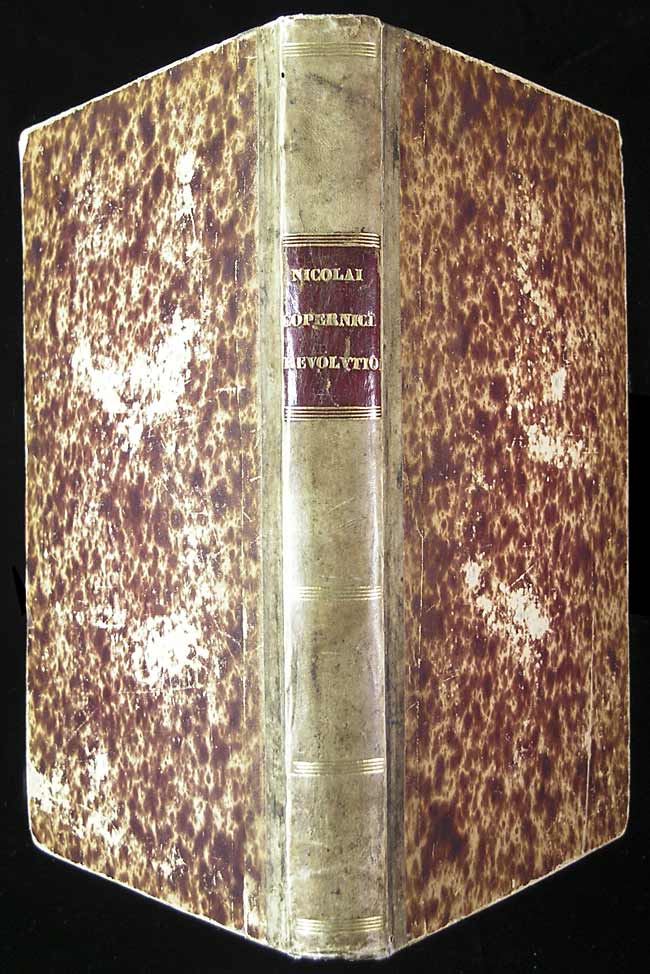 Our copy of De revolutionibus has the abbreviated title inscribed on one of the edges, suggesting that books were often shelved horizontally in the sixteenth century. The binder eventually copied this version of the title to the label of the spine, as one can see in the previous image.

As regards the provenance of our copy, Dr. Ludwik Silberstein purchased it in London 3-19-19. Born in Warsaw, Poland, in 1872, Dr. Silberstein was educated at the Universities of Krakow, Heidelberg, and Berlin, where he obtained a Ph.D. in Mathematical Physics. Beginning in1920, he worked at the research lab of the Eastman Kodak Co., also lecturing on gravitation and relativity at the Universities of Cornell, Toronto, and Chicago. He published numerous monographs on Physics and Optics. He died in 1948.

The University of Rochester paid $50 for the book, which officially was added to the library collection October 1, 1929.