Historians and the participants themselves agree that the conquest of Mexico took place in two well-defined stages. 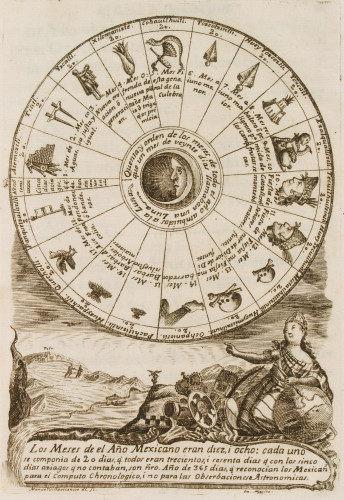 Historians and the participants themselves agree that the conquest of Mexico took place in two well-defined stages. The first phase began with the landfall of the Spanish soldiers in April of 1519, when Hernán Cortés assumed independent command of the Spanish army against the wish of the governor of Cuba, Diego Velázquez, who was in fact the patron of the expedition. With the help of coastal Indians, and with the alliance of the independent province of Tlaxcala, the Spaniards entered the rich city of Cholula and, unprovoked, attacked its population. Oddly, the Spanish soldiers were welcomed into the imperial city of Tenochtitlan, a majestic site of more than 200,000 inhabitants, built on a lake, and connected to the mainland through three large causeways. Next, Cortés ordered the capture of the "Great Speaker" Moctezuma, the emperor of the Mexica, through whom the Spaniards managed to rule the city for six months. Increasingly concerned about the military successes of the rebel Cortés, the governor of Cuba dispatched a large force with the mission to arrest him. However, they were defeated and incorporated into Cortés's own force. Then, the six-month peaceful ruling of Tenochtitlan was interrupted by a native uprising, caused when, in Cortés's absence, the Spanish soldiers massacred unarmed warriors performing ritual dances in a temple. The Spaniards were expelled in mid-1520 and, just before their expulsion, Moctezuma was killed, possibly at the hands of his own subjects. The second phase of the conquest started in 1520 and lasted a little over a year. The Spaniards attacked the smaller lakeside cities, recruiting allies before they placed Tenochtitlan under siege in May of 1521. The city would finally fall in mid-August 1521 (Clendinnen, 1990: 89). 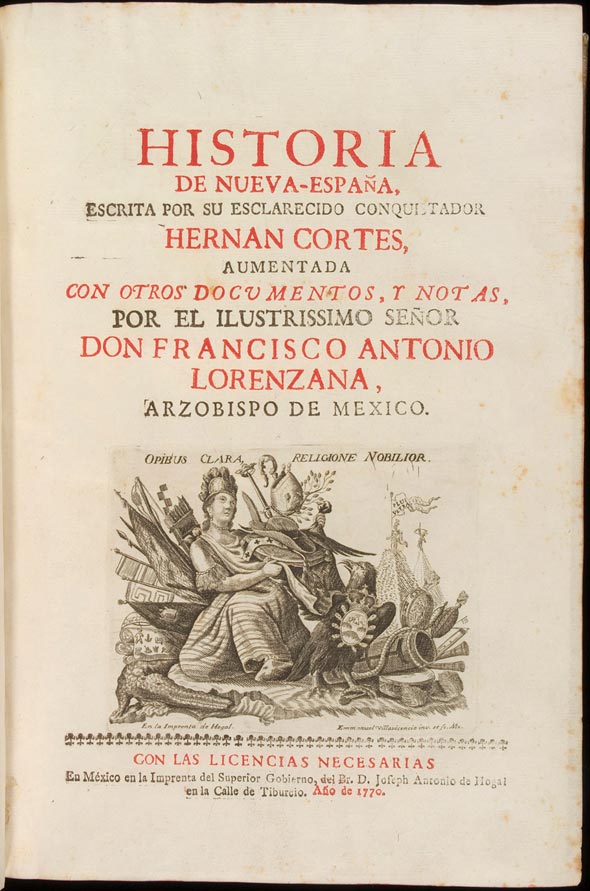 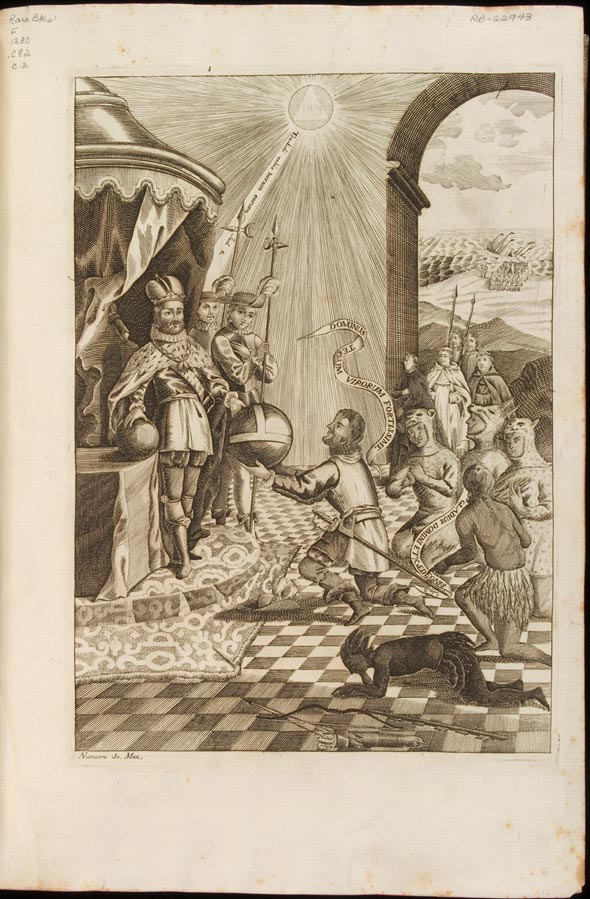 In the course of these events, prior and after the conquest of Tenochtitlan, Hernán Cortés sent a series of letters, "Cartas de Relación", to the king of Spain Carlos I. These letters are reports carefully designed not only to defend Cortés's credentials as a commander and loyal subject, but also to justify his difficult legal position. Cortés was technically in rebellion against the Crown for having rejected the authority of his superior, the governor of Cuba. Consequently, it should not surprise us that these letters are greatly embellished, often fictional, presenting their author as an extraordinary military leader who will eventually win a new empire for Carlos I (Carman, 1997: 113-37). 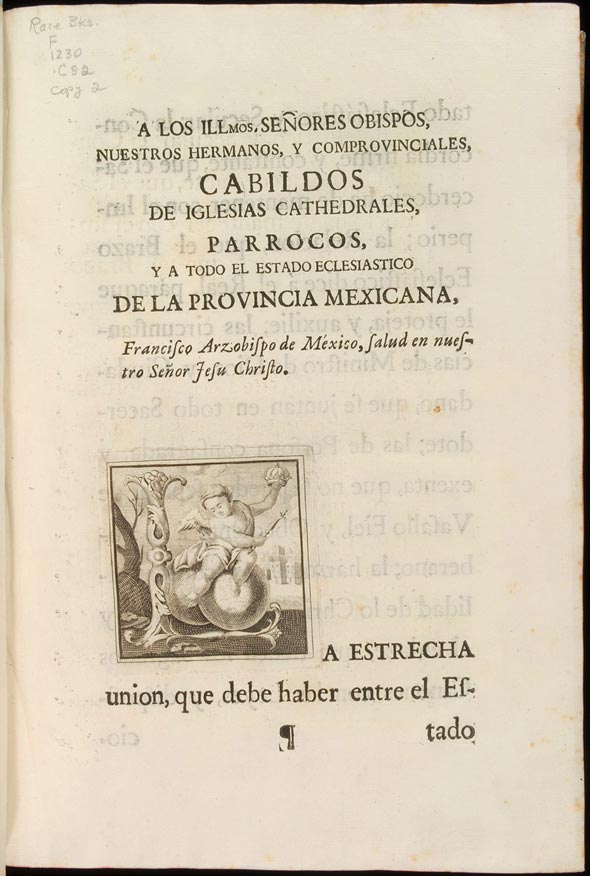 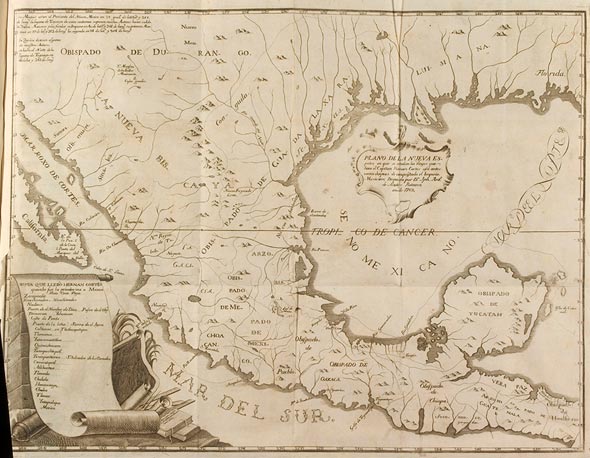 Hernán Cortés's first four letters are included in 2v- 212r of the Codex Vindobonensis S. N. 1600 of the Austrian National Library, Vienna. The Fifth Letter is also inserted in the same manuscript compilation, covering 229r- 287r. The Codex, which also contains other documents, was first discovered in 1777 by the Scottish historian William Robertson. Since Robertson had failed to locate in Spain the letter that Cortés mentions at the beginning of the Second Letter as a "very long and detailed account" (muy larga, y particular Relación), he rightly concluded that the letter in question along with the others might be in Vienna because Carlos I was preparing his trip to Germany at the time when the representatives of Cortés arrived in Spain. Unfortunately, the Codex does not contain the missing letter, but a notarial copy of a different letter, not written by Cortés, and originated from the municipal council of Veracruz (Pagden, 1971: lv-lx). 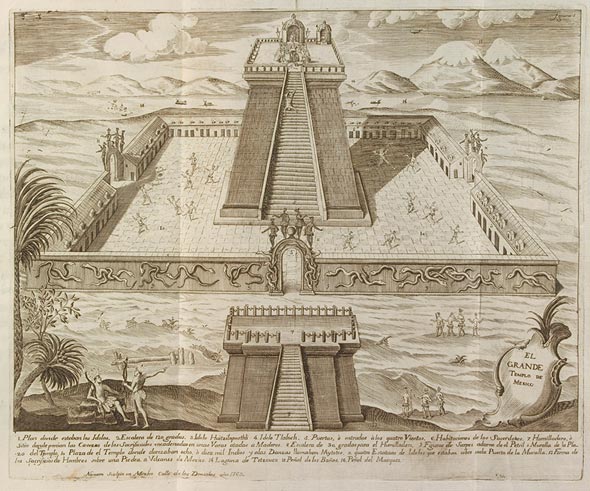 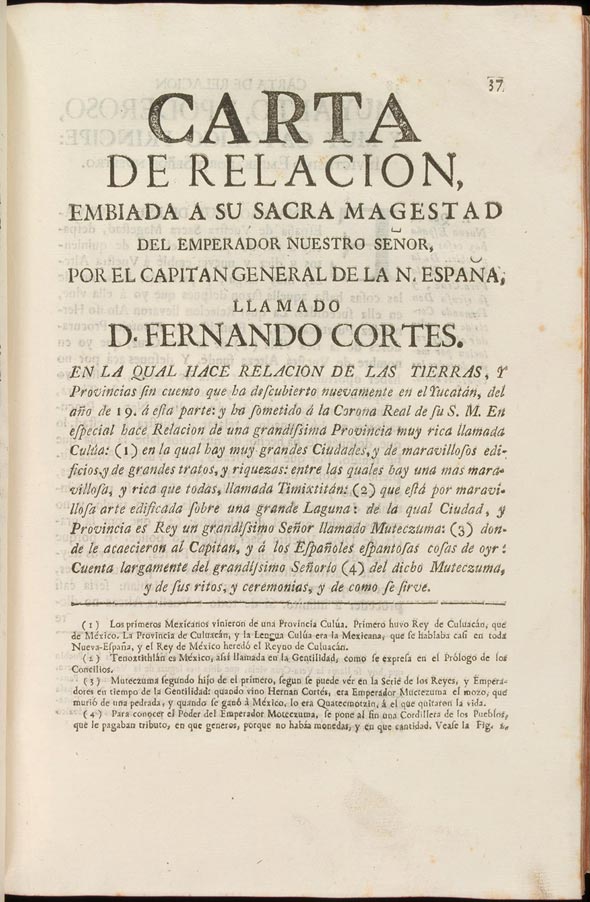 The Second and Third Letters were first printed by Jacobo Cromberger in Seville in 1522 and 1523 respectively (Griffin, 1988: 39-40; 56-63), and the Fourth Letter was first printed in Toledo in 1525. Curiously, the Fifth Letter was discovered only when Robertson unveiled the content of the Codex Vindobonensis in 1777. This letter was first published by Martín Fernández de Navarrete in 1844, in volume 4, pp. 8-167, of Colección de documentos inéditos para la historia de España. 113 vols (Madrid: Academia de la Historia, 1842-1895). The Second, Third, and Fourth Letters were reprinted in volume 1 of Andrés González de Barcia Carballido y Zúñiga's Historiadores primitivos de las Indias Occidentales. 3 vols (Madrid, 1749), and then again in 1770 (Pagden, 1971: lx-lxvii). Our Collection Highlight is a copy of this edition.

The Historia de la Nueva España was edited and published by Cardinal Francisco Antonio de Lorenzana y Buitrón (1722-1804), Archbishop of México (1766-1772), in a luxurious edition printed by José Antonio de Hogal. It was exquisitely illustrated with copperplate engravings, some of them in the form of folding maps (Johnson, 1988: 36-7). The frontispiece showing Cortés symbolically handing the New World to the king Carlos I, the map of New Spain with the journeys Cortés undertook before and after the conquest, the depiction of the El Grande Templo de Mexico, and Domingo del Castillo's map of California, were all engraved by José Mariano Navarro, an engraver and binder working in Mexico City (Donahue-Wallace, 2001: 224-9). Manuel Galicia de Villavicencio designed and engraved the Mexican Calendar and the 31 plates describing the tributes paid to the emperor Moctezuma (Donahue-Wallace, 2001: 231-4). 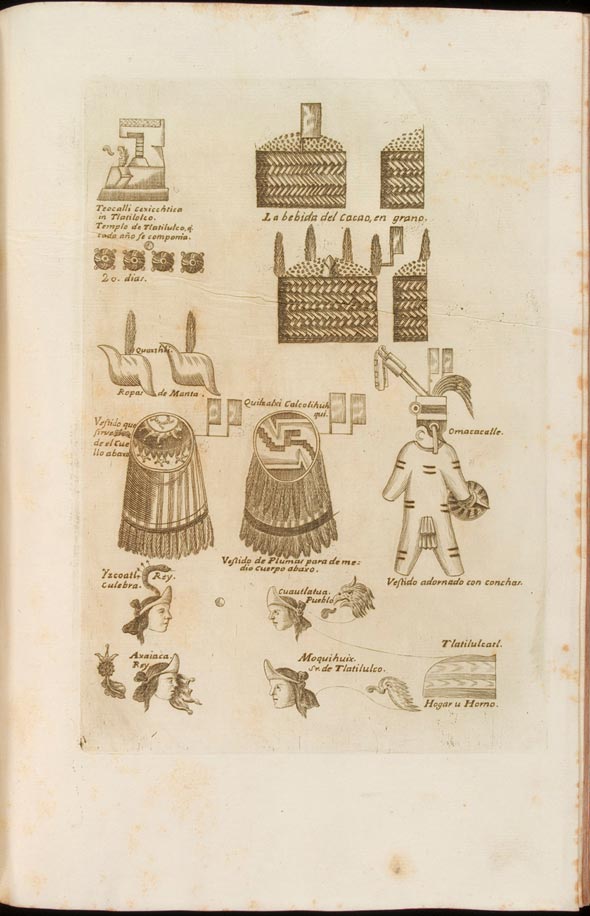 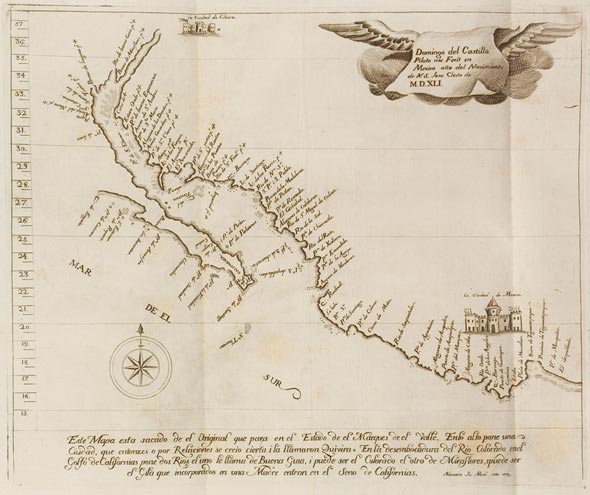 In the Preface, Lorenzana clearly states the reasons for reprinting Cortés's letters. He sees these reports as part of a broader project to write a general history of Spain and the New World, including the use of sources from the history of the Church as well as from contemporary historical works. Indeed, this global approach, along with the balancing act between the old and the new, perfectly match some of the intellectual principles of the Enlightenment. For instance, Lorenzana acknowledges the relevance of Lorenzo Boturini Benaducci's Idea de una nueva historia general de la America Septentrional (Madrid: Juan de Zúñiga, 1746), and his own edition of the Letters include not only his erudite footnotes but also additional historical material that help us contextualize Cortés's reports. Thus, Lorenzana printed the Gobierno político de Nueva España, y Virreynato by the seventeenth-century historian Fray Agustín de Betancourt, and, between the Third and Second Letters, inserted a reproduction of a Mexican manuscript with 31 illustrations of the tribute paid in kind to Moctezuma. As exemplified by the richness of illustrations in the Encyclopédie edited by Diderot and d'Alembert, Enlightenment intellectuals were convinced that no resources should be spared to promote the educative impact of scholarly research (López-Vidriero, 2007: 218-23).

Calvo, Hortensia. "The State of the Discipline: The Politics of Print: The Historiography of the Book in Early Spanish America." Book History (6. 2003): 277-305.

Griffin, Clive. The Crombergers of Seville: The History of a Printing and Merchant Dynasty. Oxford: Clarendon Press, 1988.

Johnson, Julie Greer & Susan L. Newbury. The Book in the Americas: The Role of Books & Printing in the Development of Culture & Society: Catalogue of an Exhibition. Providence: The John Carter Brown Library, 1988.

Todorov, Tzvetan. The Conquest of America: The Question of the Other. Tr. Richard Howard. New York: Harper & Row, 1984.