Francesco Marcolini's courageous decision to print a heavily illustrated edition of La Commedia must be analyzed in the context of other editions. 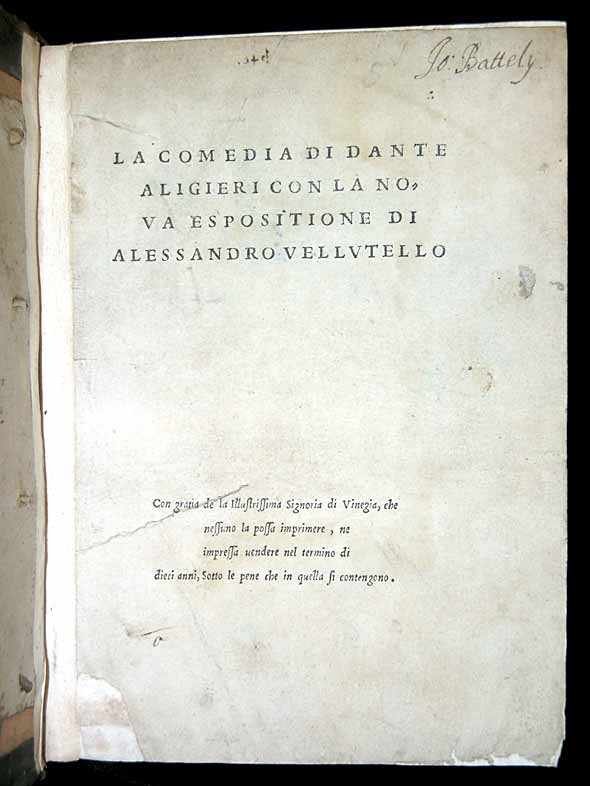 This volume is profusely illustrated with 87 woodcuts, including two repetitions. Three of the woodcuts are full-page illustrations, establishing the beginning of the Inferno,the Purgatorio and the Paradiso. The first ten blocks illustrate Alessandro Vellutello's introduction, which mostly deals with the structure of Dante's Hell. The other illustrations generally depict the cantos as in the fifteenth-century Venetian edition that dictated later representations of the poem: Comento di Christophoro Landino fiorentino sopra la Comedia di Danthe Alighieri poeta fiorentino (Venice: Bernardino Benali & Matthio da Parma, 1491). However, Marcolini's artist departs from the previous iconographic tradition by incorporating woodcuts that illustrate the commentaries themselves.

Dante's Commedia was soon treated as a canonical work deserving the sort of critical apparatus traditionally included in the editions of classical authors, the Scriptures, and the works of the Fathers of the Church. Indeed, within twenty years after Dante's death, there appeared eight commentaries. Although La Commedia was greatly indebted to the classical tradition and the spirit of the age, the poem excelled for its originality, presenting the reader with numerous interpretative challenges: the genre ambiguity created by the selection of the title, the choice of Italian over Latin, the insertion of contemporary figures in an epic narrative, the treatment of pagans, and the poet's sometimes idiosyncratic treatment of religious doctrine. Fourteenth-century commentators made a great effort to turn La Commedia into a canonical authoritative work by clarifying those passages perceived as controversial. This goal was commonly achieved by adding the testimony of previous literary authorities, or by advising the reader to interpret contentious passages allegorically. In the fifteenth and sixteenth centuries, the poem faced different challenges. The concern of readers and commentators was not to make La Commedia authoritative, but to make a poem deeply rooted in medieval thought relevant to the culture of early modern Europe. Consequently, the glosses began to reflect not only the intellectual background of the commentator, but also the political environment in which he lived. For instance, Dante's strong criticism of certain Florentine families could be easily used to echo the political rivalries between Italian cities in the sixteenth century. Additionally, through the first two centuries of printing history, publishers introduced numerous technical innovations to accommodate the new ways in which the poem was being interpreted. Important choices had to be made such as the selection of an adequate typography and format (folio, quarto, or octavo), the insertion of a lengthy commentary, and the design of illustrations. 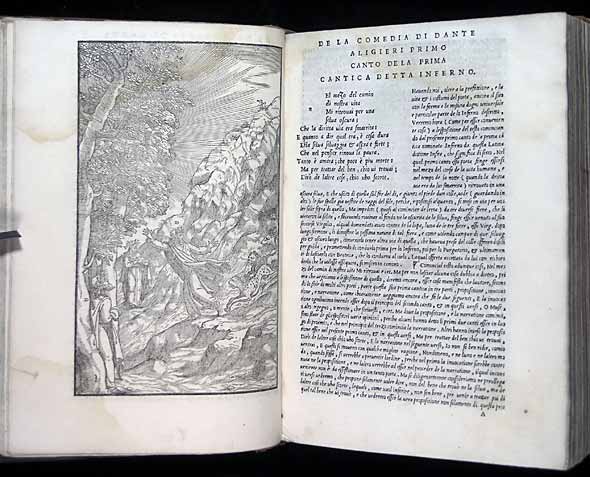 In the image included above, the viewer can appreciate how the text of La Commedia is overwhelmingly embraced by a dense commentary. The tradition of this critical apparatus can be traced back to the fourth-century grammarians Donatus and Servius, who wrote a line-by-line analysis -- sometimes a word-by-word explanation -- of Vergil's works. In the middle ages, this type of commentary was applied to canonical works, reaching a high degree of complexity as subsequent commentators were included. Exposed to this accumulated knowledge, the medieval reader was often given the opportunity to choose between several interpretations. Through this essay we will see that whereas Vellutello's commentary on La Comedia is formally rooted in the medieval scholastic tradition, it also contains certain features that make it modern, particularly his bold criticism of the previous scholarly tradition and his desire to rationalize the idea of Hell by incorporating contemporary cartographical lore.

Francesco Marcolini's courageous decision to print a heavily illustrated edition of La Commedia with the commentary of Vellutello must be analyzed in the context of other editions of the poem that were printed in the fifteenth and sixteenth centuries. For this purpose, we must mention two landmark titles that somehow established the scholarly and aesthetic standards by which subsequent editions were measured: Comento di Christophoro Landino sopra la Comedia di Danthe Alighieri Poeta Fiorentino (Florence: Nicolò di Lorenzo della Magna, 1481) and Le terze rime di Dante (Venice: Aldus Manutius, 1502).

An obligatory element of the medieval commentary was the prologue, technically known as accessus ad auctores. This introduction was typically designed to clarify the purpose and structure of the work to be commented upon, including explanations on the author's intention, the title of the work, its stylistic and pedagogical significance, its subject matter, its arrangement, and its moral implications. In his introduction or proemio Landino went beyond the conventions of the medieval accessus by presenting La Commedia as an expression of Florentine culture and Neoplatonism. This 1481 edition was illustrated with woodcuts whose designs have been attributed to Botticelli. In turn, Vellutello uses his proemio to criticize previous commentators. Specifically, he directs much of his criticism against Landino for not adding anything new to the previous exposition by Benvenuto da Imola. In general, Vellutello stresses the historical content of La Commedia being skeptical of those scholars who concentrate on literary aspects such as the allegorical meaning of the poem. Moreover, by condemning those intellectuals who spend their lives secluded from others, one may note that Vellutello probably referred to the literary circle of Pietro Bembo, the editor of Aldus Manutius' edition of La Commedia in 1502.

Aldus' publication of Le terze rime di Dante in 1502 was part of his ambitious project to make the ancient and contemporary classics available to that reader who did not have time to go though the lengthy commentaries included in the previous large folio editions. By using the small octavo format and an italic type that closely resembled the chancery script, the reader could freely carry this small edition of the poem anywhere, intimately engaging with the text without the constant guidance of the commentator's authority. In subsequent years, Italian printers attempted to publish editions that could compete with the Aldine productions. In 1506, Philippo di Giunta published an edition of La Commedia commented upon by Girolamo Benivieni: Commedia di Dante insieme con vno dialogo circa el sito forma et misvre dello inferno(Florence: Philippo di Giunta, 1506). Based on the calculations of the Florentine mathematician and architect Antonio Manetti, this edition included a series of woodcuts illustrating the site, shape and size of Dante's Inferno. Certainly, in his 1481 proemio Landino had also included a section derived from Manetti's calculations: "Sito, forma, e misura dello 'nferno e statura de' gigante e di Lucifero." However, the detailed illustrations of Hell in the 1506 Giunta edition had created a new set of intellectual and aesthetic expectations among readers. In 1515, the Aldine press issued an edition of the poem with a two-page cross-section of the inverted cone of Hell, including the mileage calculations from Manetti's theories. Its title explicitly invites the reader to explore this new feature: Dante col sito, et forma dell'inferno tratta dalla istessa descrittione del poeta (Venice: Andrea di Asola, 1515). The increasing popularity of these topographies of Hell must have convinced Marcolini to invest in a richly illustrated book. The commentator himself announces the quality of the new annotations by criticizing previous representations of Hell, particularly the Aldine edition: "Unaltra cagione, che non meno importa, mha mosso ancora questo, laqual è, per haver trovato gliantichi testi scritti a penna, ma piu i moderni impressi a stampa incorrectissimi, e sopra tutti quello impresso e stampato da Aldo Manucci, che appresso di tutti è stato in tanta estimatione,…"

The next three images come from Vellutello's proemio. They represent different circles of the Inferno including data on their dimensions: diameter and depth. 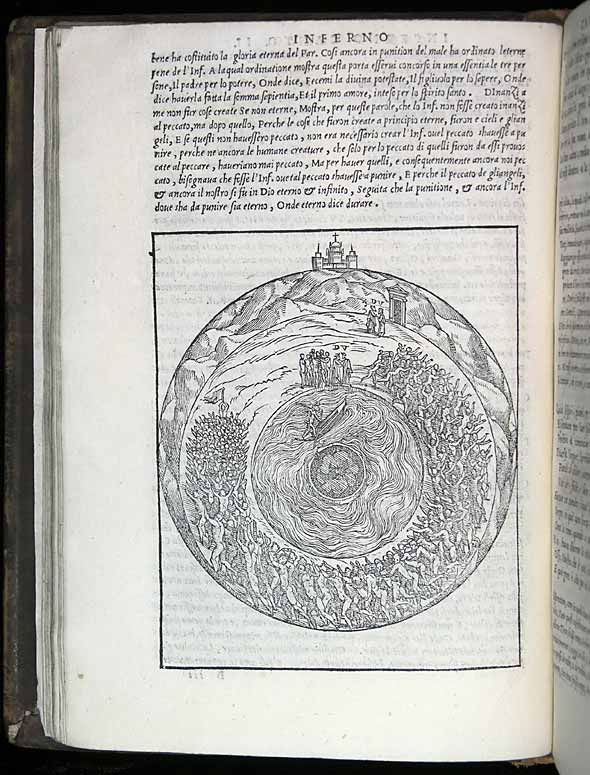 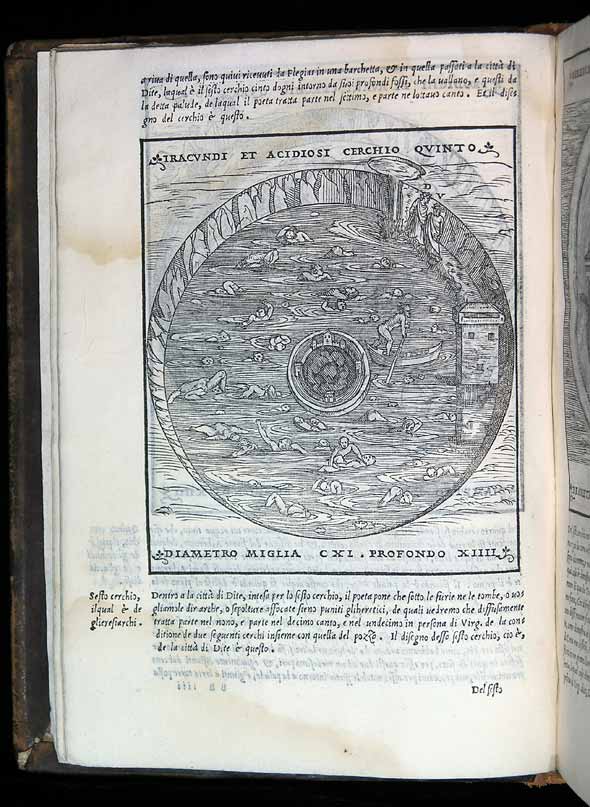 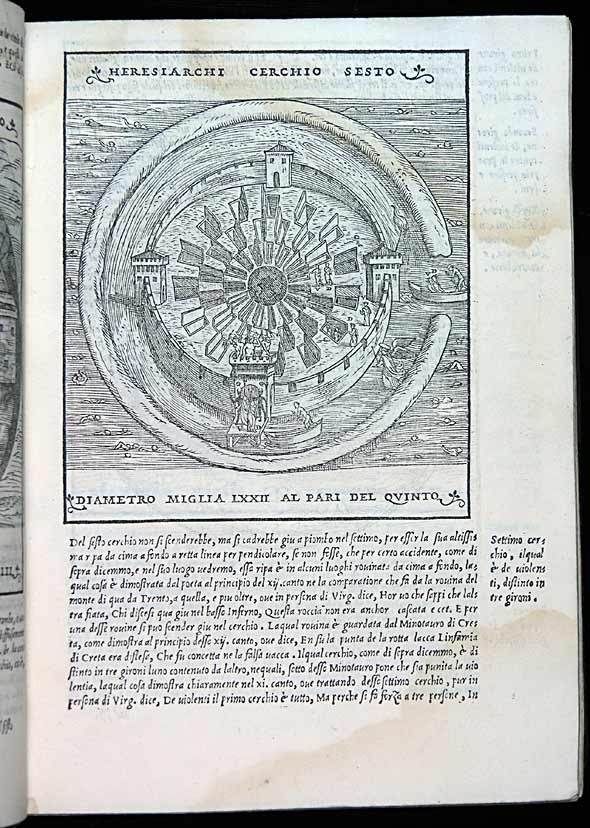 At the end of Canto XVII, the monster Geryon set down both Dante and Virgil at the entrance of the eighth circle of hell. The designer of this woodcut had to meet the challenge of representing the topography of a subdivision of the eighth circle: the malebolge. According to Dante, the malebolge resembles the ground plan of a castle encircled by moats spanned by bridges. In turn, the malebolge is composed of ten descending concentric circles, in which panderers, seducers, and flatterers are punished. Horned devils lash the condemned, who run in two circles that move in opposite directions. Formerly, some manuscript illuminators were unable to replicate what Dante describes as a bird's-eye view showing a yawning abyss. Instead, the design often resembled a round castle keep with five circular moats arranged on terraces. Conversely, our printed edition of the poem clearly shows that the artist was able to overcome the perspective challenges successfully. 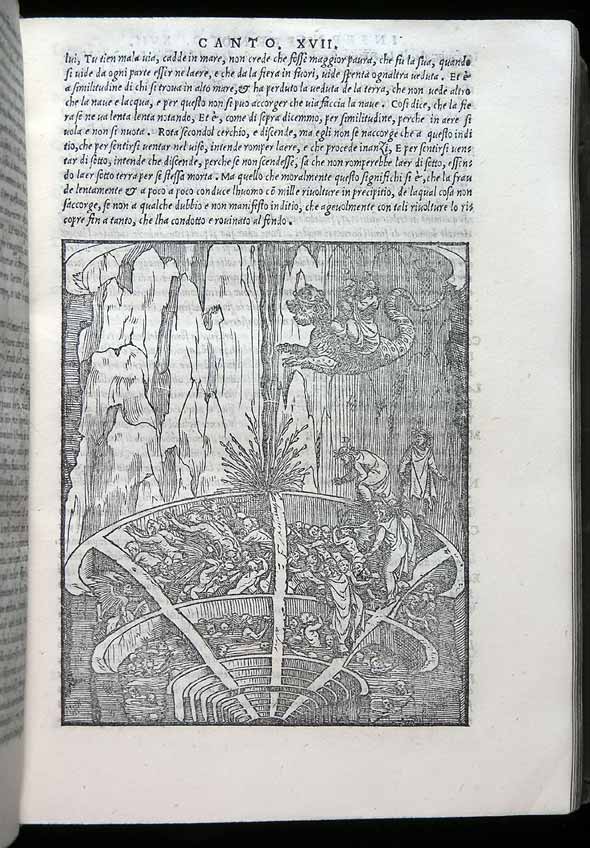 In the image inserted below, we can observe a perfect example of how these three elements -- text, commentary, and illustration -- played an essential role in providing an interpretation of the poem. From a bridge over the ninth concentric circle of the malebolge Dante and Vergil are looking down over the perpetrators of turmoil and schism. In their endless walk around the circle, the offenders are continuously mutilated by a devil. After their wounds heal, they are again exposed to the same punishment. The poet states that the horror of the battlefield in southern Italy from the legendary times of Aeneas to the wars of his own time are not sufficient to describe what is taking place in this bolgia. In the commentary located on the right, Vellutello illustrates this verbal challenge, or inability, by citing three verses from the sixth book of Vergil'sAeneid : non, mihi si linguae centum sint oraque centum,/ ferrea vox, omnis scelerum comprendere formas,/ omnia poenarum percurrere nomina possim ( Aeneid 6.625-7): "If I had a hundred tongues, a hundred mouths and a voice of iron, I could not encompass all their different crimes or speak the names of all their different punishments." With these words, the Sibyl of Cumae expresses the impossibility of describing all the crimes and punishments of those who committed monstrous offenses against the gods. This literary reference should not surprise us since the mythological journey of the Sibyl and Aeneas through the underworld was generally considered the main literary source of Dante's depiction of the Inferno. 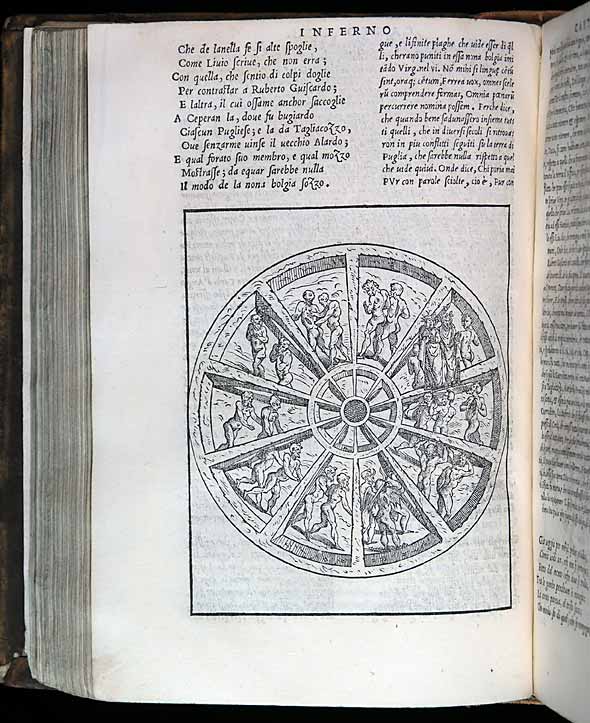 Hopefully, this essay might inspire the reader to examine a particular edition of La Commedia in order to understand how the physical form of a book affects the way the text is read, understood, and disseminated.