Collection Highlight: Dryden's Ode, on the Death of ... Purcell

In the last five years of his life, Purcell composed music for a number of Dryden's plays, including Amphitryon (1690) and King Arthur (1691). 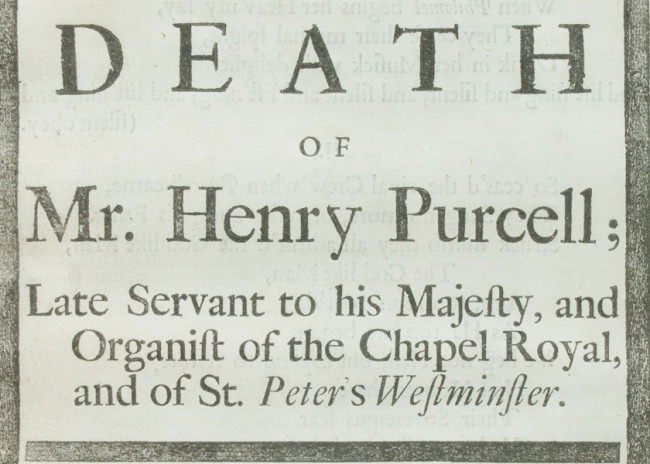 John Dryden (1631-1700)
An Ode, on the Death of Mr. Henry Purcell; Late Servant to his Majesty, and Organist of the Chapel Royal, and of St. Peter's Westminster. The Words by Mr. Dryden, and Sett to Musick by Dr. Blow. London: Henry Playford, 1696.
Courtesy of Ruth T. Watanabe Special Collections, Sibley Music Library. 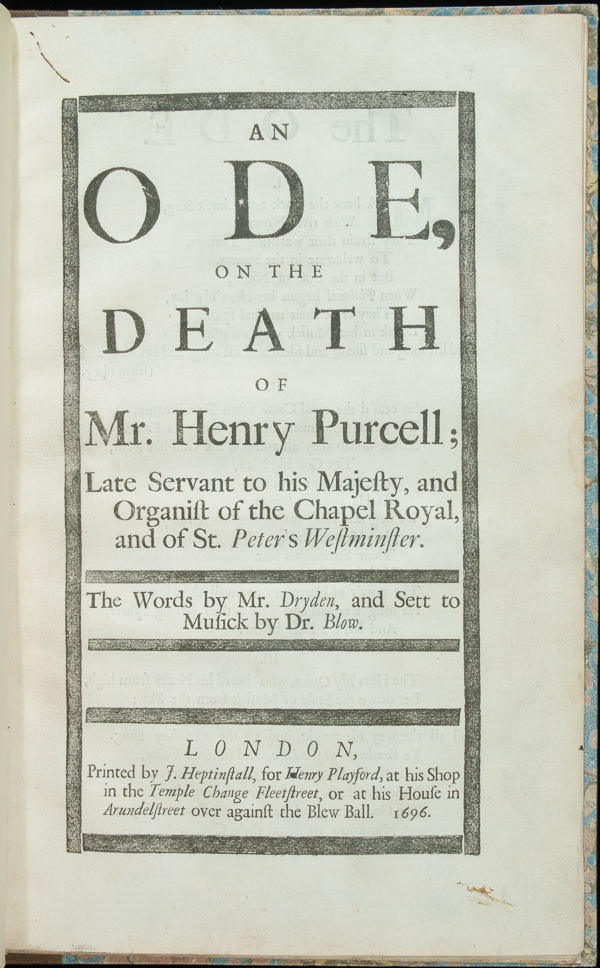 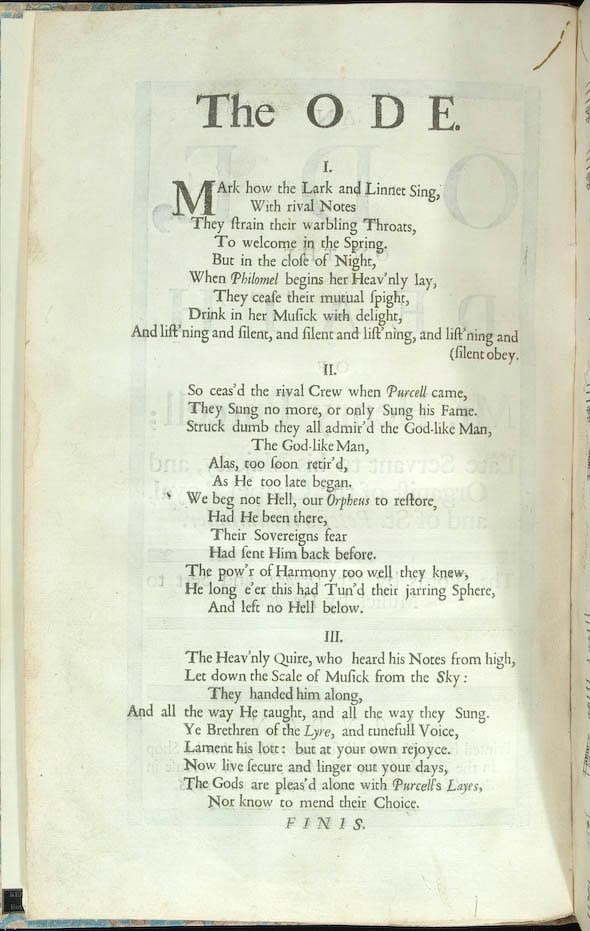 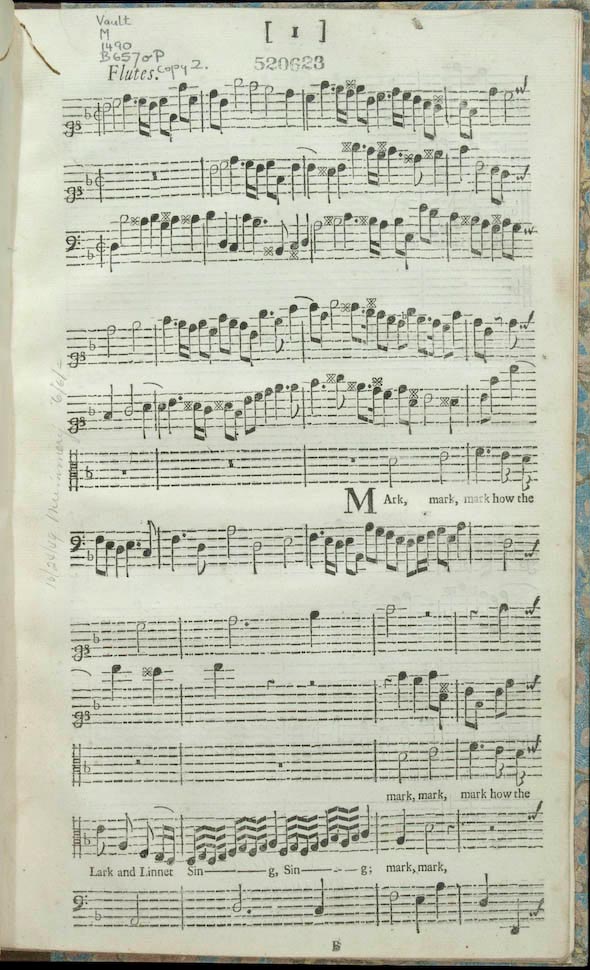 There were two ways to print music during the hand-press period. The oldest method was relief printing, or printing with type, which was identical to printing words by the movable-type system. Dryden's Ode was printed in this technique, as shown above. The other way was to use copperplate engraving, originally introduced in the English world during the first years of the seventeenth century. 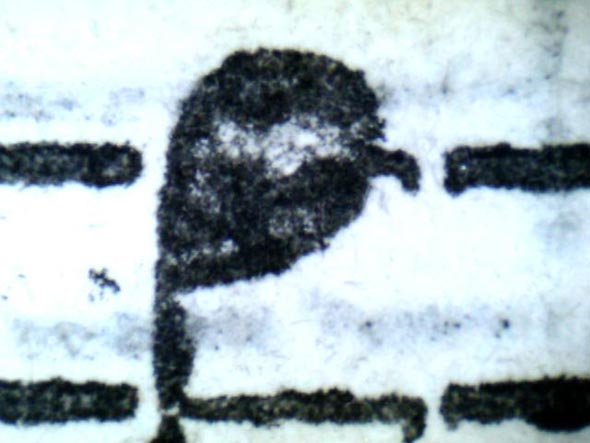 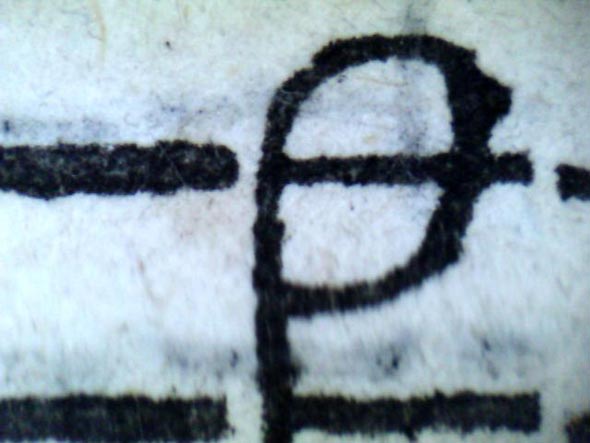 How were the musical notes cut on the punches in order to be struck in a matrix? Could the images of type faces displayed above reveal how the cutting and casting of music type were done? Generally, two punches were used, one for the staff lines and the other for the musical sign. First, the lines were struck, then the note in the adequate staff position. However, the problem with this technique is that the second strike could damage the impression of the first, so that the staff lines on the matrix were often erased in the area around the musical sign. But an easier method was designed to overcome this problem. For all the notes of a particular shape, a single punch was cut including nine staff lines and the musical sign on the central line. Then, a special casting mould was made in which the matrix could be placed in different vertical positions, determining which five lines out of nine would appear on the matrix and, therefore, establishing where the musical note would be located on the staff (Krummel, 1975: 6). 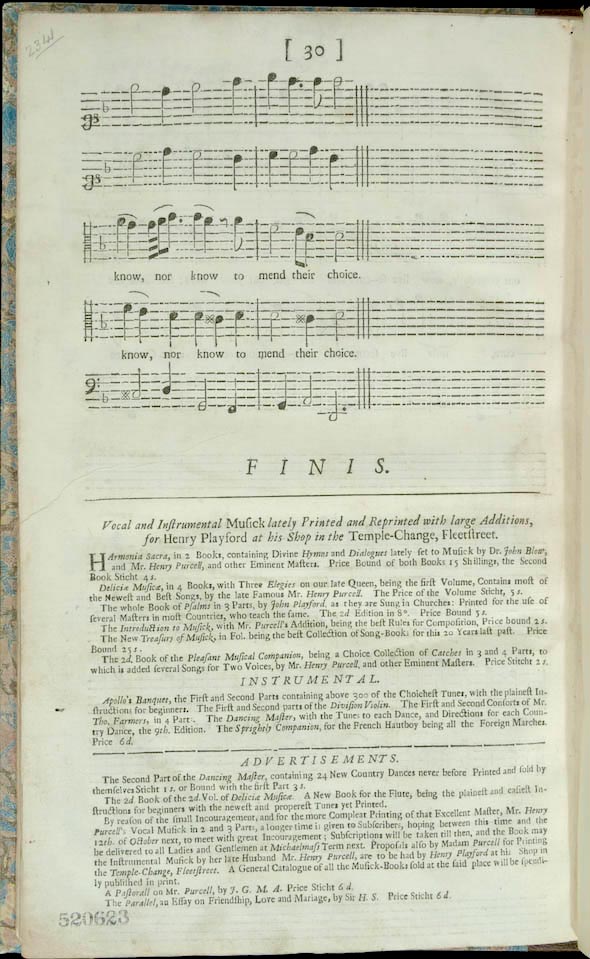 The publisher of the first edition of Dryden's Ode was Henry Playford (1657-1709), the son of the famous music publisher John Playford (1622/3-1686/7) (Plomer, 1907:148). Almost single-handedly, John Playford had managed to turn the printing of music into a successful commercial enterprise. Particularly, he introduced innovative marketing techniques such as the use of decorated title pages, advertisements (see Henry Playford's adds above), and prefaces, in order to connect with the taste of a particular audience. Contrary to previous publishers of music who specialized in continental authors, John Playford paid particular attention to English music, including popular songs. Henry Playford, however, failed to preserve the success of his father. Although Henry imitated his father's editions, and even continued some of his series by issuing the first three volumes of The Theatre of Music (1685-6), he had to compete with a growing number of music publishers, especially with those who sold cheap engravings of popular songs. He eventually sold his stock through a catalogue and an auction (Krummel, 1975:115-23).

________. The Literature of Music Bibliography: An Account of the Writings on the History of Music Printing and Publishing. Berkeley: Fallen Leaf Press, 1992.

Plomer, Henry R. A Dictionary of the Booksellers and Printers who were at Work in England, Scotland and Ireland from 1641 to 1667. London: Printed for the Bibliographical Society by Blades, East & Blades, 1907.