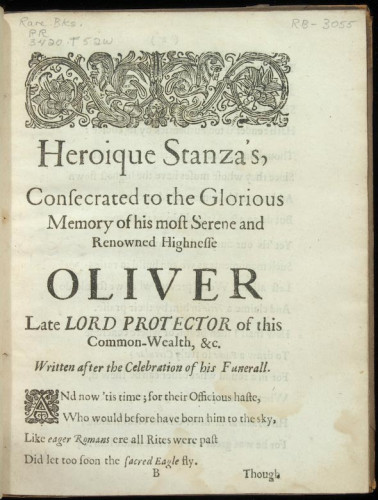 Oliver Cromwell (1599-1658), Lord Protector of England, Scotland, and Ireland, died on 3 September and was buried on 23 November 1658. At that time, John Dryden had recently moved to London to accept a minor clerical position in the Protectorate's civil service. Actually, he had obtained this post through the influence of his cousin Gilbert Pickering (1611-1668), who was then Cromwell's Lord Chamberlain (Malone, 1800: 1. 27-8). The fact that, along with Sprat and Waller, Dryden contributed a funerary eulogy honoring the Protector has puzzled historians and literary critics. Wasn't it a risky political move considering the chaos and instability that followed shortly after the death of Cromwell? It is plausible that a thirst for literary glory prevented Dryden from assessing the political situation objectively. It is also likely that Dryden merely complied with the obligations of patronage: Pickering might have suggested that he write this panegyric! As a matter of fact, Pickering was in charge of the funeral arrangements, and Dryden marched in the funeral procession along with John Milton (1608-1674) and Andrew Marvell (1621-1678) as "Secretarys of the ffrench and Latin Toungs" (Patterson, 2004: 222). When the Protectorate of Richard Cromwell (1626-1712) collapsed in 1659, General George Monck (1608-1670), first duke of Albemarle, would make possible the return of the king in exile. Eventually, Charles II entered London on 29 May 1660, and Dryden waited until mid-June to make public his allegiance to the new king. 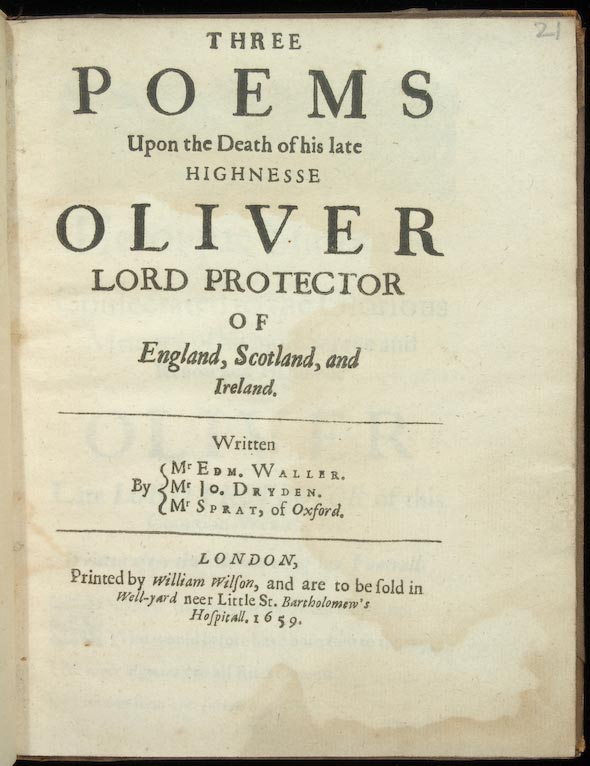 On 20 January 1658 the publisher Henry Herringman added the following entry in the Registers of the Stationers Company: "Entred... under the hand of Master Pulleyn warden a booke called Three poems to the happy memory of the most renowned Oliver, late Lord Protector of this Comonwealth, by Mr Marvell, Mr Driden, Mr Sprat... vjd" (Briscoe Eyre, 1913: 2. 211). Herringman, who was professionally active from 1653 to 1693 (Plomer, 1907: 96-7), and was Dryden's publisher from 1660 to 1693 (Wheatley, 1912: 17-38), might have foreseen the failure of the new Protectorate, passing his publication rights to William Wilson (Plomer, 1907: 196). Similarly, Marvell was also cautious as his poem was replaced by Waller's piece, which had been previously printed on the recto of a single half sheet: Upon the Late Storme, and of the Death of his Highnesse ensuing the same, by Mr. Waller (London: H.H. [1658]). Whereas Marvell managed to face the Restoration with a "clean record", Dryden, who in the course of his life would turn into a fervent Royalist, a Catholic, and a Jacobite, saw his Cromwell panegyric being reprinted by his Whig enemies in 1681 and 1687 (Macdonald, 1939: 3b; 3e). 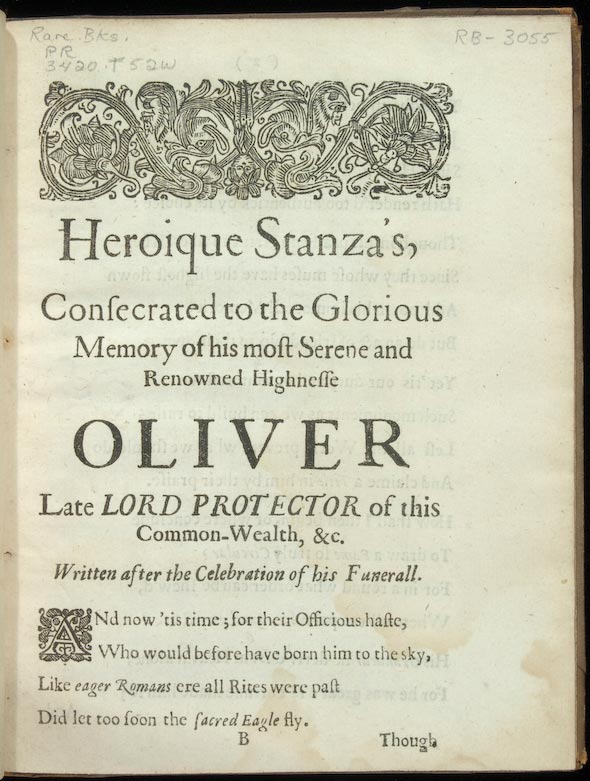 Dryden's Heroique Stanza consists of a series of quatrains numbered [1] to 37. This edition is actually the only extant authoritative text of the poem, unless it is possible to prove that Dryden himself supervised Jacob Tonson's reprint, published probably in 1693 (Macdonald, 1939: 3f). 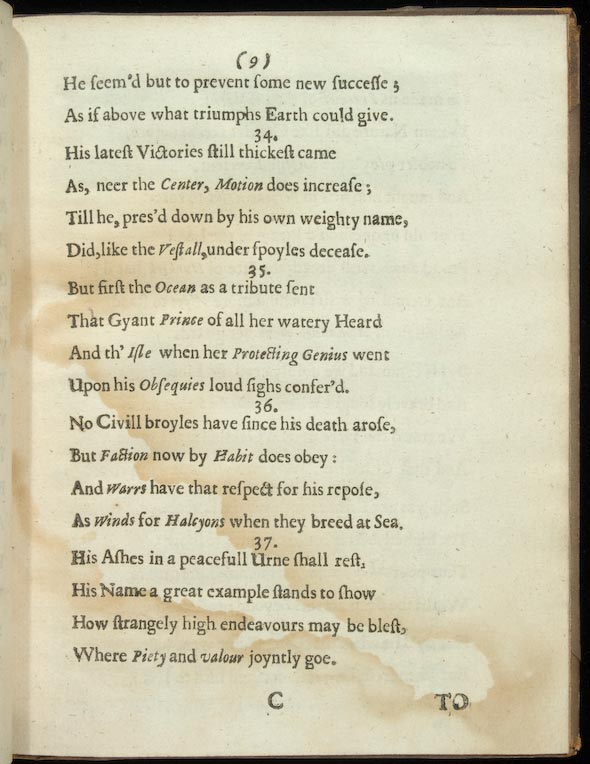 The purchase of this title was made possible by the Dr. George F. Bowerman Fund (1966).

Malone, Edmond. The Critical and Miscellaneous Prose Works of John Dryden, now first collected: with notes and illustrations; an account of the life and writings of the author, grounded on original and authentick documents; and a collection of his letters, the greater part of which has never before been published. 3 vols. London: H. Baldwin and Son, 1800.

Plomer, Henry R. A Dictionary of the Booksellers and Printers who were at Work in England, Scotland and Ireland from 1641 to 1667. London: Printed for the Bibliographical Society by Blades, East & Blades, 1907.