"We hope that Mr. Dryden will undertake to give us a Translation of Virgil; 'tis indeed a most difficult work..." 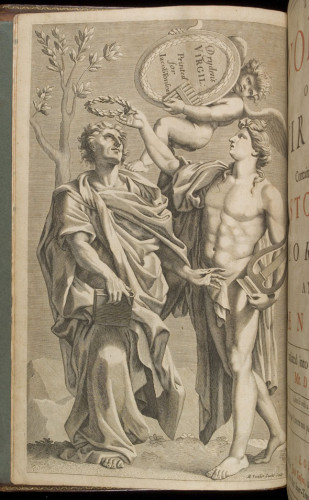 "Last, for my selfe: I have undertaken to translate all Virgil: & as an Essay, have already paraphrasd, the third Georgique, as an example; it will be publishd in Tonsons next Miscellanyes, in Hillary terme. I propose to do it by subscription; haveing an hunderd & two Brass Cutts, with the Coats of Armes of the Subscriber to each Cutt: & every Subscriber to pay five guinneys: half in hande besides another inferiour Subscription of two Guinneys, for the rest whose names are only written in a Catalogue, printed with the Book." (Ward, 1942: 64).

The details of this proposal would be materialized in a contract that Dryden established with the publisher Jacob Tonson a year later (British Library: Additional MS 36,933 and Add. Charter 8,429). Specifically, the documents are dated June 15, 1694, being witnessed for Dryden by the playwright and poet William Congreve (1670-1729). In this written agreement, Dryden concurred to translate "with all convenient speed from the Latine into English Verse all the Ecclogs Georgicks And Eneids of Virgill and prepare them for the Presse." To finish the work as soon as possible, he also stated that he "will not write translate or publish or assist in the writing translating or publishing of any other book…" with the exception of "a little French Booke of Painting which he hath engag'd to perform for some Gentlemen Vertuosoes and Painters," original works that would not exceed the price of one shilling, and "the writing of the prolouge Epilouge or songs" to his son's play."

Tonson agreed to pay Dryden the amount of £200, which covered the following: £50 for the Eclogues and Georgics ; £50 for the first four books of the Aeneid; £50 for the next four books; and £50 for the last four. Apart from this payment, it was agreed that most of the translator's income would come from subscribers. They were limited to 100—although one more was added—and, as Dryden anticipated in that letter to Walsh, were to pay five guineas, through which they would have dedicated to them a full-page illustration engraved with their names and coat of arms. The subscription list would be opened during the early stages of the translation, and the subscribers were to give three guineas as a down-payment, paying the other two upon receiving their copy. The publisher also agreed "to use all his interests and Indeavour to procure so many persons as there are Cutts in the said book to subscribe to pay five guineys each person to be paid to the said John Dryden," further promising to supply the copperplates formerly employed by John Ogilby (1600-1676) in his translation of Virgil: The Works of Publius Virgilius Maro ( London: Printed by Thomas Warren for the author, 1654)—the first edition of his translation had been published without plates in 1649. 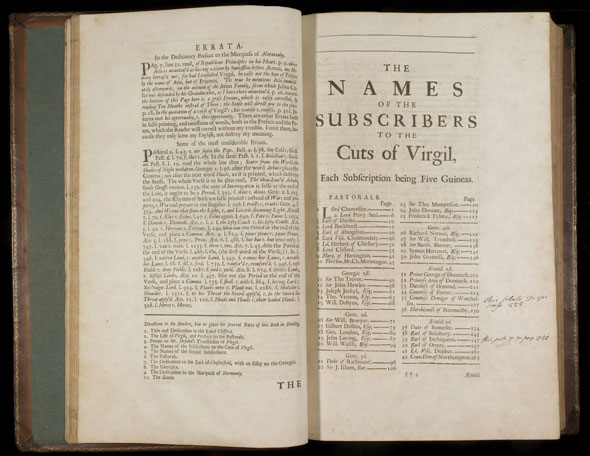 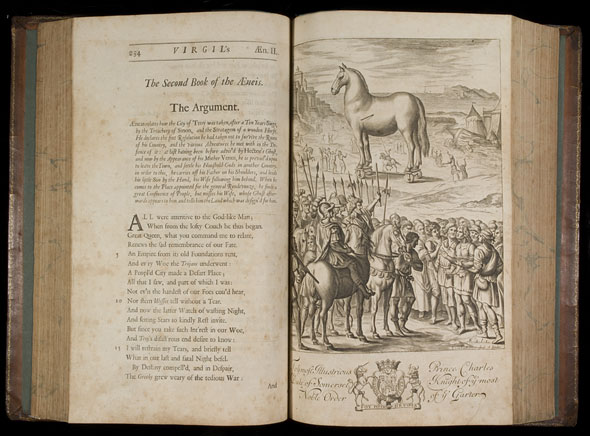 The contract also established the creation of a second subscription list, which Dryden was allowed to open after completing half of the translation. These subscribers were offered the same book but without plates dedicated to them. They had to pay one guinea as a down-payment, and a second upon delivery of the Virgil. However, for this second subscription, the conditions were less favorable to Dryden. Each of the 250 copies for this list was sold to the author for the selling price of the version for the general public, which Tonson calculated at £1, plus the difference between the common paper and the special paper used for the subscribers: 6 s . 4 d.

Overall, the publication of the Virgil brought Dryden earnings of at least £910 6 s . 8 d (Barnard, 1963: 139). To this amount we should also add money given by patrons, possibly from influential friends such as Dryden's dedicatees, Thomas Clifford, first Baron Clifford of Chudleigh (1630–1673), Philip Stanhope , second earl of Chesterfield (1633–1714), and John Sheffield, first duke of Buckingham and Normanby (1647-1721). How much did he receive in monetary gifts? An estimation of the total profit Dryden actually made from both subscribers and patrons rests upon a manuscript note reporting a writing statement by Richard Graham ( fl. 1695-1727), author of " A Short Account of the Most Eminent Painters, both Ancient and Modern"—this work was added as a supplement to Dryden's translation of Charles Alphonse Du Fresnoy'sDe arte graphica, published as De arte graphica. The Art of Painting. London : W. Rogers, 1695. The note proper says: " Mr Dryden own'd to me, that by ye money paid him by Mr Tonson, by his Dedicats & by his Subscriptn he got 1400 l for his Translatn of Virgil” (Osborn, 1965:13). Clearly, this final figure reveals that the larger part of the total profit came from the subscribers and the publisher himself, freeing Dryden from his dependence on individual patrons, as it had happened in the past. In general, this publishing venture is an example of how by the end of the seventeenth century English publishers were able to minimize the role patrons had traditionally played in literary endeavors.

There is evidence that English readers were at that time ready for new translations of the classics, especially for a new version of Virgil's works. Just three months before Tonson and Dryden signed the agreement for the Virgil, it seems that Peter Motteux (1663-1718) was echoing a popular demand when he wrote the following comment in the March installment of The Gentleman's Journal, or, The Monthly Miscellany (London: Henry Rhodes, 1694):

"We hope that Mr. Dryden will undertake to give us a Translation of Virgil; 'tis indeed a most difficult work, but if any one assure himself of success, in attempting so bold a task, 'tis doubtlets the Virgil of our Age, for whose noble Pen that best of Latin Poets seems reserv'd" (March, 1694).

Since Dryden was already 62 years old when he undertook the translation of Virgil, it is not surprising to learn that he requested the help of friends. At the end of his dedication to Normanby, "A Discourse on Epick Poetry," he states that Congreve had reviewed the Aeneis, adding the following: "Two other Worthy Friends of mine, who desire to have their Names conceal'd, seeing me straitned in my time, took pity on me, and gave me the life of Virgil, the two Prefaces to the Pastorals, and the Georgics, and all the Arguments in Prose to the whole Translation" (Macdonald, 1939:57). Moreover, the author dramatically emphasizes his old age in his "Postscript to the Reader:" "What Virgil wrote in the vigor of his Age, in Plenty and at Ease, I have undertaken to translate in my Declining Years: struggling with Wants, oppress'd with Sickness, curb'd in my Genius, liable to be misconstrued in all I write."

One may wonder whether the last phrase, "liable to be misconstrued in all I write," is alluding to the fact that Dryden wished his translation to be interpreted according to the political circumstances of his age. Would his contemporaries detect these subtle references? When Dryden completed his Virgil in 1697, some dramatic changes had taken place around him. Since he had become a Catholic in 1685, he lost his post as poet laureate after the Glorious Revolution of 1688, when the Dutch Protestant William of Orange was enthroned and the Catholic James II abdicated. Therefore, it is tempting to suggest that this English translation be examined as the work of a representative of a religious minority who was critical of the new political regime. In fact, in his "Life of Virgil," the Roman poet is described as a man like Dryden himself, as an individual who quietly opposed Augustus's imperial revolution as Dryden resisted the Revolution of 1688. Consequently, Dryden managed not to dedicate the Virgil to the king and was against any attempt to identify the hero Aeneas with William III. Thus, in a letter to his sons, he refers to Tonson as trying to establish this comparison by manipulating the design of the plates: "But however he has missd of his design in the Dedication: though He had prepared the Book for it: for in every figure of Eneas he has causd him to be drawn like King William with a hookd nose."

Although the standard bibliographies of Dryden do not state when exactly the Virgil was available to the subscribers, an advertisement in The London Gazette (London : Edw. Jones, 1697) suggests that the book was published at the end of July:

"The Works of Virgil: containing his Pastorals, Georgics, and Aeneis. Translated into English Verse by Mr. Dryden. Adorn'd with a Hundred Sculptures. Printed for Jacob Tonson at the Judges-Mead in Fleet Street near the Temple Gate, where the Subscribed books are ready to be delivered in Quires upon bringing the Receipt, and paying the remaining part of the Subscription (From Thursday July 29 to Monday August 2," 1697).

Our copy of Dryden's Virgil was luxuriously bound in calfskin adorned with gold-tooling ornaments on both covers and the spine. 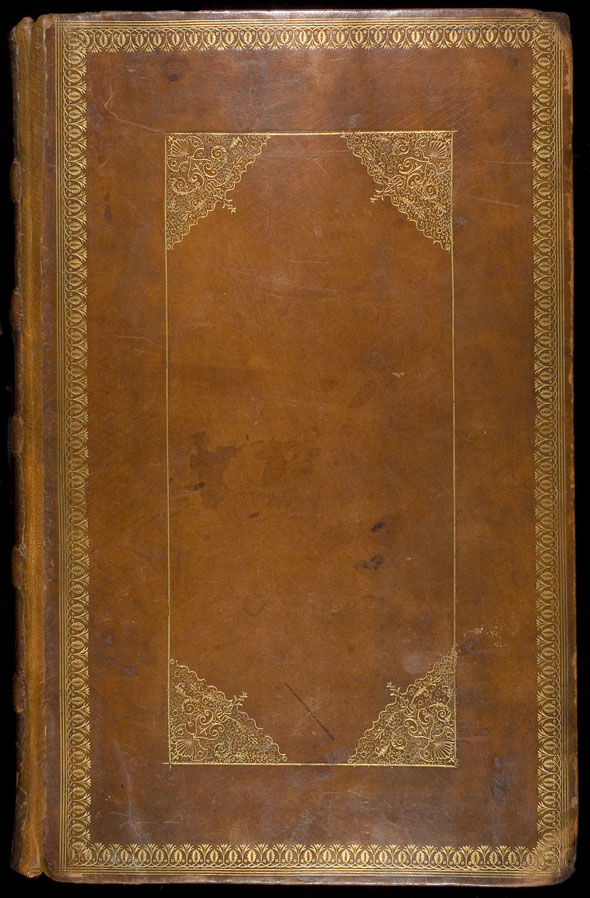