The frontispiece that opens Evelyn's translation of the first book of De rerum natura anticipates and summarizes the overall tone of Lucretius' poem. 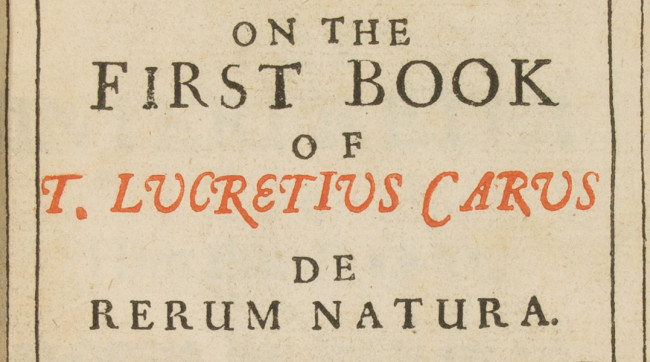 Enthusiastic followers of the Collection Highlight might recall previous features where we discussed the allegorical and programmatic content of some decorated title pages. See, for instance, the title pages of the 1627 edition of Francis Bacon' Sylva Sylvarum  and that of the 1634 edition of Maffeo Barberini's Poemata. Similarly, the frontispiece that opens John Evelyn's translation of the first book of De rerum natura somehow anticipates and summarizes the overall tone of Lucretius' poem. Following the teachings of the Hellenistic philosopher Epicurus (341-270 BC), the Latin poet Lucretius (1st century BC) based his interpretation of the world on the forces of nature exclusively, denying the existence of divine intervention. Hence, deprived of their traditional divine attributes, these four deities displayed in the foreground merely symbolize the four elements of nature.  Above these deities we also see the goddess Venus, whom Lucretius invokes in the first verses as the personification of Mother Nature herself. Here is Evelyn's version of those opening lines:

ROMES Parent Venus, joy of Gods
above
And Men, who under those bright signs
that move
In heaven, dost all comfort bring and mirth
To the ship-bearing Seas, Corn-bearing Earth;
By thee conceiv'd since all things living be
Beholding the Suns light, the Winds do flee
O Goddess, and the clouds which skies benight
Are dissipated, when thou com'st in sight
Smooth seas and heavens smile; under thy feet
Th'inamel'd earth doth her sweet flowers sumit; (Evelyn, 1656: 13).

Fire and Air are holding a wreathed medallion containing a portrait that, according to at least one contemporary of Evelyn, bears a close resemblance to the translator.  Indeed, in a brief introductory essay addressed to Arthur Annesley, first earl of Anglesey (1614–1686), Lucy Apsley Hutchinson (1620-1681) explains the aims of her own translation of the six books of Lucretius, including a reference to the frontispiece of Evelyn's edition:

MY LORD,—When I present this unworthy translation to your lordship, I sacrifice my shame to my obedience; for (though a masculine wit hath thought it worth printing his head in a laurel crown for the version of one of these books) I am so far from glorying in my six, that had they not by misfortune been gone out of my hands in one lost copy, even your lordship command, which hath more authority with me, than any human being I pay reverence to, should not have redeemed it from the fire (Firth, 1906: 452; Keynes, 1937: 43).

The frontispiece was designed by Evelyn's wife, Mary Evelyn (c. 1635-1709), and engraved by the famous artist Wenceslaus Hollar (1607-1677). For other examples of Hollar's art, see, for example, his engravings commissioned for John Ogilby's translation of The Iliad. 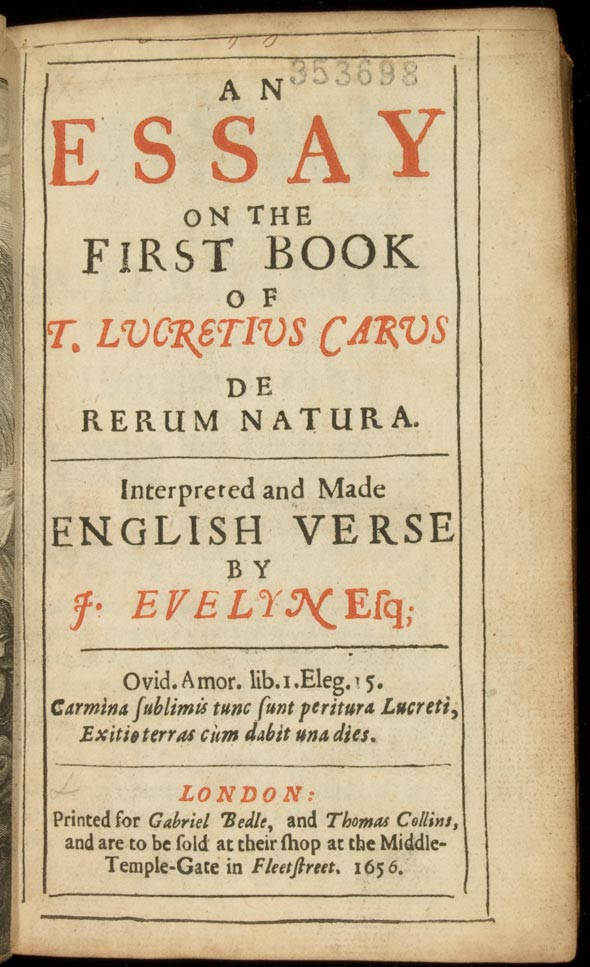 In a preface addressed to the reader, "The Interpreter to Him that Reads," Evelyn explains the scope of his translation. Below is a passage from that essay:

"But however, I must now bewail my temerity. I have yet been as industrious as I could to explain the Poets sense and meaning in his own natural way; using very little Paraphrase, where I could possible contract him without impeachment of his Argument, or defacing of the Ornament: so that if I have seldom exceeded the number of Verses, save where the Rhyme it self obliges me sometimes to multiply Epithetes, and protract the line; I hope I have neither made a disadvantageous bargain for our Language, nor in the least violated the limits of an Interpreter, which are yet infinitely more indulgent, and give a far greater latitude, as I could abundantly exemplifie." (Evelyn, 1656: A3v)

As it was customary in literary works of the seventeenth century, the author often made sure that his literary endeavors had the approval not only of other scholars but also of influential individuals in both political and intellectual circles. Therefore, for this edition Evelyn managed to insert commendations by his father-in-law, the baronet and diplomat Sir Richard Browne (1605-1683), by the poet Edmund Waller (1606-1687), by the Oxford scholar Christopher Wase (1627-1690), and by the diplomat and translator Richard Fanshawe (1608-1666). Finally, Evelyn added a two-page essay entitled "The Argument", a learned summary of the first book of De rerum natura. 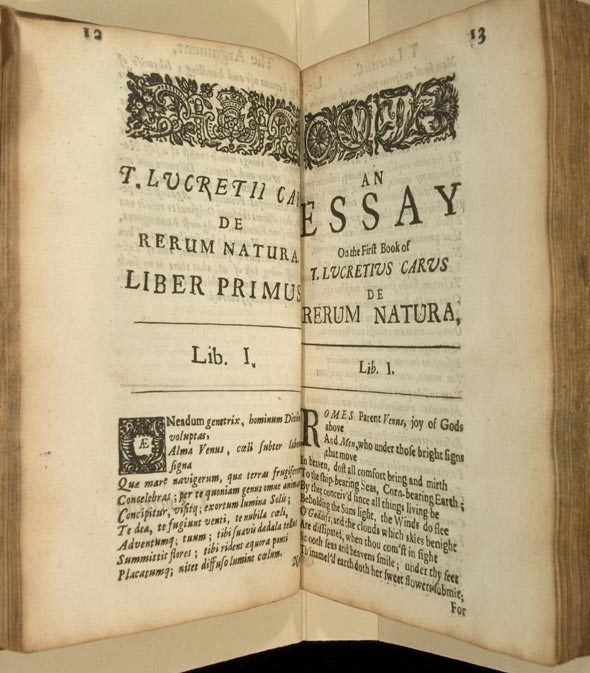 Since the Latin and English texts cover only 70 pages, in a notice entitled "The Stationer to the Reader", the publisher Gabriel Bedle—spelled Bedel in this edition—argues  that the so-called "animadversions", or commentaries, were added in order to enlarge the volume, and that their author himself had advised that these commentaries should be ignored whenever the educated reader considered them troublesome.

"I Must acknowledge ingenously, That these Animadversions following, were some scattered Collections encountred at the end of this Copy, which it was the Authors express desires I should totally suppress; as being conscious how justly they might importune the Learned, to whom (he told me) they were so little considerable: But to advance our particular Interest, and gratifie the Printer (who objected the Volume was too final of it self) I have adventured to publish this Addition: and (since I cannot but believe it will please some) shall beg pardon both of the Writer and Reader, for this presumption of their 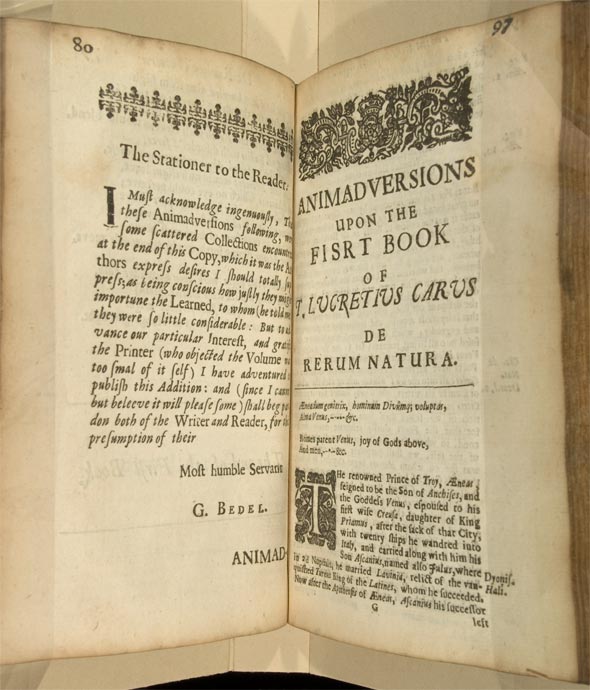 Bedle's warning is certainly ironic, for Evelyn thought that these animadversions would actually protect him against future criticism. Precisely, when the book was still in printing, he expressed this view in a letter to his friend and spiritual advisor Jeremy Taylor (bap. 1613-1667), Church of Ireland bishop of Down and Connor (April 27, 1656) (Bray, 1906: 3, 215; Keynes, 1937:42).

Nevertheless, Evelyn was extremely disappointed with the final result—one of many examples is the pagination error we see in the image above. For May 12, 1656, he wrote in his diary: "Was published my Essay on Lucretius—with innumerable Errata &c; [by] the negligence of Mr. Triplet who undertook the Correction of the Presse in my absence" (De Beer, 1955: 3, 173).

However, the shortcomings of this edition cannot be only attributed to the corrector but also to the lack of other scholarly commentaries and translations. One must take into account that the tradition of textual criticism of the poetry of Lucretius was relatively recent, and that Evelyn was in fact the first scholar to translate Lucretius' verses into English. From the time of the rediscovery of Lucretius's work by Poggio Bracciolini in 1417 until the eighteenth century, the appreciation of the poetry of De rerum natura,or of how complex philosophical ideas have been skillfully articulated in beautiful hexameters, was often undermined by the rejection of the poet's anti-religious ideas. Certainly, silence on Lucretius' poetry between the ninth and the fifteenth centuries was due to the fact that Lucretius refused to recognize the immortality of the soul as well as promoted pleasure as the ultimate good. Indeed, these ideas made the poem unacceptable to the world of the medieval church, and even Renaissance humanists were reluctant to admit the full implications of Lucretius' Epicureanism. Thus, in terms of the number of editions, commentaries and translations, Lucretius had traditionally received very little attention compared to other Latin poets such as Vergil, Horace and Ovid.

After Thomas Creech (1659-1700) published his translation of De rerum natura in 1682, Evelyn contributed to the second edition, published in 1683, with a laudatory poem, "To Mr. Creech on His accurate Version of Lucretius." In these verses, he openly admitted that his own pioneering translation had been improved by that of his successor:

TIs true, Perswaded that there was rich Ore,
I boldly Launch'd, and would new Worlds explore:
Deep Mines I saw, and hidden Wealth to lie
In Rocky Entrails, and in Sierras high:
I saw a fruitful Soil, by none yet trod,
Reserv'd for Hero's, or some Demi-God
And urg'd my fortune on
'Till ruged billows, and a dang'rous Coast
My vent'rous Bark, and rash Attempt had Cros't;
When Landing, un-known Paths, and hard access,
Made Me Despond of Pre-conceiv'd success,
I turn'd my Prow, and the Disco'vry made,
But was too Weak, too Poor my self to Trade,
Much less to make a Conquest and Subdue,
That glorious Enterprise was left for You:
Columbus thus, only discover'd Land,
But it was Won by Great Corteze's hand:
As with rich Spoils of goodly Kingdomes fraught,
They immense Treasure to Iberia brought,
So you the rich Lucretius (unknown
To th' English world) bravely have made Your Own,
And by just Title, You deserve the Crown (Creech, 1683: C2: Gordon, 1962: 175).

Evelyn, John. The Diary of John Evelyn, esq., F.R.S.: to which are added a selection from his familiar letters and the private correspondence between King Charles I and Sir Edward Nicholas, and between Sir Edward Hyde (afterwards Earl of Clarendon) and Sir Richard Browne. William Bray, ed. 4 vols. London: Bickers, 1906.

Keynes, Geoffrey. John Evelyn: A Study in Bibliophily with a Bibliography of his Writings. Cambridge: Cambridge University Press, 1937.