An exhibit that celebrates Rochester’s rich Jazz history through the camera lens of photographer, Paul Hoeffler. 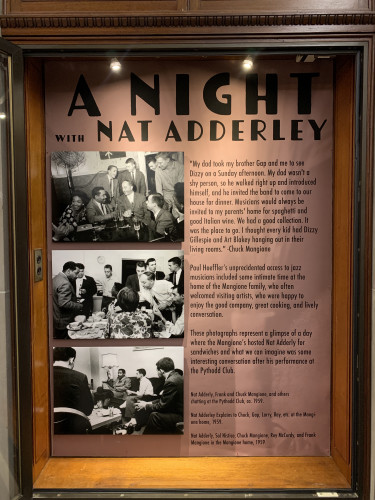 Located in the Friedlander Lobby on the first floor of Rush Rhees, an exhibit is currently on display that celebrates Rochester’s rich Jazz history through the camera lens of photographer, Paul Hoeffler. Hoeffler, in the second part of the 1950s, as a student at RIT, moonlighted as a photographer, capturing some of the most iconic figures of the mid-century jazz scene, as well as the legendary music venues that made Rochester, New York a jazz destination.

Caption: A night with Nat Adderley shows an intimate look at the Mangione household, full of friendship, conversation, and sandwiches among jazz lovers.

The eight panels feature text, as well as photographic prints taken between 1955 and 1959 in clubs and other venues around Rochester, the University of Rochester campus, and in such unlikely spots as the Mangione family home, where teenage Chuck and Gap Mangione, and their family, entertained visiting jazz musicians with spaghetti dinners, cold cuts, and great conversation.

The exhibit is both in honor of the Eastman School of Music’s 100th anniversary, and as a way to share a selection of these incredible photographs, which are part of the Paul Hoeffler "Rochester Jazz" photographic collection  in the Department of Rare Books, Special Collections, and Preservation. The photographs offer an intimate look at the performers and the audiences, with diverse backgrounds coming together to hear really great music.  The panels offer different insights to venues and feature QR codes of select performances and additional resources that help bring the exhibit to life.

Paul Hoeffler, during his four years at RIT at the young age of 17, befriended and spent time with internationally known musicians such as Billie Holiday and Louis Armstrong. They trusted him enough to let him see the behind-the-scenes moments of their lives, resulting in photographs that truly express the souls of their subjects. The photos selected for this exhibit highlight several aspects of the Rochester jazz scene, including jazz clubs, visiting artists, family and friends, dance, and music at the University of Rochester.

While pursuing a BFA in Photography at the Rochester Institute of Technology, he began his work photographing jazz musicians in Rochester, which became the primary subject of his photographic work for the entirety of his career.  Over the next several decades he would base himself first in New York City, and then Toronto, traveling to Jazz concerts, and photographing for New York jazz record labels including Verve and Blue Note.

Hoeffler’s photographs were also featured in Ken Burns’ documentary series Jazz. From 2002-2003, photographic prints of his work were displayed in the RBSCP lobby on the second floor of Rush Rhees. The current exhibit in Friedlander lobby showcases a more selective set of Hoeffler’s prints, including some which were not displayed in 2002. Hoeffler passed away in 2005 at the age of 67.

Some of the most well-known and truly special photographs taken in Rochester by Hoeffler are those of Billie Holiday, taken two years before her young and tragic death. Reflecting on his brief time working with Billie in 1957, Hoeffler wrote,

“There wasn’t much left of Billie by that time. She’d gone. She wasn’t in good physical or mental shape. One minute she looked glorious; a minute later, you realized she wasn’t focusing. She had been terribly abused by life, and the fact that she accepted me and allowed me to drive her to where she was staying… well it was an experience that meant something. She was a bigger than life personality, but she'd never gotten out of the cycle of men who were bad. She was frequently the victim of racial slurs. I wasn't trying to capture her tragedy, necessarily, I just wanted to show her as she was.”

His description of his brief but meaningful interactions with “Lady Day”, photographing her performance then driving her to her hotel, speaks to one of the most incredible aspects of his style of work. Throughout his career, Hoeffler was known for being trusted by musicians, despite being an “outsider” to the jazz scene because he was not a musician. This quality is what gives one the sense that by viewing his photos, one is right there alongside the musicians.

The exhibition will be on view in the Friedlander lobby through the end of March, 2022.