Juneteenth is being celebrated by UR as an official holiday for the first time this year. 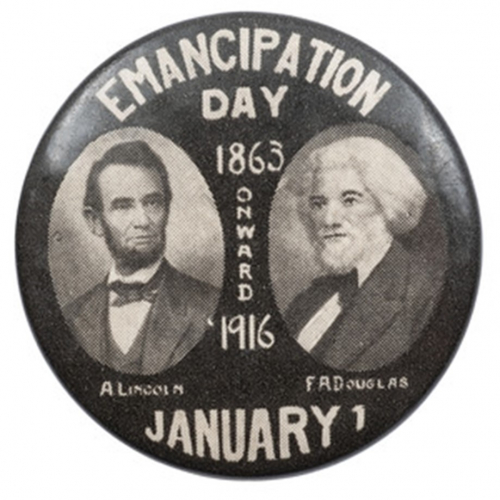 Juneteenth is being celebrated by UR as an official holiday for the first time this year. To commemorate the end of slavery in the United States, Juneteenth became a federal holiday for the first time in 2021. Themes and texts related to Juneteenth include the Emancipation Proclamation, the Thirteenth Amendment (“neither slavery nor involuntary servitude, except as a punishment for crime whereof the party shall have been duly convicted, shall exist within the United States, or any place subject to their jurisdiction”), and the Fifteenth Amendment (“the right of citizens of the United States to vote shall not be denied or abridged by the United States or by any State on account of race, color, or previous condition of servitude”).

RBSCP has material in its collections related to abolition, including records from activist Frederick Douglass and politician William Henry Seward. We also have collections that touch on the Civil War and the Emancipation Proclamation including letters, diaries, prints, and political papers.

A relatively new addition to our collections is the pin above featuring cello jugate portraits of Abraham Lincoln and Frederick Douglass. This Emancipation Day pinback button which reads, "Emancipation Day / January 1 / 1863 Onward 1916", commemorates the formal issuance on January 1, 1863, of Lincoln's Emancipation Proclamation that ended slavery in the Confederate States. January 1st thereafter became known as Emancipation Day in many African American communities and was celebrated annually with festivities often including song, dance, oratory, food, and prayer. Participation in the celebrations declined after Reconstruction, with Juneteenth now the more prevalent celebration of Black culture and freedom in the United States.