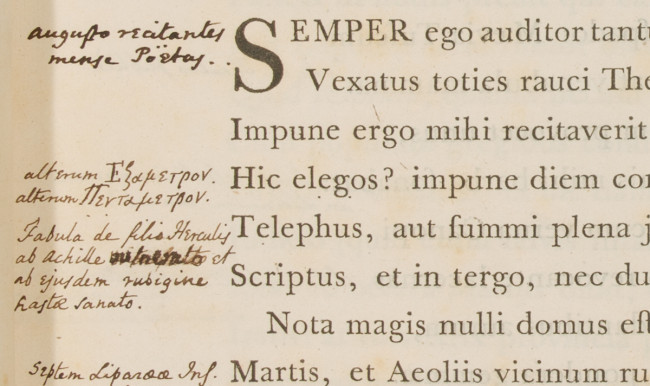 The type-founder and printer, John Baskerville (1706-1775), was originally a writing-master in Birmingham. When the japanning of snuff boxes turned out to be a profitable business, Baskerville decided to get involved in this trade, eventually making a fortune with the manufacture of all kinds of japanned goods. In fact, he became so prosperous that in 1745 he took a lease of an estate of eight acres, which he named Easy Hill, where he built a house as well as the infrastructure for the japanning business. About 1750, he became interested in typography (Straus and Dent, 1907: 6-44; Plomer, 1932: 17-8). In his Manuel Typographique Pierre Simon Fournier (1712-1768) provides us with a vivid description of the activities of this English printer: 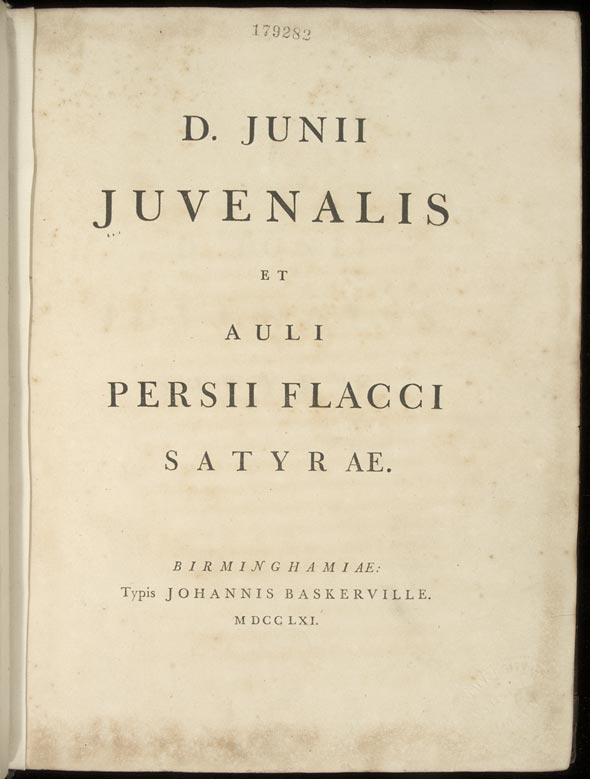 "M. Baskerville, a man of means, has established in Birmingham, his place of residence, which is famous for excellent manufactures in steel, a paper-mill, a printing-press, and a foundry. He has spared neither pains nor expense to bring them to the utmost pitch of perfection. The letters are cut with great daring, and the italic is the best to be found in any English foundry, but the roman is a little too wide. He has already published several works printed in his new letter, and they are veritable masterpieces of clarity. Certain of these are on a glossy paper, and though they are somehow tiring to the eyes, it must be allowed that they are the finest thing yet seen of their kind." (Carter, 1930: 275-6)

Indeed, one of the innovations introduced by Baskerville was to insert each wet sheet—as it left the press—between hot copper plates, providing a perfect gloss and polish. Additionally, he would spend seven or eight years experimenting with designs of type before printing a book. And he also made the ink and supervised the manufacture of paper (Updike, 1927:109). 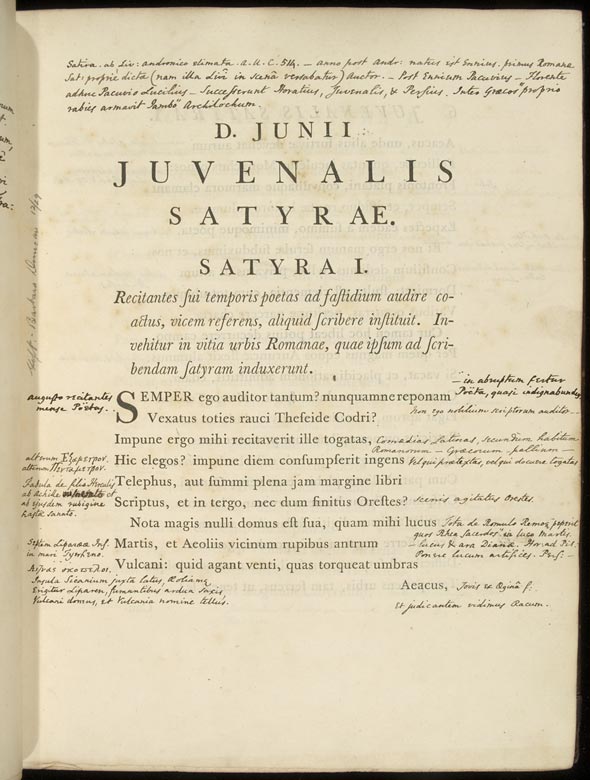 Our copy of D. Junii Juvenalis Satyrae et Auli Persii Flacci Satyrae, published by John Baskerville in 1761, is heavily annotated in Latin. The nature of this marginalia suggests that the owner was a student probably recording the learned comments by a lecturer or tutor—one of the handwritten inscriptions on the front endpaper says: “Eton 1802.” For instance, on the upper margin we read a brief summary of Latin authors who wrote satire. In the text itself, there are glosses such as the definition of the stanza used by Juvenal—an alternating succession of lines of hexameters and pentameters—and the word togata, a term commonly used to refer to Latin comedies:comoedias Latinas, secundùm habitum Romanum—Graecorum—pallium—Vel qui praetextas, vel qui docuere togatas.

While Baskerville invested a large capital to make his books as fine as he could, his standards of textual accuracy were too low. Indeed, today classical scholars would distrust his editions. Despite an unusually large number of cancels—single leaves inserted instead of the original ones—numerous mistakes remained uncorrected (Gaskell, 1959: xxi).

Carter, Harry. Fournier on Typefounding; The Text of the Manuel Typographique (1764-1766) translated into English and edited with notes by Harry Carter. London: Soncino Press, 1930.

Plomer. Henry R., G.H. Bushnell and E.R. McC. Dix. A Dictionary of the Printers and Booksellers who were at Work in England, Scotland and Ireland from 1726 to 1775. Oxford: Bibliographical Society at the Oxford University Press, 1932.