Lewis White Beck (1913-1997) was Professor Emeritus of Moral and Intellectual Philosophy at UR. 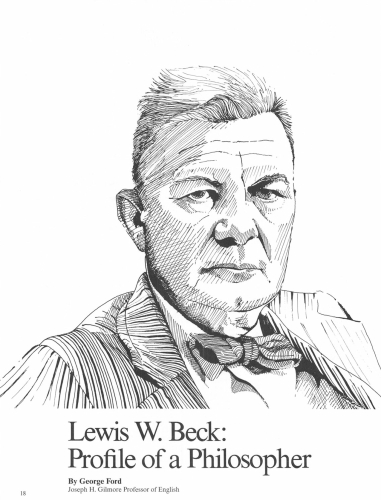 Professor Lewis White Beck (1913-1997) was Burbank Professor Emeritus of Moral and Intellectual Philosophy at the University of Rochester. Many have been written about his career, which all claims to not doing justice to the extensive accomplishments he made. He joined the university in 1949 and served in various administrative positions until his retirement in 1979. Noteworthy is the remark of George Ford, the Joseph H. Gilmore Professor of English in the same university, that Beck contributed to the university with his “encyclopaedic knowledge” and the administrative abilities that he employed in being the dean of the graduate school. Under his leadership, it is noted, the Ph.D. program of the university gained “international recognition”.

Teaching was also at the heart of the Kantian scholar’s career for he was the first recipient of the Edward Peck Curtis Award for Excellence in Undergraduate Teaching in 1962. This teaching excellence is only extended by his regular informal meetings with students after his retirement. Of course Beck was fond of joking about his award in teaching—that the IRS informed him how his prize from the award was not taxable because it was “unearned”

He was most renowned for his works on Immanuel Kant, a German philosopher whose name is hard to miss when studying the history of ideas. Commenting on other philosopher’s works is one thing, and while it also accumulates the collective philosophical knowledge, Beck did not relieve himself from writing essays and books that traverse beyond what Kant had said and done. It is thus a delight that his manuscripts, typed and edited with some editorial notes by the side or even in the text, are available to access in no other than the Rare Book and Special Collection of the university that sustained and benefited from his professorship.

The three boxes in our collection host his typed manuscripts and xerox copies of them. In them one can find not only philosophical insights but also editing history of the later mass-reproduced copies of his works. Some scratches, like those shown in Figure 3, invite curious minds to wonder of his decision to omit, replace, or insert words into the final form.

It was noted by Robert L. Holmes, also a former professor from the university, that “ . . . he had a way of holding the bowl of the pipe in his hand, crooking his thumb up over the top and tamping down the burning ashes—a practice that left his left thumb looking like a piece of burnt cork. Though he later gave them up, he was a man for whom pipes were made” (Essays by Lewis White Beck, 1998, xii). Leafing through his pre-published manuscripts, one can find smudges of black powder (most probably caused by the tamper finger) and a tinge of smoke on the papers. This, and many other side-notes, are great windows to the intellectual process that ran through the renowned philosopher’s mind as he pours earned repository of knowledge and rumination that once dwelt only in the realm of ideas. Fortunately for us, this collection now resides in the library of the institution where his ideas were dispersed, ruminated, acted, and debated extensively.