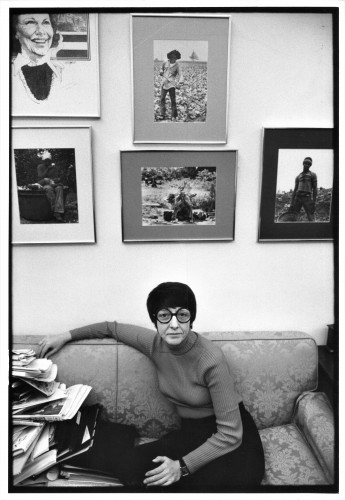 rreverent? I sure am. No, I can’t be reverent to tradition when tradition represents those things that I am totally opposed to”

Margaret “Midge” Costanza was an outspoken feminist, activist, trailblazer, and native Rochesterian. Over the past few months, I have been processing the collection of her papers donated to us by her biographer Doreen Mattingly. The collection contains material spanning much of Costanza’s life, from her early political involvement in Rochester to her time in the White House and her work in California.

Born in LeRoy, New York, Margaret (or “Midge”, as everyone knew her) was raised in nearby Rochester where her family owned and operated a sausage shop. After graduating high school, she started work at a business owned by Rochester real estate developer John Petrossi.

She took an interest in politics from a young age, working on several statewide political campaigns, and in 1966 was named Vice Chair of the Monroe County Democratic Committee. Costanza was elected to the Rochester City Council in 1973 and, despite receiving the most votes, only named vice-mayor (a largely honorary role). 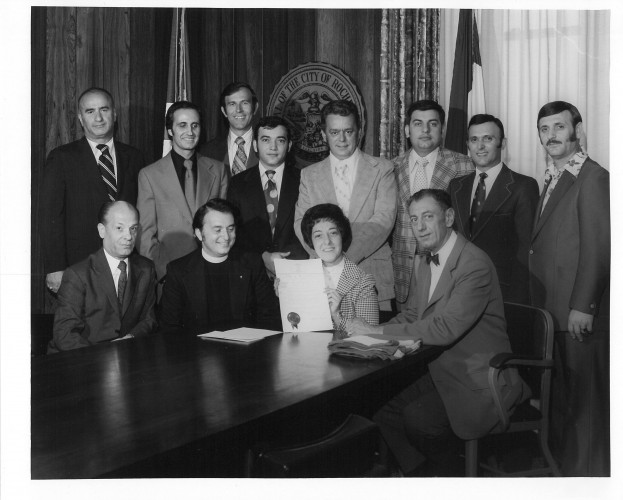 One year later, she ran a failed campaign for Congress against incumbent Republican Barber Conable, where she met former Georgia Governor Jimmy Carter. As she described it in a speech, “I lost a race… but I won a friend.” 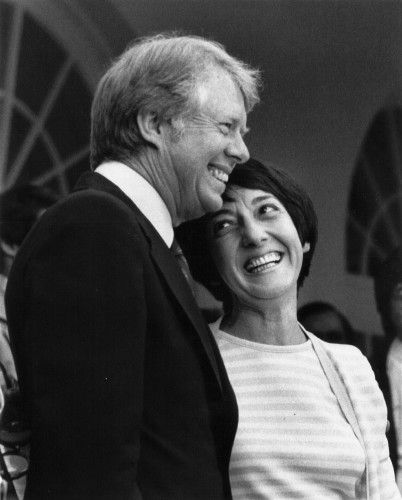 At the Democratic National Convention in 1976, she was chosen to second Carter’s presidential nomination. After he was elected, Carter appointed Costanza as Assistant to the President for Public Liaison, and she became the first woman to hold the position of Assistant to the President. Her office was next to the Oval Office and she was tasked with being the “window to the nation”, and establishing connections between interest groups and the president.

During her time in the White House, she met with hundreds of special interest groups; her controversial meeting with the National Gay Task Force was one of the most notable, being the first instance of openly gay leaders invited to speak at the White House. 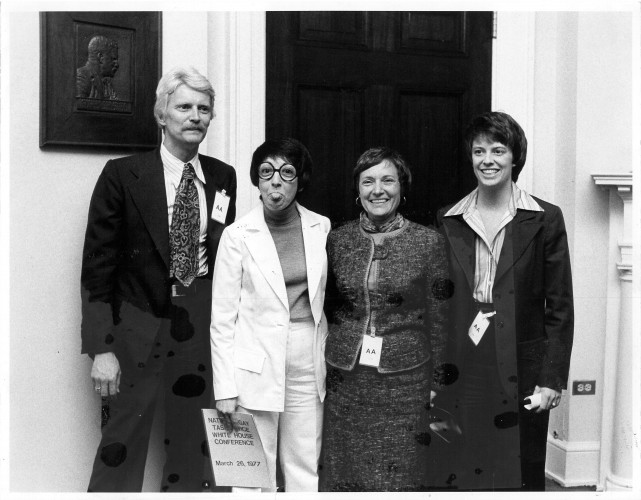 She also fiercely advocated for the Equal Rights Amendment (ERA) and reproductive rights for women. These actions, combined with her outspoken nature and lack of formal education, alienated Costanza from the rest of Jimmy Carter’s circle of advisors (men often referred to as the “Georgia Mafia”).

In April 1978, she was reassigned to a position focusing solely on women’s issues and her office was moved to the basement of the White House. In August 1978, after twenty months in office, she resigned.

Costanza then moved to Los Angeles, staying involved in local politics and working in the entertainment industry. 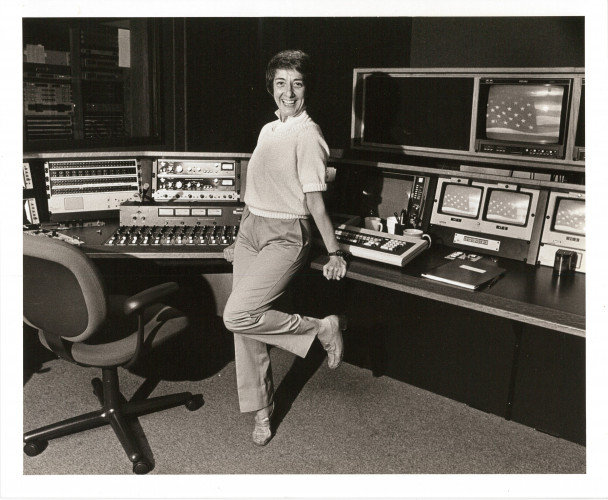 In 1990, she relocated to San Diego and worked on several political campaigns, while remaining an outspoken activist for women’s rights, LGBT rights, and political engagement. 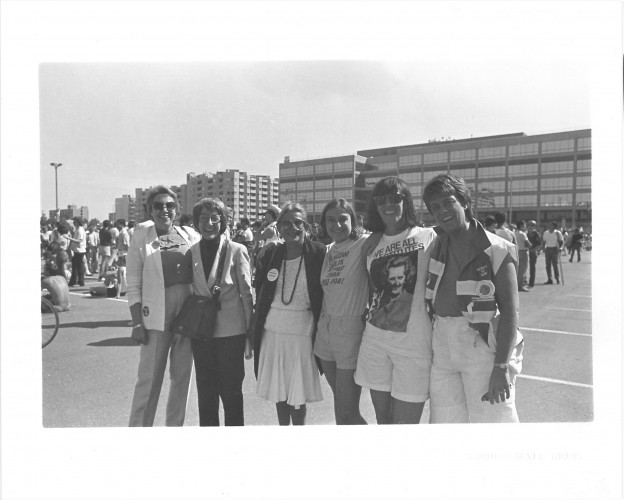 She established The Midge Costanza Institute for the Study of Politics and Public Policy in 2003, with the goal of educating young people on the importance of involvement in government and public service.

Costanza died of cancer in 2010, and was inducted posthumously into the San Diego Women’s Hall of Fame one year later.

When I began work on the Midge Costanza collection, I felt a bit daunted by the sheer volume of material I had in front of me—the collection was given to us in around 25 large record cartons (in varying levels of organization). I began first with a large box of photos, sorting out personal and family photos from photos of her work and activism.

Separating the personal from the political, and then activism from the paid work, remained a difficulty for me when working on this collection. Like most of us, Midge did not always neatly compartmentalize these areas of her life. She was a relatively private person when it came to sharing details of her relationships with the media, but she was also someone who spent her political career outspoken about her opinions and her convictions. Her collection contains material from both spheres of her life, ranging from official government documents to personal correspondence, and even drafts of her unfinished memoirs.

One fascinating part of this collection was Costanza’s collection of newspaper clippings. She kept these in several forms: clipped and organized in folders by date, attached to scrapbook pages, and interspersed within her documents and notes. The volume and the care of storage of these newspapers, and the fact that she held on to them, were indications of how aware she was of her press coverage—the good and the bad.

In addition to her own coverage, she collected material on people close to her causes and those opposed. The collection has several folders closely tracking the political career of fellow outspoken activist Bella Abzug, but also a few folders containing press coverage and interviews with Phyllis Schlafly, an opponent of the ERA, and Anita Bryant, an anti-gay activist. 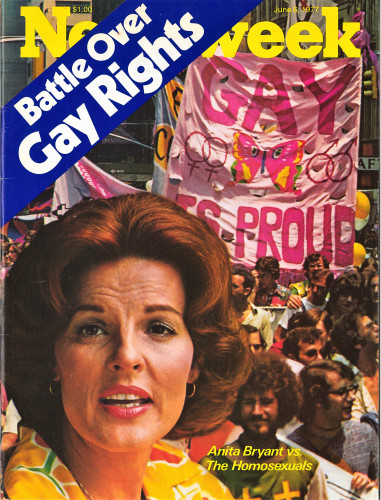 Another interesting aspect of processing was finding small connections to the University of Rochester in various documents. For a fundraiser in 1972, Midge wrote to the University and asked if the thousand dollars she had raised could be used to fund a scholarship for incoming female students interested in studying political science. Additionally, when she campaigned for Congress in 1974, UR political science professor Peter Regenstreif ran her campaign.

Another interesting find was a copy of her 1979 correspondence with former Rare Books librarian Mary Huth, who sent her information on Susan B. Anthony; Midge referred to Anthony in her letter as “a woman whose accomplishments make Babe Ruth’s home run record minuscule in comparison”.

Midge saved a lot of her notes and writing along with official documents, and these often provided interesting insights into her personal life and how she reacted to her political environment. She spent much of her time in California working on various drafts and titles of the memoir she wanted to publish about her time in politics, and these provide valuable insights into how she wanted people to remember her, and how she reflected on the experience of working for Jimmy Carter. Unfortunately, a memoir was never published, but Doreen Mattingly did publish a biography of Midge, A Feminist in the White House, in 2016.

Much of the official material from her White House years is housed at the Jimmy Carter Library, but we have her personal writing from this time—several folders contained drafts of her resignation letter to Jimmy Carter. She discusses the emotionally draining experience of resigning in her memoir drafts as well, but to see the sheer volume of writing she produced reveals what a painstaking process it was for her. In her many notes, we can see that she struggled to find the words to express her frustration with Jimmy in a way that struck a balance between subordinate and friend. One draft begins with, “Jimmy, I want to go. I really do.  I’m not happy here any longer.” Other drafts are worded more formally, but devolve into statements such as “your problem is that you can’t deal with women on the same level as you deal with men.”

In her notes from this time, we see her struggling with exactly how to resign. New York's Lieutenant Governor Mary Anne Krupsak had resigned just a month earlier, and Midge was aware of how the media had portrayed her as merely “another woman leaving in a snit.” This was the last thing she wanted, and to avoid it, she did everything she could to remain sincere and dignified throughout her resignation, admitting frustration with the situation but avoiding any outbursts or comments that could be used to portray her as bitter or overly emotional. In the end, most of the resignation press coverage acknowledged her circumstances as unfair, and even though many were critical of her outspoken nature, they presented the situation with some sympathy. 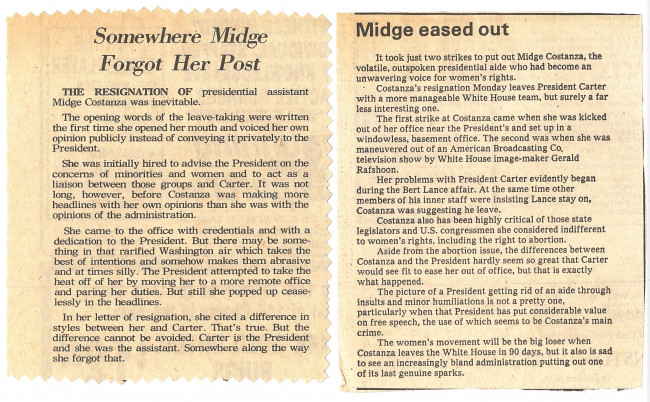 Midge Costanza also collected interviews that conducted with other staff and even some of the assistants that worked with her in the White House. In some of these interviews, we see a different perspective, with other people revealing some of her weaknesses and insecurities.

Costanza was very aware of the fact that she lacked the formal education of her peers and even the younger aides that worked for her. Seymour Wishman, a deputy assistant in the office of Public Liaison, noted in his interview “she seemed to be very self-possessed and self-confident, yet there were moments in conversation where she would allow great insecurities and unsureness of herself.” Joyce Starr, who worked as an associate special assistant under Costanza, stated in her White House exit interview “Midge Costanza did not like her staff to look better than she—to have visibility, for example.” Joyce’s interview also reveals the confusion that was part of Midge’s position from the beginning, and acknowledges that much of it was out of Midge’s control.

Over the past few months, it’s also been amazing to read others’ stories, but meet with people who knew Midge; so much can be learned about a person just through what they saved and collected, and hearing people speak about Midge’s character and personality helps to reinforce everything I learned while processing.

After spending my summer working with this collection, I have definitely learned a lot about Midge, and I believe that this collection has a lot to offer. It provided me with valuable insights into a trailblazing woman who was still made to feel like an outsider for her beliefs, and the political climate that made her activism necessary. Most people do not know of Midge Costanza, despite her many firsts, and I am hoping this collection will work to change that. 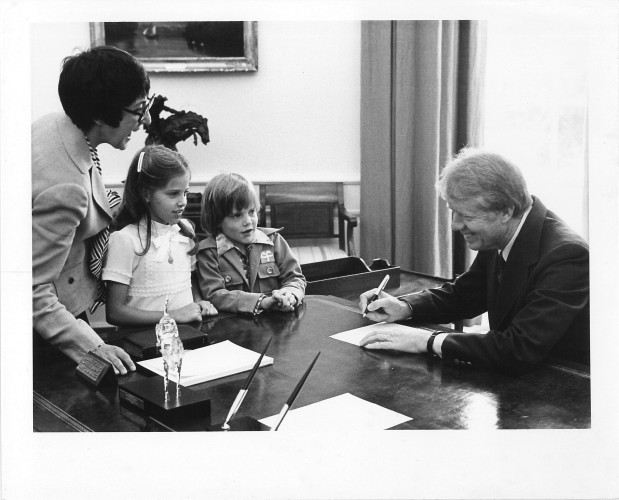