RBSCP’s new exhibit examines ephemera, offering insights into what has been kept, and how it can be used today. 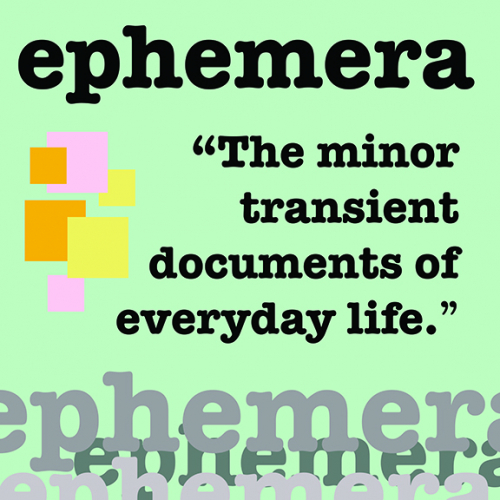 RBSCP’s new exhibit, Ephemera: “Minor Transient Documents of Everyday Life” examines ephemera from across our holdings, offering insights into what has been kept, and how it can be used today. These items, originally created for temporary use, were often not created to be meant to be saved, yet ephemera is everywhere in archives and special collections libraries. And researchers of all kinds have found ways to use these materials in a wide variety of ways in a whole range of topics.

It was historian and author of the Encyclopedia of Ephemera, Maurice Rickards, along with others, who elevated ephemera to an academic discipline and encouraged the preservation of ephemera in libraries such as our own. The seed of Rickards work, and the work of those before him led to the formation of the Ephemera Society in London in 1975, and became a world-wide movement of collectors, archivists, curators, bibliographers, typographers, and scholars, not to mention those who love flea markets and yard sales, in uncovering these fascinating scraps of history.

The new exhibit, Ephemera: “Minor Transient Documents of Everyday Life” organizes ephemera by broad topic and form, dedicating spaces within the department to showcase broadsides, postcards, almanacs, trading cards, stationary, and many other materials culled from our collections. It is a unique glimpse into history through the lens of everyday objects, ones which were never meant to stand the test of time. Despite this, or perhaps because of it, ephemeral objects offer uniquely personal insights into bygone eras through print materials; because they were merely the byproduct of everyday life, they have a lot to share about what normal life was like in their time. Jokes and scribbles on the backs of postcards and in the margins of recipes are just as telling as the original printed text of these documents, and often these spontaneous additions suggest more than anything why they may have been saved, whether they were intentionally archived as relics of a bygone era or accidentally preserved.

We encourage you to come explore the exhibit in person when you get a chance. We are located on the second floor of Rush Rhees in the RBSCP department. Until then, here are some highlights of especially interesting ephemera which are display! Because there are some repairs going on in the department right now, some of the exhibit is not currently on display but will be installed in the next few weeks.

Although the exhibit primarily focuses on ephemera from the 19th and 20th century, it also features a few pieces of pre-modern ephemera. On display are medieval documents which demonstrate just how far back ephemera can be traced. These include a 15th century German relief print and 9th century French missal fragments. Relief prints, such as woodcuts, were one of the earliest ways to produce multiple copies of a single image. Very few woodcuts from the early fifteenth century still exist, and even fewer remain where their original users placed them. The colored woodcut on currently display, which depicts the death of the Virgin Mary, is an exception. In the early fifteenth century, it was pasted to the inside cover of a heavily used manuscript copy of the popular German religious text Der Stachel der Liebe, allowing it to be preserved for centuries. Woodcuts like these are considered ephemeral because they were meant to be kept with the user, being folded, carried around, and even kissed as a sign of religious devotion they went about their day.

Also on exhibit are examples of medieval binding waste and missal fragments. For as long as books and manuscripts have existed, bookbinders have crafted new books with the scraps from unwanted and damaged volumes. This reused material is called binding waste, and the few preserved pieces we have today can lead to discoveries of forgotten or long-lost texts that may have fallen out of fashion. Its study can also shed light on the circulation and use of particular texts and book formats, and how users valued certain genres, authors, and textual traditions.

The six strips of parchment currently on display are from the same bifolium, or page opening. At some point, this ninth century liturgical manuscript was cut up, and the strips were incorporated into the spine of another book in order to reinforce it. Materially speaking, parchment is generally sturdier than paper, making it particularly useful for strengthening book spines and reinforcing the covers, or boards, of a book. The strips would have remained hidden until the second book was either rebound or broken up to be recycled itself.

Although they may be materially more stable than ration cards, receipts, or binding waste, another form of ephemera especially relevant to library collections is the serial edition. In the 18th and 19th centuries, it was common for novels and other long volumes to be published gradually in newspaper or small, chapter by chapter pamphlets. The Federalist Papers, Uncle Tom’s Cabin, Little Women, and Bleak House are just a few examples of the many books which were published in this manner. Unlike the gilt, tightly bound collector’s editions, the serialized editions are printed like magazines or newspapers, read, shared, and often worn out and discarded rather than kept.  Our serialized first edition of Charles Dickens’ Bleak House is a great example of how these stories were originally circulated to readers.

Another category of ephemera on display is culinary ephemera. There is nothing quite as uniquely ephemeral as food. A meal that is eaten one night and then gone forever also renders its menu ephemeral, gone, and sometimes forgotten as soon as the meal is over. In the exhibit case dedicated to culinary ephemera there are day-by-day meal plans, menus for special dinner events, a collage of handwritten and cut out recipes in a 19th century commonplace book, and even a World War II ration book. A card from the ration book, seen below, offers a glimpse into what life was like for Americans during the second world war. The family to whom these ration cards were issued saved them after the war as a memento of those challenging times, and offers us a deeper understanding of what life was like during wartime.

Those with a special interest in University of Rochester history will find ephemera, culled from the University Archives, in the many forms they are seen throughout the exhibit. There are menus from memorable university events, postcards, bookplates, songsters, almanacs, political pins, sports ephemera, and even matchbooks.