Our Collection Highlight is the 1632 folio edition of Sandys' translation, which would become the model for subsequent 17th century editions 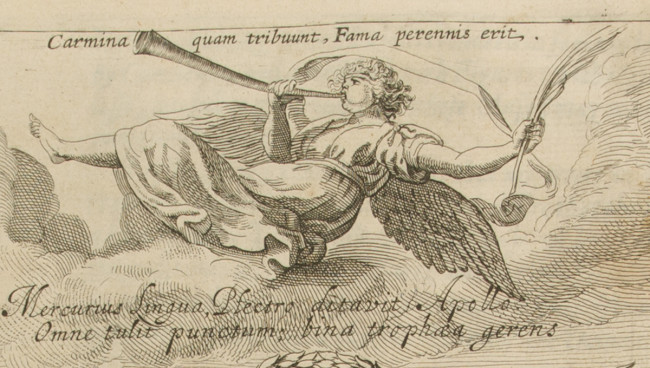 George Sandys (1578-1644), writer and traveler, originally published his translation of the first five books of Ovid's Metamorphosis, from Latin hexameters to English heroic couplets,
in a small duodecimo in 1621. In particular, we know that the publishing plans for this work had been duly entered in the registers of the Stationers' Company to Matthew Lownes and William Barret on April 27, 1621: 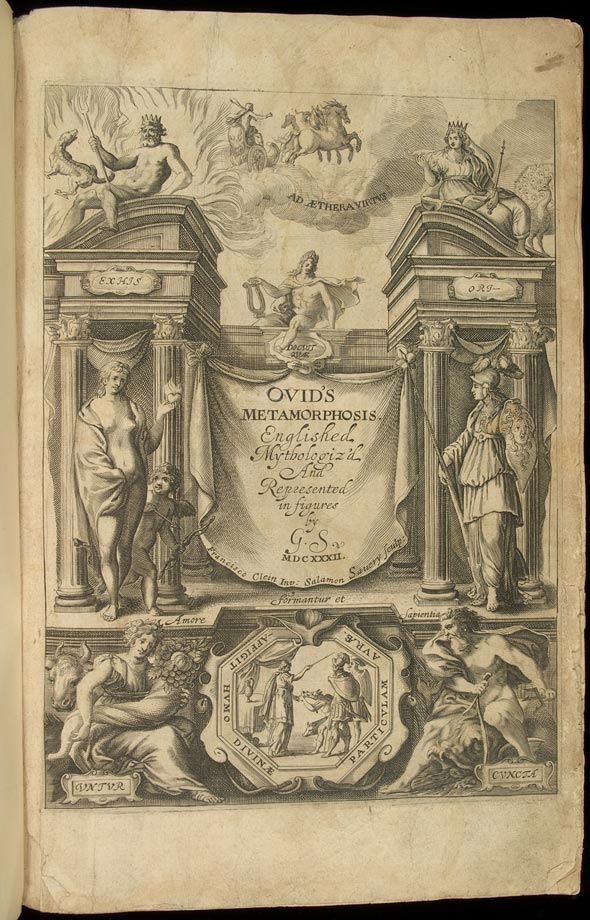 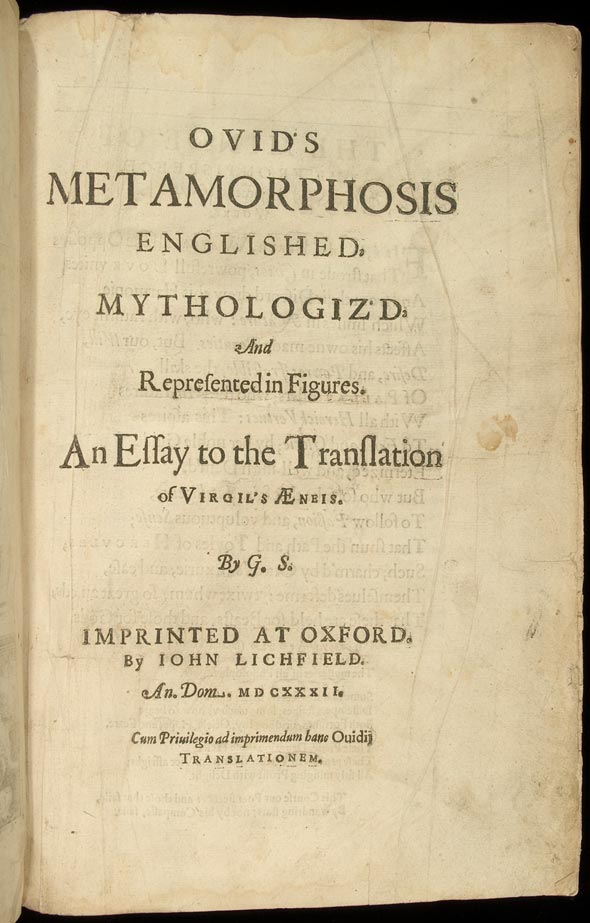 Shortly after the 1621 publication, George Sandys left for Virginia. The Virginia Company, then managed by George Sandys' brother, Sir Edwin Sandys (1561-1629), and by the earl of Southampton, had appointed Sandys treasurer for the colony, member of the council of state in Virginia, and member of his majesty's council for Virginia in London. Sandys sailed in July 1621, reaching Jamestown in October. In a letter addressed to Samuel Wrote and dated March 28, 1623, Sandys recalled how two other books of the Metamorphosis were translated on the voyage to the colony:

Yet amongst the roreing of the seas, the rustling of the Shrowdes, and Clamour of Saylers, I translated two bookes, and will perhaps when the sweltring heat of the day confines me to my Chamber give a further assaye. for wch if I be taxt I haue noe other excuse but that it was the recreaĉon of my idle howers, and say with Alciat.

Moreover, his friend Michael Drayton (1563-1631) must have been impressed by the translation of these five books as he encouraged Sandys to continue his English version in an enthusiastic panegyric entitled "To Master George Sandys Treasurer for the English Colony in Virginia." Here is the relevant passage from this poem:

And (worthy GEORGE) by industry and use,
Let's see what lines Virginia will produce;
Goe on with OVID, as you have begunne,
With the first five Bookes; let your numbers run
Glib as the former, so shall it live long,
And doe much honour to the English tongue (Hebel, 1932: 3, 207).

The Crown dissolved the Virginia Company in 1624. Although James I reappointed Sandys to the colony's council, he finally returned to England in 1625. In that same year, the first edition of the fifteen books of Ovid appeared in a small folio format: Ovid's Metamorphosis Englished by G. S. (London: [William Stansby], 1626); (STC, 2ndedition: 18964). For April 3rd the entry in the registers of the Stationers' Company states that Ms. Barret assigned to Master Parker the right to publish a series of titles, including "OVIDS metamorphosis in English verse by GEORGE SANDS":

Assigned ouer vunto him by mistris Barret and by Consent of a Court holden this day all her estate right title and Interest in the Copies following...XVs (Aber, 1877, 4, 157-8).

However, the publication was ultimately carried by Master Stansby, as shown in the Stationers' Company's record for May 7th:

To make things more complicated, on April 24th Charles I had granted Sandys exclusive rights to publish this translation for twenty-one years (Rymer, 1743: Vol. 8, 2, 44-5). This is the reason why the title page of the 1626 edition does not include the name of the publisher or printer but simply the note "cum privilegio". However, an unauthorized edition would be published in 1628: Ovid's Metamorphosis Englished by G. Sandy (London: Robert Young and I. Grismond, 1628); (STC, 2nd edition: 18965). Certainly, one may first wonder about the publisher's legal justification to undertake this project. Obviously, he must have known about the royal privilege assigned to Sandys! On April 10th, 1627, Thomas Lownes had inherited his father's rights on a number of books, including Sandys' Ovid:

Entred vnto him for his Copies by Consent of a full Court holden this day all the estate right title and Interest which Mathew Lownes his father deceased had in the Copies hereafter mencioned, saveing to euery man his and euerye of their rightes to them or anye of them (Aber, 1877: 4, 176).

On May 30th all Thomas Lownes' books were transferred to Humphrey Lownes and Robert Young, and Thomas Lownes went out of business:

Assigned ouer vnto them and by Consent of a full Court all the estate right and Interest which he hath or had in the Copies hereafter mencioned (Aber, 1877, 4, 180-1).

Clearly, the new owners of Ovid's "copyrights" simply decided to make quick profits by re-issuing the 1626 edition in a cheap version without even consulting with the translator. As a result the 1628 version is a modest duodecimo and, overall, a crude imitation of the 1626 edition. Sandys, who was probably already preparing an expanded, and corrected, edition of his translation, did everything possible to stop the printing of this piracy. In fact, he managed to obtain a court verdict in his favor, as recorded in The Stationers' Court records:

This day mr Sandes Patent for the sole printing of the 15 bookes of Ovides Metamorphosis by him translated into English verse was openlye reade in the hall this quarter day. And it is ordered that th'entrance to mr. Barret and mr. Lownes deceased of the first five books and the assignmt to Robt Younge, And the Entrance of the 15. Bookes to mr Stansby shalbe all Crost out of the Regester Booke of the Company for that noe man shall laye anie claime to the printinge of the same or any pte thereof (Greg, 1957: 201). 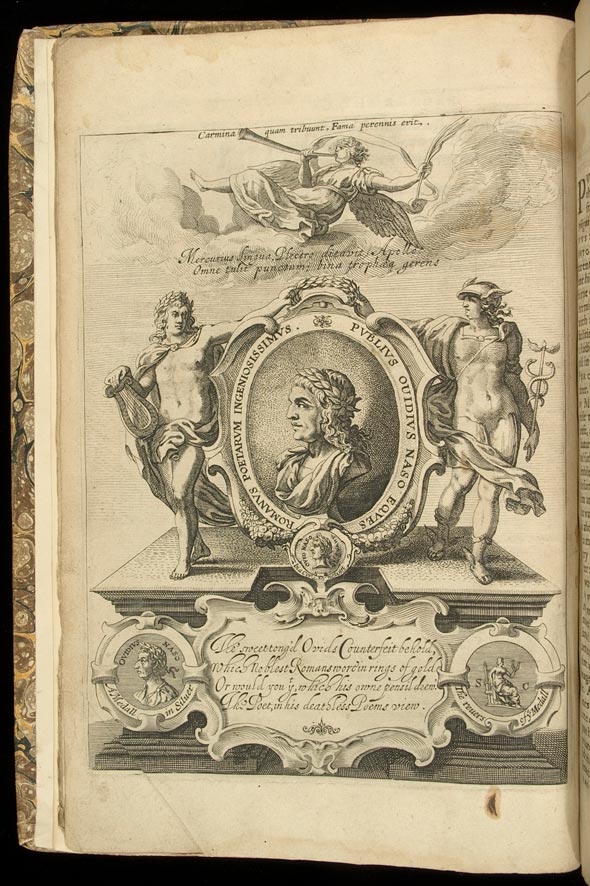 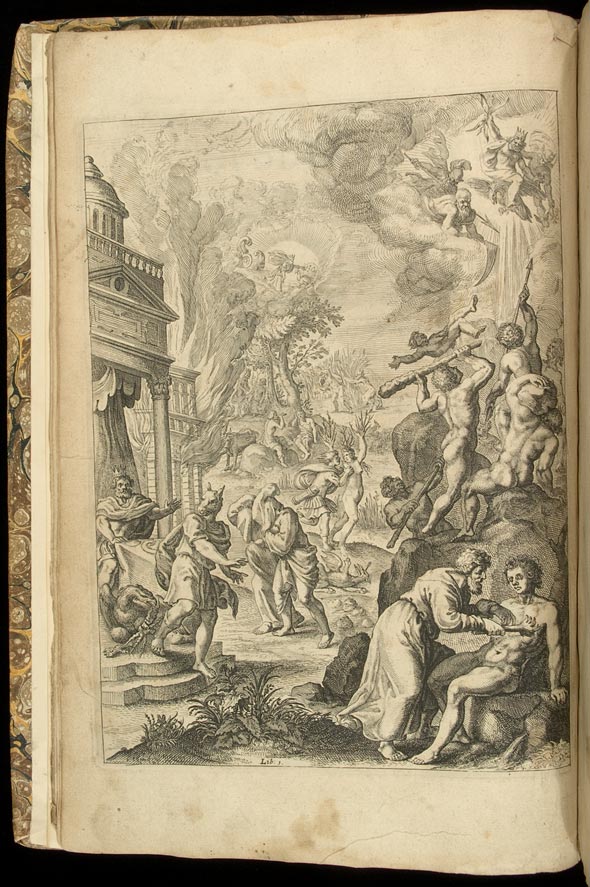 Our Collection Highlight is the 1632 folio edition of Sandys' translation (STC, 2nd edition: 18966), which, in fact, would become the model for subsequent editions published through the seventeenth century. Sandys heavily revised his previous 1626 version, not only improving the quality of the translation but also adding numerous erudite glosses, most of them designed to explain unfamiliar words to the "mere English Reader." In the preface "To the reader" of the 1626 edition, Sandys had already expressed his desire to include these scholarly commentaries in the margins. However, as he himself stated," the hastiness of the Presse, an vnexpected want of leasure, haue preuented me". Conversely, in the 1632 edition, the commentaries occupy almost as much space as the poem itself. Furthermore, the 1632 edition is elegantly illustrated with fifteen one-page copperplate engravings, each of them inserted at the beginning of each book of the Metamorphosis. These plates were designed by Francis Clein (d. 1658) and engraved by Salmon Savery. 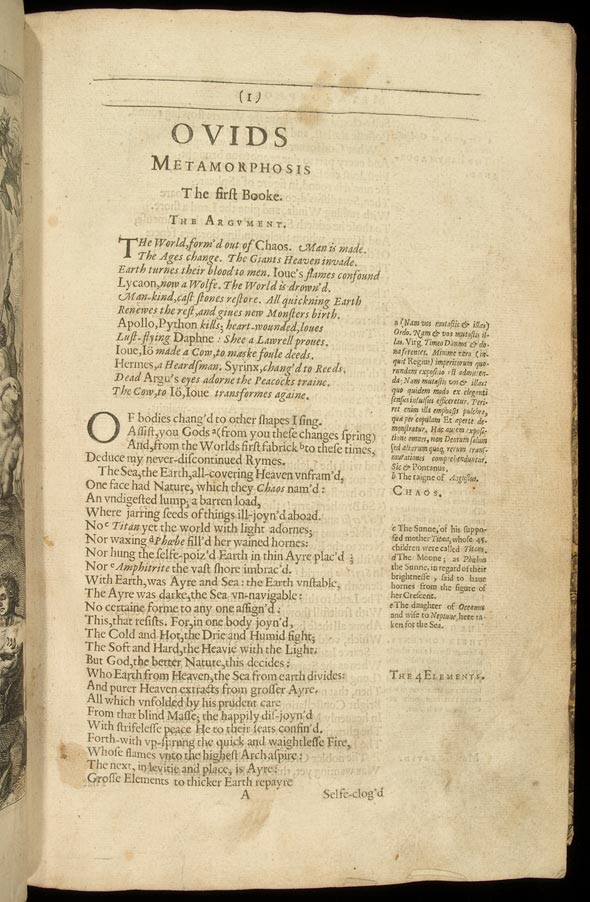 It is interesting to note that Sandys viewed his translation of Ovid as being intimately linked to his experience in the New World. He already expressed this opinion in his dedication to King Charles I, first included in the 1626 edition and, except for the addition of a brief reference to the glosses, again reproduced in 1632. Below I have transcribed one of the most moving passages of this short panegyric:

It needeth more then a single denization, being a double Stranger. Sprung from the Stocke of the ancient Romanes; but bred in the New-World, of the rudenesse whereof it cannot but participate; especially having Warres and Tumults to bring it to light in stead of the Muses. But how ever unperfect, Your favour is able to supply; and to make it worthy of light, if you iudge it not unworthy of your Royall Patronage. To this haue I added, as the Mind to the Body, the History and Philosophicall sence of the Fables (with the shadow of either in Picture) which I humbly offer at the same Altar, that they may as the rest of my labours, receiue their estimation from so great an Authority. Long may you lieu to be, as you are, the Delight and Glorie of your People: and slowly, yet surely, exchange your mortall Diadem for an immortal. So wishes
Your Maiesties
Most humble
Seruant
George Sandys.

Moreover, the impact of the Virginian experience can be seen even in the content of some of the glosses. For instance, in book 15, page 497, to the following translation,

Sandys adds: "Such have I seene in America". 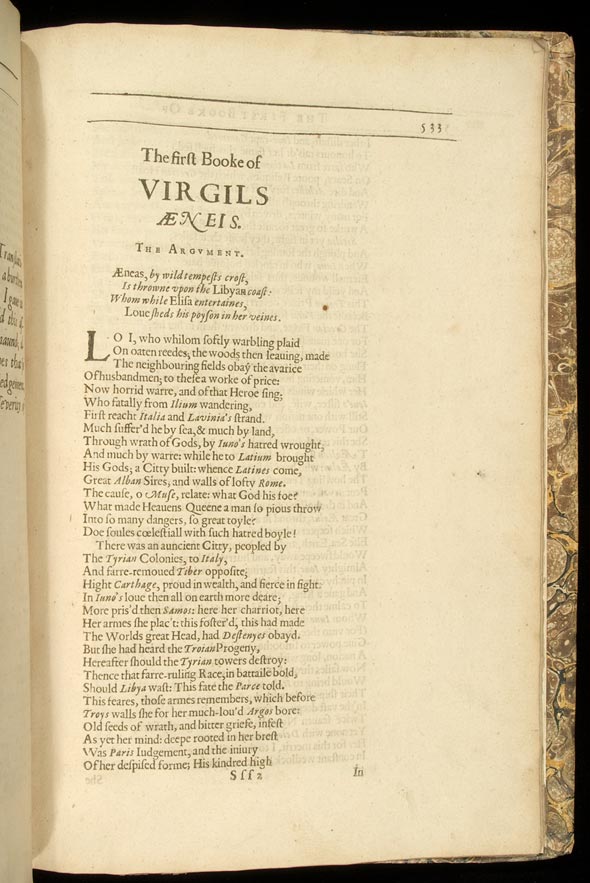 An important novelty of the 1632 edition is the addition of the first book of the Aeneid at the end: "An Essay to the Translation of Virgil's Aeneis." With this insertion, Sandys is implicitly establishing a connection between Virgil and the colonization of Virginia. Indeed, the Renaissance reader would have easily detected this link. For instance, in his Historia regum Britanniae, Geoffrey of Monmouth (d. 1154/5), bishop of St Asaph and historian, had already told the legend of how the English nation was descended from one of the survivors of Troy, Brutus, and, therefore, why the English were the providential heirs of the Roman Empire. Therefore, for seventeenth-century readers, Virgil's epic, in which the hero Aeneas' destiny is to found Rome and her empire, worked as a perfect ideological allegory to justify the creation of an English Empire in the New World (Ellison, 2002: 101-109).

Furthermore, by translating Ovid and Virgil Sandys joined a long tradition of English humanists who were determined to make the vernacular language a suitable vehicle to express the thought of the ancients. For example, a question for debate among English intellectuals was whether the language of the rising English nation was actually prepared to meet this challenge. As noted above, the poet Michael Drayton was hopeful that Sandys would honor the English tongue, and, as anticipated in his preface to the reader, Sandys expected that his translation could match the intellectual prestige of Latin, or even of other vernacular languages like French and Italian:

To this I was the rather induced, that so excellent a Poem might with the like Solemnity be entertained by vs, as it hath beene among other Nations: rendred in so many languages, illustrated by Comments, and imbelished with Figures; withall, that I may not proue less gratefull to my Autor, by whose Muse I may modestly hope to be rescued from Obliuion (Sandys, 1632: π5).

In fact, John Dryden would acknowledge Sandy's talent as a translator in his preface to his Fables Ancient and Modern; Translated into Verse from Homer, Ovid, Boccace, & Chaucer: with Original Poems (London: Jacob Tonson, 1700). When explaining the reason for choosing to translate books twelve and fifteenth of Ovid's Metamorphosis, he says the following:

and this, I may say without vanity, is not the Talent of every Poet: He who has arriv'd the nearest to it, is the Ingenious and Learned Sandys, the best Versifier of the Former Age; if I may properly call it by that Name, which was the former Part of this concluding Century (Dryden, 1700: *A1r).

Davis, Richard Beale. "Early Editions of George Sandys's "Ovid": The Circumstances of Production." The Papers of the Bibliographical Society of America (35, 1941): 255-80.

________. George Sandys, Poet-Adventurer; A Study in Anglo-American Culture in the Seventeenth Century. London: The Bodley Head, 1955.

McManaway, James G. "The First Five Books of Ovids Metamorphosis, 1621, Englished by Master George Sandys. Papers of the Bibliographical Society of the University of Virginia (1, 1948-9): 71-82.