Papworth benefited from the commercial and industrial boom during the period following the end of the Napoleonic wars (1793-1815). 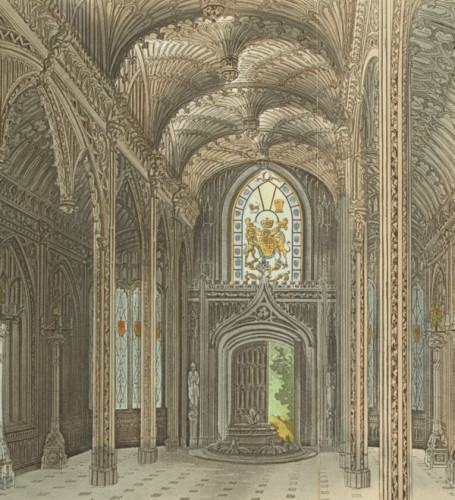 John Buonarotti Papworth (1775-1845).
Select Views of London; With Historical and Descriptive Sketches of Some of the Most Interesting
of Its Public Buildings. London: R. Ackermann, 1816. 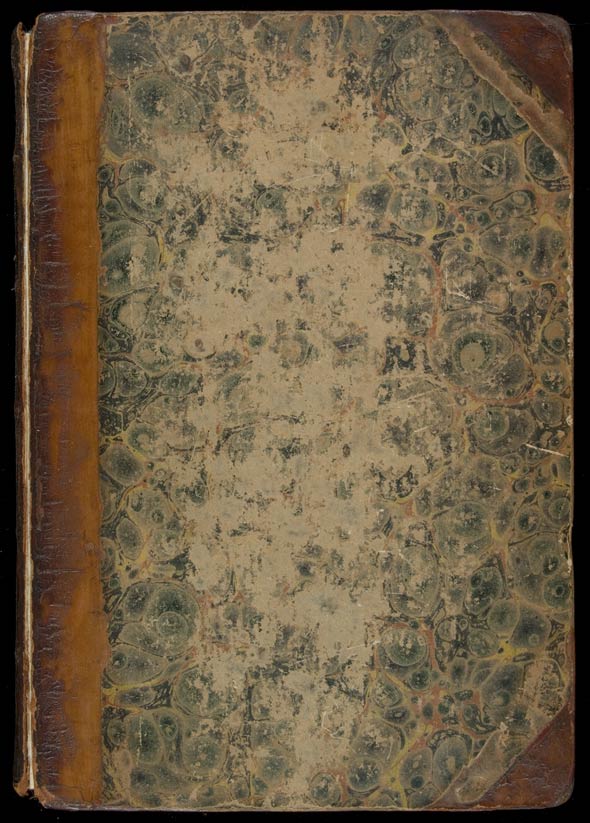 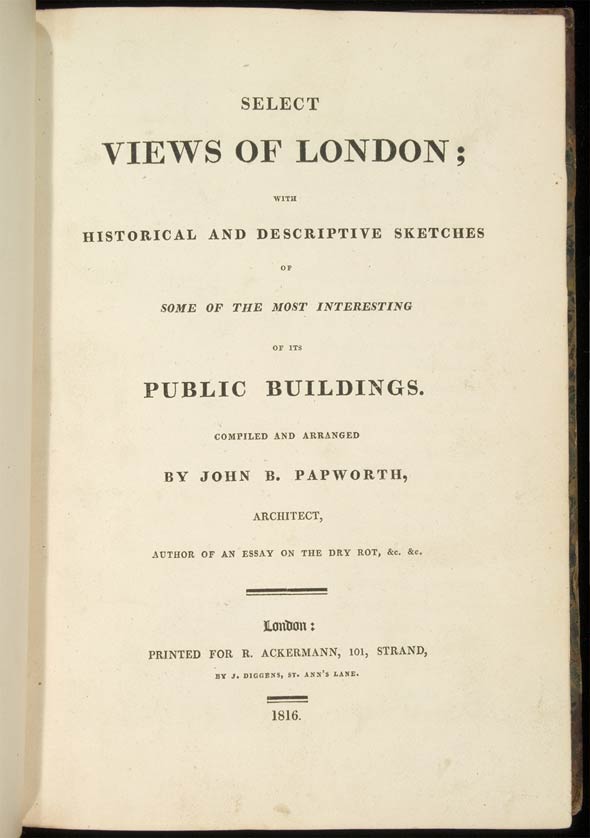 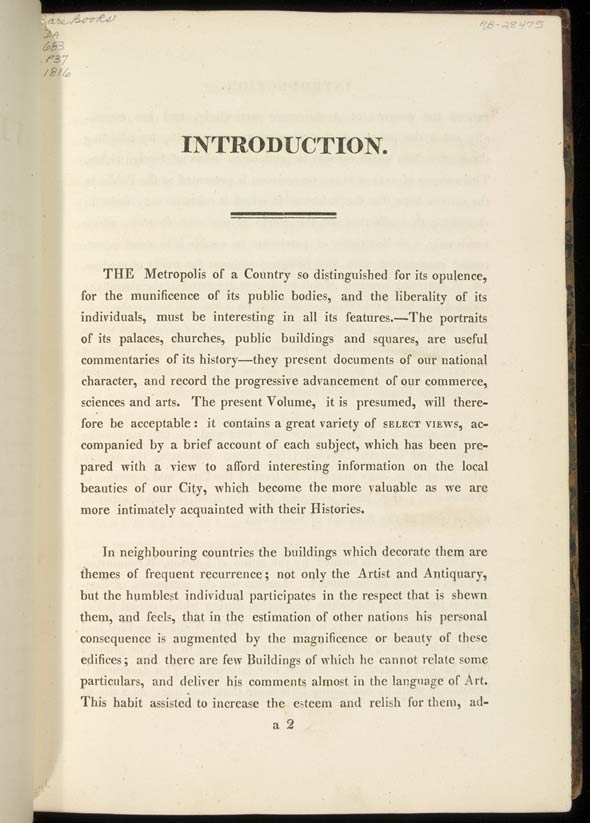 The artistic skills of the young John Papworth were first spotted by Sir William Chambers (1722-1796), who encouraged him to pursue architectural studies instead of the medical career originally planned by Papworth’s parents. Apart from the design of buildings, Papworth would excel in other branches of architecture such as town planning, the remodeling of houses, landscape architecture, furniture design, and interior decoration. For instance, he worked with three of the leading design firms of London: John Blades, glass manufacturer, of Ludgate Hill; George Morant, decorator, of New Bond Street; and W. and E. Snell, cabinetmakers, of Albemarle Street. Papworth also introduced innovations in design such as the use of cast iron as roof support, and the severed column, which was first employed as a sepulchral monument and erected at Waterloo to commemorate the death of Colonel Gordon of the Highland regiment in 1815. The erection of this tropheum gained Papworth the appellative of “Buonarotti” among his friends.

Working during the period immediately following the end of the Napoleonic wars (1793-1815), Papworth greatly benefited from the commercial and industrial boom of those years. His clients belonged to a new emerging industrial bourgeoisie consisting of bankers, factory owners, and businessmen. For them, Papworth designed estates and business premises, including their interior decoration, furniture, and garden landscaping. In terms of fashion, the work of Papworth is an excellent example of the artistic taste of the first decades of the nineteenth century, which marked the transition between the late Georgian and early Victorian periods.

Papworth’s Select Views of London is profusely illustrated: it contains 76 leaves of hand-coloured aquatint plates depicting historical building and house interiors of the city of London. Essentially, this title is a reprint of Papworth’s contributions to the monthly periodical, The Repository of the Arts, Literature, Commerce, Manufactures, Fashions and Politics (London, 1808-1828), published by Rudolph Ackermann (d. 1868). The aim of The Repository of the Arts was to provide a higher quality alternative to other serial publications like The Gentleman’s Magazine and The European Magazine, and London Review, which printed notices of current art exhibitions and books, reviews of fashion, and a wide range of literary contributions. Ackermann’s publication contains illustrations of superb excellence representing numerous techniques, especially line, stipple, aquatint, woodcuts, and lithography. Overall, Select Views of London is a vivid testimony of the high standards of this monthly publication, which reached 3,000 subscribers by the end of the first year (1808). 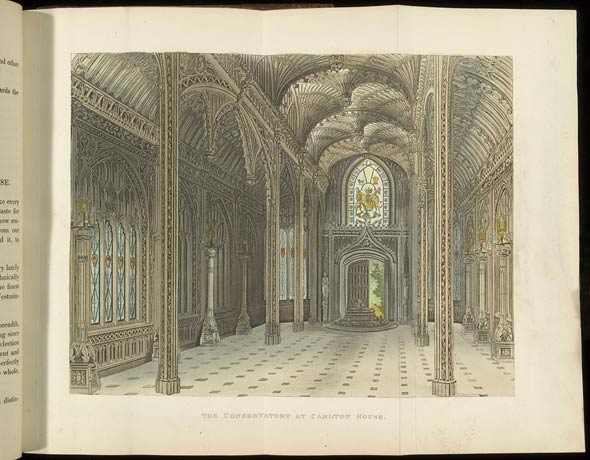 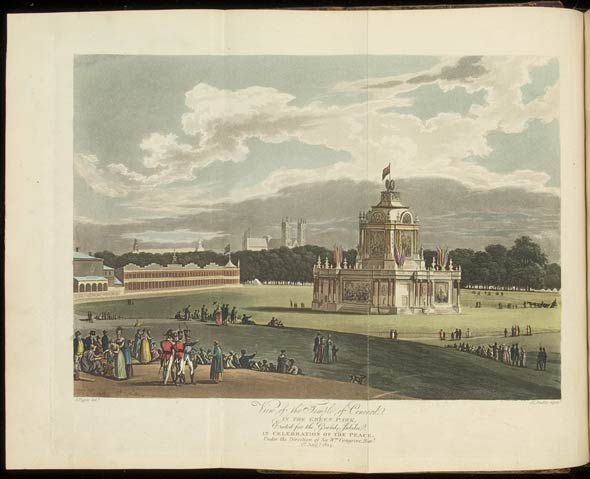 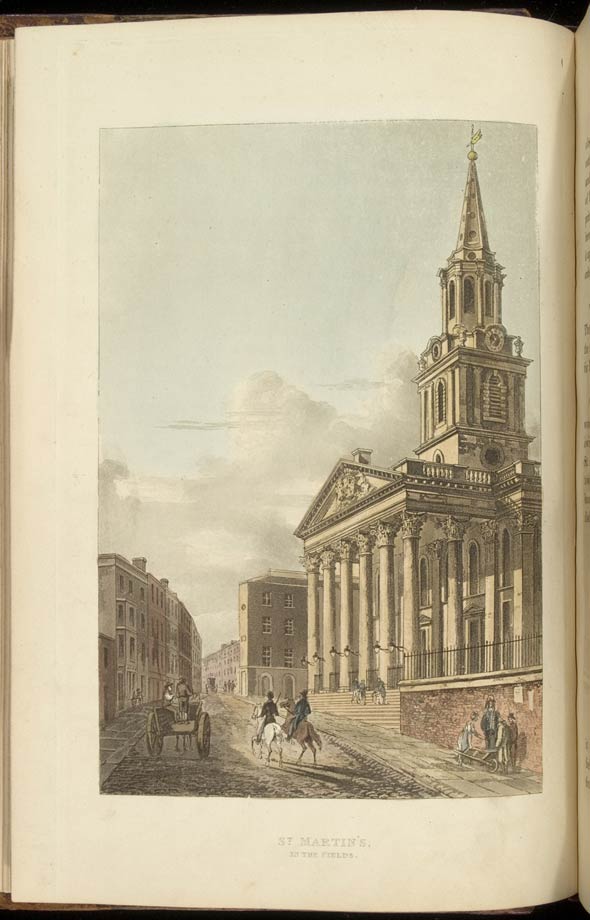 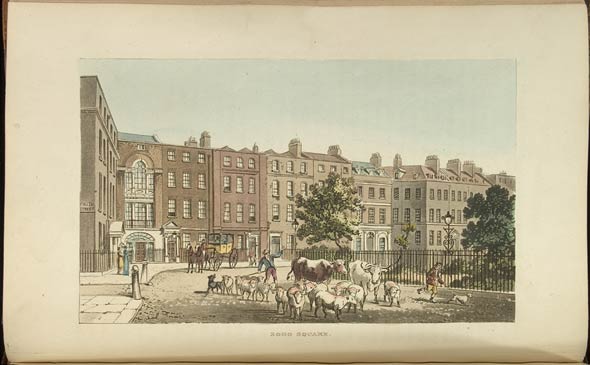 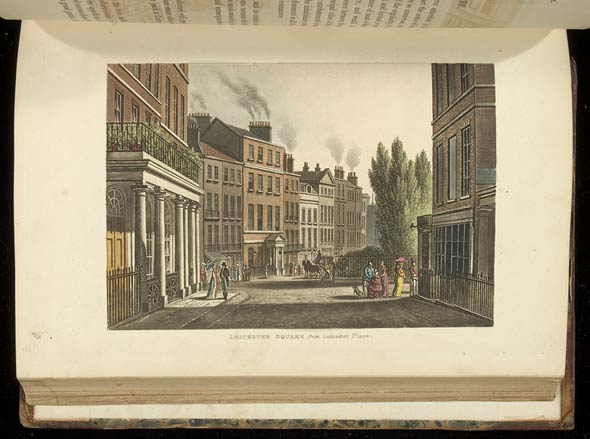 Like other artists of this period, Papworth soon realized that publication was essential for his professional success. To the title featured this month, we may add four other important publications: Along with George Ernest James Wright, he wrote Essay on the Causes of the Dry Rot in Buildings; Contained in a Series of Letters Addressed to G.E.J. Wright, Esq. Including Some Observations on the Cure of the Dry Rot, and on the Admission of Air into the Parts of Buildings Affected by That Disease (London: The author, 1803); Rural Residences: Consisting of a Series of Designs for Cottages, Small Villas, and other Ornamental Buildings, Accompanied by Hints on Situation, Construction, Arrangement and Decoration, in the Theory & Practice of Rural Architecture; Interspersed with some Observations on Landscape Gardening (London: Printed for R. Ackermann, by J. Digens, 1818); Hints on Ornamental Gardening: Consisting of a Series of Designs for Garden Buildings, Useful and Decorative Gates, Fences, Railroads, &c.: Accompanied by Observations on the Principles and Theory of Rural Improvement, Interspersed with Occasional Remarks on Rural Architecture (London: Printed for R. Ackermann, by J. Digens, 1823). Papworth also wrote an essay on the principles of design in architecture to be included in the fourth edition of Sir William Chambers’s A Treatise on the Decorative Part of Civil Architecture: Illustrated by 53 Plates Engraved by Rooker, Fourdrinier, Grignion (London: J. Taylor, 1826).

Finally, the wide range of Papworth’s professional activities offers a striking parallel to the life-long occupation as well as intellectual interests of Elizabeth G. Holahan (1903-2002), the former owner of our copy.

Abbey, J. R. Scenery of Great Britain and Ireland in Aquatint and Lithography, 1770- 1860, from the
Library of J. R. Abbey; A Bibliographical Catalogue. London: Curwen Press, 1952.

Tooley, R. V. English Books with Coloured Plates, 1790 to 1860; A Bibliographical Account of the
Most Important Books Illustrated by English Artists in Colour Aquatint and Colour Lithography. London: Batsford, 1954.