The Dutch scholar Pieter Burman (1668-1741) published an edition of Phaedrus' Fables in an octavo format in Amsterdam in 1698. 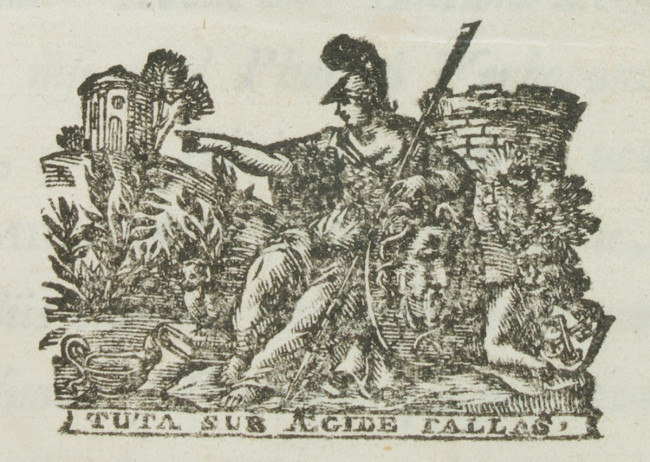 Our Collection Highlight is an example of what book historians describe as a "prize book", which was awarded to the best student of a particular class. The distribution of this type of prize spread quickly from the sixteenth century onwards, and they were given in Latin or Grammar Schools, places where classical languages and literature were taught intensively. These institutions were often financed by the city, or they could also be independent; they could be run by a religious order in the Catholic districts, the Jesuit schools being a good example of them, or by local churches in regions under the influence of the Reformation (Coppens, 2004: 53-60). 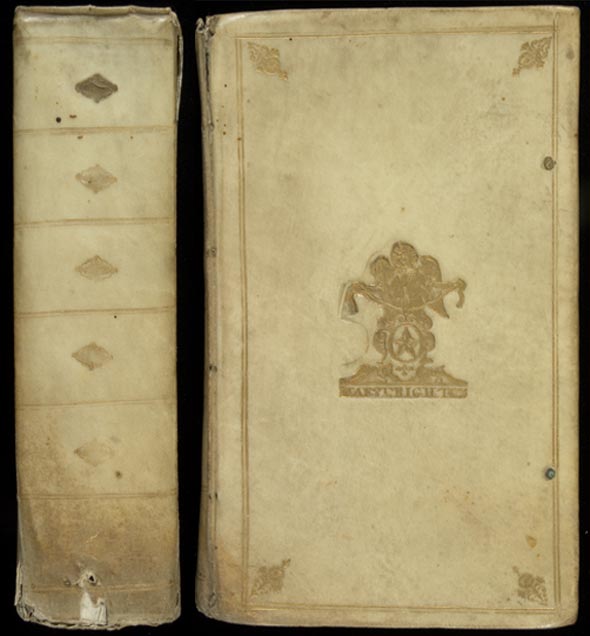 While an old book with its original binding could be recycled to serve as a prize book, a very common practice during the first three centuries of printing history was the commission of a special binding for this purpose. In fact, our Collection Highlight shows a kind of prize binding that became widespread in the Northern Netherlands: Gold-tooled vellum with a coat of arms of the city funding the prize. In this case, it is the city of Maastricht (Maestright sic) in the Netherlands, which would have commissioned this binding from the Luchtmans publishers of Leiden. 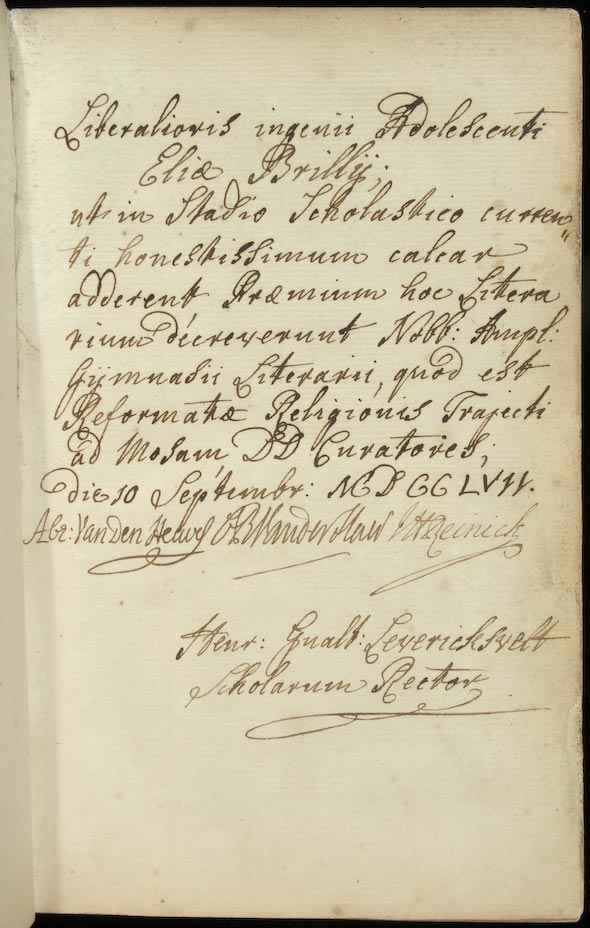 On the recto of the front fly-leaf, we can read the prize dedication in Latin, the so-called ex-praemio, dated September 10 1757. In brief, it says that in the current school year the curatores, or university representatives, in order to provide the most honorable stimulus, have awarded Elia Brillÿ, a youngster of a very liberal mind (liberalioris ingenii adolescenti) with this literary prize (praemium hoc literarium) from the Greek literary world, in the city of Maestricht (Trajecti ad Mosam) of the reformed religion. The dedication is signed by the rector (Scholarum Rector) Henr. Gualt. Levericksvelt. 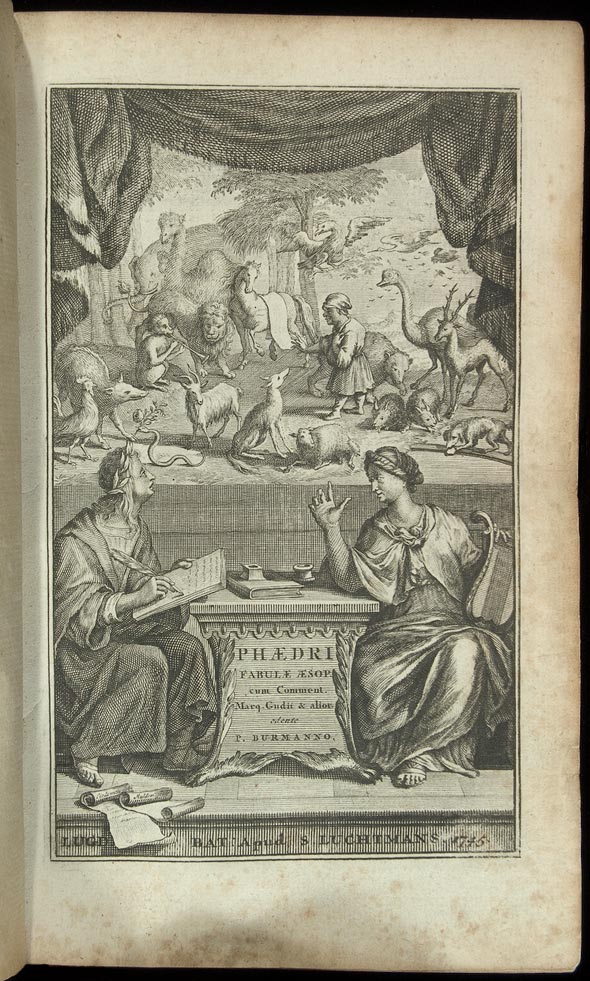 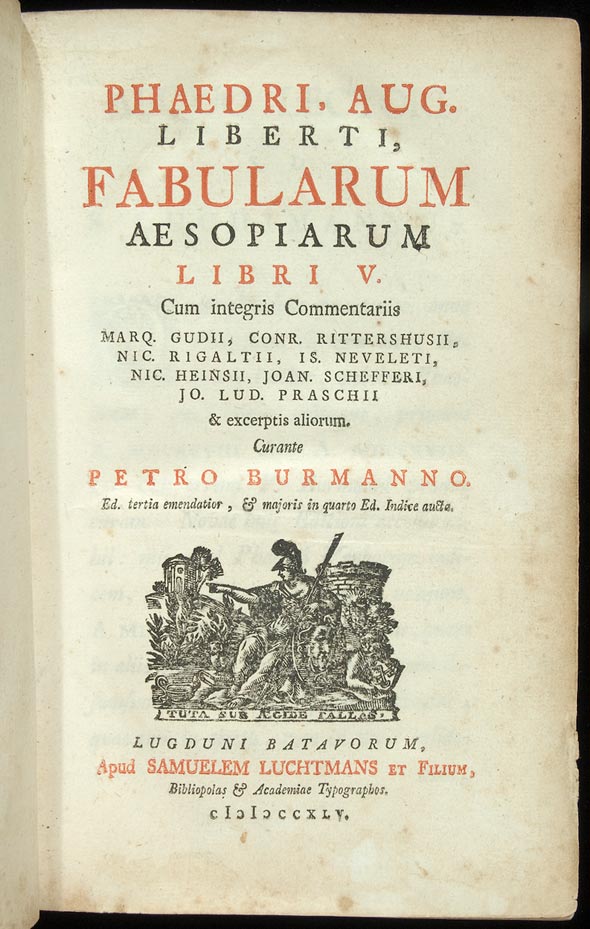 The Dutch scholar Pieter Burman (1668-1741)—in Latin Petrus Burmannus, and also known as "the Elder" to distinguish him from his nephew of the same name—first published an edition of Phaedrus' Fables in an octavo format in Amsterdam in1698. This was followed by two others in octavo and duodecimo formats published by Henricus Scheuleer in The Hague in 1718 and 1719 respectively. However, Burman's best known edition is the 1727 quarto published by Samuel Luchtmans in Leiden. It incorporated the notes by the famous English philologist Richard Bentley (1662-1742)! (Schweiger, 1834: 733-8; Dibdin, 1827: 281). Regarding the1745 octavo edition printed in Leiden, of which our Collection Highlight is a copy, Luchtmans presents it as being the third edition (Ed. tertia) coming after those of 1698 and 1718, and as being corrected (Emendatior) and augmented (aucta) by the rich index of the quarto edition of 1727. Indeed, a clever way to avoid the fact that this edition is basically a reprint of the quarto! Apart from the title page, see the publishers' preface Aequo Lectori. S.D.S. Luchtmannus.

Clearly, the book addresses not the needs of the young student learning the foundations of the Latin language, but the expectations of the future scholar interested in a deep philological examination of the text of the Fables. See, for instance, the image displayed below, where Phaedrus' verses are commented upon line by line, word by word. Even the text itself could be a challenge to young students, as Edward Harwood (1729-1794) observes in his View of the Editions of the Greek and Roman Classics(London: G. Robinson, 1782):

I have carefully read over Burman's edition of Phaedrus, printed at Leyden in 4to, 1727, and it is very correct, and does great honour to the singular erudition and critical acumen of that great man. It is astonishing to me, that they should use Phaedrus in some of the lower forms in several of our Grammar Schools. There are few Latin Classics that have more difficult passages than Phaedrus (Harwood, 1782: 195). 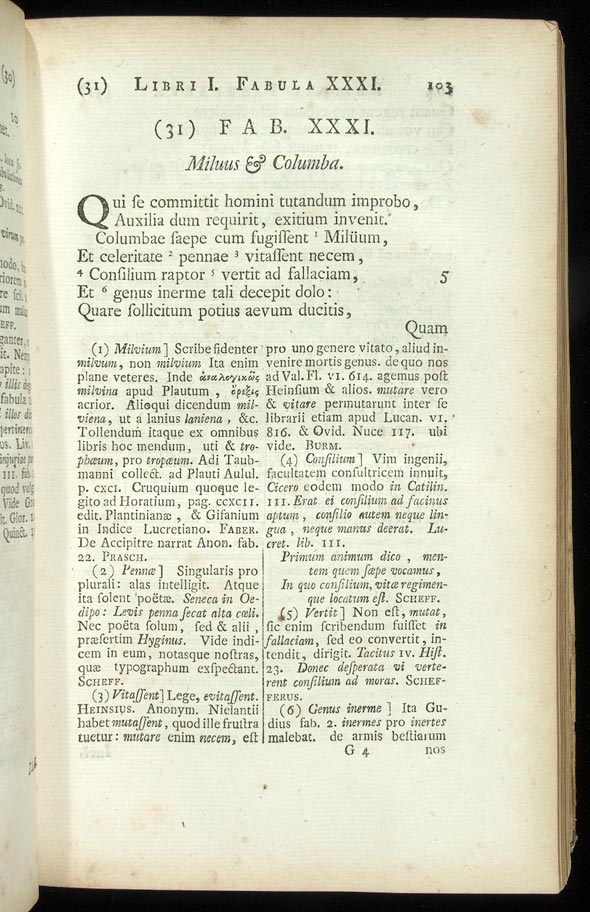 The purchase of our copy was made possible by the Dr. George Bowerman Fund (1966).

Dibdin, Thomas Frognall. An Introduction to the Knowledge of Rare and Valuable Editions of the Greek and Latin Classics. 2 vols. London: Hardin & Lepard and G.B. Whittaker, 1827.

Harwood, Edward. View of the Various Editions of the Greek and Roman Classics, with remarks by Edward Harwood. London: G. Robinson, 1782.