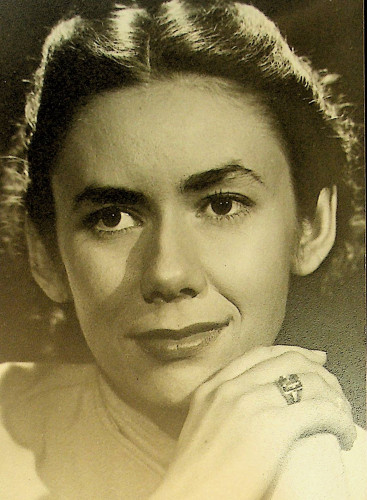 Joan Bondurant hailed from Great Bend, Kansas, studied the musical arts in college, and became an international spy all before turning 30 years old. For Women’s History Month, we are profiling this compelling historical figure and the unique trajectory of her life. From a young age, her curiosity for knowledge led her to queries relating to fields as rich and varied as anatomy, astronomy, and music. Her intellectual curiosity brought her to the University of Michigan, where she was enrolled in a double degree program for Liberal Arts and Music.1 Her writings about Debussy’s artistry in 1942 reflect a deep admiration for his work. She asserts that the beauty of music is what “dreams are made of” and that only “in song…[does] language [find] its freedom.”2 Bondurant never lost her passion for knowledge even as the world changed in unimaginable ways around her. With the Second World War looming to the forefront of the American consciousness, the US called for its citizens to acquire Japanese language skills.3 In this turbulent point in history, Bondurant declares that she “became deeply conscious of the world struggle and felt that [she] must become a more active part of it.”1

With this, she set forward to enroll in language courses and encountered a barrier known by many women all too well. Bondurant cites the University of Michigan’s “reluctance to admit women to the overcrowded Japanese” courses. Nonetheless, she gained admission and spent the spring, summer, and fall semesters studying the language in 1942, even earning an educational grant to do so.1 During this transitional moment, she reflected on her past studies in music, confessing that “in [those] days it [was] difficult to sing.”4 This reflection reveals one of the most fascinating aspects about Bondurant, which is how her heart guided her through such turmoil in the world. By 1943, Michigan Professor and Japanologist Robert B. Hall typed a letter to Bondurant asking if she still “[felt] inclined to go West” with the Office of Strategic Services in San Francisco.5

Off West she went and by 1944, the OSS transferred her to a field office in New Delhi. During her service in India, Bondurant exercised the intellectual curiosity stemming from her childhood in various research projects for the OSS.1 In letters written to her parents, Bondurant describes the many highlights of her travel and daily life. In one letter from August 14th, 1945, she wrote about a “breakfast of mangoes…from the bazaar, cocoa made from canned milk…, toast and sweet chutney.”6 These small delights and much more contributed to India’s profound effect on Bondurant. In 1947, she returned to India to immerse herself in the study of the culture and lived with a Hindu family, learning Hindi and even meeting many of the country’s leaders, such as activist Amrit Kaur and politician V.P. Menon.1 Bondurant also created a travel account for her friends and family called Sketches of India, which includes photographs and details of her time abroad.

The most impactful event was undoubtedly her meeting with Gandhi in 1946 at an ashram, or a religious retreat, in Calcutta. In the years Bondurant was in India, the country was fighting for its independence. Upon witnessing surges of violence within the country, Bondurant asked Gandhi about the techniques involved with Satyagraha and its “dynamics…in actual conflict situations.” In her writing, she reflects on this meeting years later, noting his “keen wit” and calling him the “preeminent problem-solver.”7 Upon his death, Bondurant wrote: “The life of [Gandhi] and his tremendous influence is proof that the final power lies in the good.”8 In her own obituary that she wrote many years preceding her death, she shares that their interaction drove her to an “intensive study of…[Gandhi’s] Satyagraha movement calling for non-violent defiance of the government.”9 Her interest in Indian culture and society shaped the scope of Bondurant’s work as she returned to the US and pursued a doctoral degree in Political Science at UC Berkeley.1 From 1952 to 1973, Bondurant served as a professor at Berkeley and then at the University of the Pacific until retiring to Tucson, Arizona. One of her most notable works in her field is undoubtedly Conquest of Violence: the Gandhian Philosophy of Conflict, which delves into Satyagraha as a political theory.9

If you are interested in learning more about the Gandhian scholar and her work, many of her articles are available online through River Campus Libraries, such as “Paraguerrilla Strategy: A New Concept in Arms Control,” “Traditional Polity and the Dynamics of Change in India,” and “New Sources for Countervailing a Legend: Personal and Political History in South Africa and India,” to name a few. To read more about the incredible women who worked for the OSS, Sisterhood of the Spies by Elizabeth McIntosh is also available through the university library. Last but certainly not least, RBSCP is home to the Joan V. Bondurant papers, which includes an extensive collection of her work, letters, photographs, and writings. Speaking of which, Bondurant’s musicality lived on through the poetry she wrote during her life. While living in New Delhi, she took stock of the seasonal transition to Spring and wrote “Quest.”10

Make torment of the heart

Can all thy tenderness deny

In faith or feckless fear?

Along what desolated strand

Need I be near?

Response from all who lately yearn

But yearn for whom?

And note this faith-tried loss

Which mocks thy seasonal flight as though

To others—but for me disclose