"Poetry as a Homeland:" A Willing Book Collection 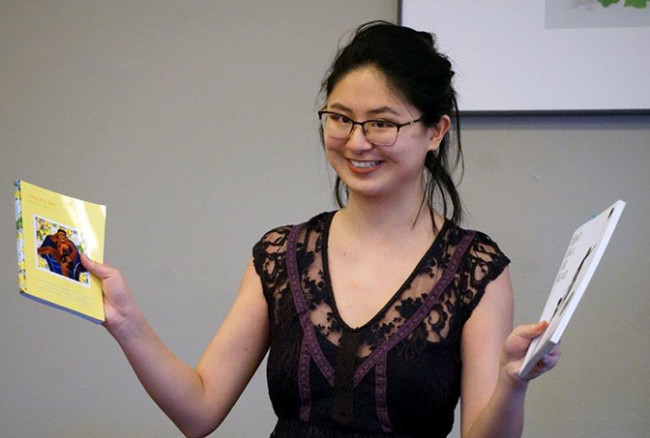 What follows is a condensed version of the winning essay and annotated bibliography submitted to the Book Collecting Contest by Erin O'Malley, a freshman majoring in comparative literature at the University of Rochester. The Friends of the University of Rochester (FURL) Student Book Collecting Contest has taken place for over twenty years. The contest is open to both UR undergraduates and graduates, through the submission of an essay that describes the purpose and method behind their book collection, why it is meaningful to them, and their ideas for its future development. The collections are not judged on size or monetary value, but instead on how the entrant describes the importance the collection holds for them personally.

he summer I returned to America, I realized I had no country to come back to. I had spent a year of high school abroad in Europe where I was bombarded with questions that seemed to sharpen the imaginary hyphen between the words “Asian” and “American.” Questions that are never ill-intentioned but are often tiring to answer. “Where are your parents or grandparents from?” “Can you speak Chinese? Japanese? Korean?” It was only when I traveled 3,854 miles across an ocean back to my hometown of York, Pennsylvania that I realized I’d been treated like a stranger in my own country for my entire life.

The United States has often felt like less of a homeland and more of a foreign planet to me, but discovering how poets of color—immigrants, resisters of colonization, and other revolutionaries—are able to use the language that is often imposed on them through uninvited assimilation in such hauntingly profound ways has given me the words to think critically about where I can belong and how I can shape the country I live in into that place of belonging.

Out of necessity, I began to collect books of contemporary poetry by writers of color. If I wanted to read a book of poetry written by someone born after 1970, I had to buy it myself. In contrast to the relative ease with which I was able to borrow works of prose from my school and public libraries, only rarely did these same libraries ever have an assortment of poetry books that rivaled their collections of science fiction or fantasy genre books. Additionally, the similarly dismal poetry aisles at Borders (and later Books-A-Million), one of the only bookstores in my town, meant that it was nearly impossible for me to purchase new books of poetry in person.

My decision to collect books of poetry by writers of color is a conscious act of solidarity. My goal in collecting works by diverse writers is to read their poems and listen to what those poems are saying about the experiences of their speakers and the world in which they take place.

Akbar, Kaveh. Calling a Wolf a Wolf. Farmington: Alice James Books, 2017.
Split into three sections: Terminal, Hunger, and Irons, Calling a Wolf a Wolf addresses addiction and recovery and what occurs between those stages. Woven into the book’s three sections are a series of different moments that depict the alcoholic speaker of the poem throughout his life, including “Portrait of the Alcoholic Three Weeks Sober” and “Portrait of the Alcoholic with Craving.” These poems craft the kind of arc of character growth that is rarely scene in poetry but depicts a complex change from beginning of the book to the very end, resulting in a richly detailed narrative. Later this Spring, Akbar will be doing a reading in Rochester, which I’m excited to attend and get my book signed.

Cancio-Bello, Marci Calabretta. Hour of the Ox. Pittsburgh: University of Pittsburgh Press, 2016. Signed.
The poems in this book describe Cancio-Bello’s own cultural crossroads as a Korean-speaking adoptee who has lived in the U.S. for most of her life. Hour of the Ox is also one of the few books I’ve been able to buy in person at an independent book. While I was in Miami, Florida for the 2017 National YoungArts Award ceremony, I came across a signed copy of Cancio-Bello’s collection at Books and Books.

Chen, Chen. When I Grow Up I Want to Be a List of Further Possibilities. Rochester: BOA Editions, 2017.

Christina, Dominique. They Are All Me. Albuquerque: Swimming with Elephants Publications, 2015. First Edition. Signed.
Spoken word poetry was my first introduction to contemporary poetry. I remember finding videos of spoken word poets performing at poetry slams across the country and being amazed at how the poems they wrote seemed to be so different from the 17th century rhyming poems that I read for school. One of the videos I came across was Christina’s performance of her poem “For Emmett Till” that won her the 2014 Women of the World Poetry Slam Champion title. Christina’s work, as exemplified in “For Emmett Till,” urges us to remember our histories and the inequalities that are still present because of the legacies of those histories.

Elhillo, Safia. The January Children. Lincoln: University of Nebraska Press, 2017.
The January Children is what gave the vocabulary to talk about phenomena like diaspora and displacement. Shifting between colonial Sudan and the present day region of Africa and the Middle East and her life in America and her life elsewhere, Elhillo introduces the complications of post-colonialism in straightforward but expressive verse. In her poem “Self-Portrait as Map,” Elhillo writes “& what is a country but the drawing of a line / today i draw thick black lines around my eyes & they are a country & thick red lines around my lips & they are a country... / & for every country that i’ve lost i make another & i make another.”

Limón, Ada. Bright Dead Things. Minneapolis: Milkweed Editions, 2015. First Edition.
Somewhere among the sprawling landscapes of California and Kentucky, Limón writes of her own life and the lives the exist around her. I added Bright Dead Things to my collection on the recommendation of a friend who encouraged me to seek out poetry that I might not normally gravitate toward (in this case poetry that tends to be more narrative). After reading this collection, I wrote one of the poems I read at the National YoungArts Foundation Literary Arts Evening, “I love the way men love,” which borrows its title from a line in Limón’s poem “Accident Report in the Tall, Tall Weeds.”

Sáenz, Benjamin Alire. The Book of What Remains. Port Townsend: Copper Canyon Press, 2010. Signed.
The Book of What Remains was the first book I ever accumulated for this collection. I first read Benjamín Alire Sáenz’s young adult novel, Aristotle and Dante Discover the Secrets of the Universe, and was mesmerized by its lyrical prose. After I read Sáenz’s other novels, I decided to also try reading his works of poetry, and his poems were the first contemporary “page poems,” as opposed to spoken word poems, that I encountered. Before I read Sáenz’s poems, I had always thought that page poetry was something that only professors could decipher, but reading The Book of What Remains’ interrogation of the U.S.-Mexican border is what introduced me to a kind of writing that resonates with how I experience language.

Share, Don, ed., “Poetry.” April 2016. Print. Signed.
In the spring of 2016, I had the opportunity to attend Split This Rock: Poems of Provocation and Witness, a poetry festival in Washington D.C., where I was able to meet and take part in workshops with so many of my favorite poets. This special issue of “Poetry” magazine was given to the attendees of Split This Rock and features the work of poets headlining the festival, such as Ocean Vuong, Regie Cabico, Reginald Dwayne Betts, and others.

Smith, Danez. Black Movie. Minneapolis: Exploding Pinecone Press, 2015.
Smith’s book, Black Movie, is a reminder that art—making it and engaging with it—entails action, especially action of a political nature. This work is a direct response to the 2014 (and continued) cases of police brutality in the United States. Poems like “Lion in the Hood” and “Short Film” utilize the language of cinematography to document black lives and their depiction in film. With this book, Smith locates the reader as a bystander and calls upon them to join his movement.

Vuong, Ocean. Night Sky With Exit Wounds. Port Townsend: Copper Canyon Press, 2016. Signed.
Ocean Vuong’s debut poetry book is by far my favorite book in my collection. To say his poems are beautiful is an understatement. They span from the lives of his parents in Vietnam to his time in New York City as a homeless man. I think I’m so drawn to his work because his poems are carefully crafted without sacrificing their emotional connection to the reader. When he writes about grief, or love, or his abusive father, Vuong’s poems are always careful but never clinically immaculate in their portrayal of his experiences. In my favorite poem in the book (and of all time), “Someday I’ll Love Ocean Vuong,” is the line “The most beautiful part of your body / is where it’s headed & remember, loneliness is still time spent / with the world.”

Willis-Abdurraqib, Hanif. The Crown Ain’t Worth Much. Minneapolis: Exploding Pinecone Press, 2016.
Although we might normally think that poetry has no muse in popular culture or the mundane, Willis-Abdurraqib, who is also an essayist and cultural critic, infuses his knowledge and love of hip-hop, rap, and punk music into The Crown Ain’t Worth Much. With poem titles like “Ode to Drake, Ending with Blood in a Field” and “At the House Party Where We Found Out Whitney Houston Was Dead,” Willis-Abdurraqib shows us the role media plays in our communities, specifically those that are shared among oppressed groups of people.

By: Book Collecting Contest winning essayist Erin O'Malley, a freshman majoring in comparative literature at the University of Rochester.